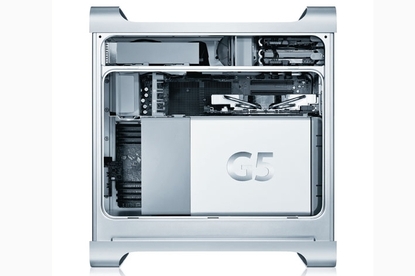 The Power Mac G5 Quad may seem expensive, but it's a bargain considering the additional processor cores. There's no reason for any professional facility not to upgrade because the equipment cost will quickly be recouped in the form of higher productivity and the ability to serve more clients faster.

Apple's brand-new flagship supercomputer is just that: super. While we average PC users may baulk at the cost and wonder why some of the base specifications are so 2003, regular Power Mac users will be salivating at the prospect. Like most Apple products we love to hate, the G5 Quad has a design aesthetic PCs simply can't match, but there's no quibbling about its main selling point: two dual-core processors. That's right. This machine is powered by four processors.

We have some advice: place your orders now, but be sure to pay a little extra for the three-year onsite warranty to ensure peace of mind. The standard one-year return-to-base warranty is paltry. The latest Power Mac offers substantial architecture improvements over its predecessor that can deliver exponential performance increases, depending on the application or function. The upgrades are numerous.

The increase in speed offered by the Quad is immediately noticeable. We witnessed effects in Final Cut Pro - a hugely demanding video suite - applied in real time to eight streams, and performance barely changed. It must be something to do with the total RAM throughput being 8.5Gbps (gigabits per second).

It's also worth noting that Mac OS X 10.4 and the G5 architecture can support up to 4TB of RAM. The machine isn't built to hold that much - 99.9 percent of users couldn't afford it - but if you fill the 533MHz double data rate 2 RAM slots with the 16GB of memory it can manage, you've got quite a performer. The Power Mac G5 now supports PCI Express. Each processor core has direct access to the front-side bus controller, and the new architecture supports 16 250Mbps lanes for a 4Gbps total throughput.

There's 150W of power in the bus, enabling high-end display cards to operate at peak performance. As well as the 16-lane graphics slot, there's room for three PCI Express cards, allowing a single G5 to support as many as eight displays.

On the graphics display, the nVidia Quadro FX 4500 is amazingly fast, sporting 512MB of synchronous dynamic RAM just for the card, and the piping gives it a look vaguely reminiscent of a Harley. The stereoscopic viewing option for the card enables scientists to experience molecules and other complex objects in true 3D.

Two independently configurable 10/100/1000Base-T (Gigabit) Ethernet interfaces deliver tremendous networking bandwidth with no congestion, while the antenna for Bluetooth and 802.11 has been redesigned as a strip on the back of the computer, removing the pesky antenna nub that gets lost or crushed against the wall.

As we mentioned before, the improvements in speed in the new hardware are dramatic. Our After Effects projects ran 60 percent faster compared with the dual-2.5GHz-processor Power Mac G5, and Apple says X-Code compiling is nearly 80 percent quicker than on earlier models. We found that Final Cut Pro standard-definition rendering yielded results that were 50 percent faster than with the dual-2.5GHz machine. Oh my Quad

The dual-core technology now used in the top-end Power Mac G5 puts two processors on one silicon wafer, with each processor allocated 1MB of Level 2 cache. The result is twice the computing power in the same space. In a dual-processor, dual-core machine (Apple refers to it as a quad-processor machine, although others call it dual-dual), you've got four processors, four 128bit velocity engines and eight graphics processing units. The speed increase on any computing work that can be broken up into parallel processing is exponential. Obviously, this Quad arrangement doesn't directly translate into four times the speed because it depends on whether the software being used is coded for dual-core applications. That said, it's much quicker than single-core, and multi-tasking is also much faster.