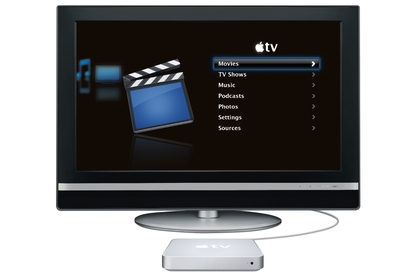 Although we feel it could do more, Apple TV is a simple and effective way to get content from your PC or Mac into your lounge room.

To say that Apple TV is the world's best media streaming device could be considered faint praise, the tech equivalent of calling someone the world's tallest midget. After all, most previous versions of these devices, which take music, video, and photos from your PC and play them on your TV and stereo, have been unreliable, hard to use and generally shunned by the buying public.

Apple has managed to rise above that kind of failure with its typical mantra: Keep it simple and make it pretty. Setting up Apple TV was a breeze, and anyone who's used an iPod will be instantly familiar with its extravagantly attractive interface.

With a 40GB hard drive for storing content, the sleek device appears to be able to avoid the picture break-ups and glitches that frequently come with streaming video over a wireless network. The basic rule of Apple TV content seems to be if you can play something in iTunes, you can play it on Apple TV. That puts some limitations on users, but then, that's the price of simplicity.

Apple TV looks a bit like the Mac Mini after an elephant sat on it. It measures 197mm x 197mm x 28mm and weighs 1.09kg. The unit only comes packaged with a power cord and a remote about the size of an iPod nano. Unfortunately, there are no cables included in the sales package, so if your television is HDMI equipped, you'll have to purchase a HDMI cable. In addition to HDMI, Apple TV also has ports for component and analog video connections.

Once connected to a television (which must be widescreen), Apple TV looks for a network connection. Using Wi-Fi, Apple TV can either detect your network after a search, or users can enter the network SSID using the on screen keyboard. The box is very quiet but got significantly hot after about an hour.

Users must link the Apple TV to a copy of iTunes on a PC or Mac, and the screen provides you with a passcode you must type into iTunes to make the connection. Then Apple TV starts copying your content from your iTunes library onto its hard drive in a specific order: first movies, then TV shows, then music, etc. There is no way to move something to the front of the line.

Once some of our video and music was on the Apple TV's hard drive, we started jumping around using the tiny remote. While the remote looks like an iPod, it doesn't quite act like one. What looks like a click wheel doesn't operate just by moving your thumb around the circumference of the wheel. Instead you need to click up, down, or sideways to move. While it's admirable that Apple has managed to shave a remote down to essentially six buttons, you'd better be careful of this one. The tiny remote is very easy to lose.

For video testing, we bought an episode of a new show from FX, "The Riches," from iTunes. Picture quality for this drama was okay, but not sensational. Overall, the images seemed a bit dark and washed out, even in colorful outdoor scenes. Apple TV can decode up to a 720p signal and output at up to 1080i. You may have trouble finding 720p content to display though, as the iTunes Store doesn't sell it. Apple TV will also play video that's not on its hard drive. But for that, you're dependent on streaming over your wireless network.

Music playback was very reminiscent of the iPod's interface, with lots of ways to view your collection. Album art for music playing displayed beautifully, so beautifully it made us wish we could navigate our collection by the cover art, like the cover flow view in iTunes. But this option isn't available. One other complaint is that once you leave the music area, the album stops playing. We would have liked to be able to continue listening to our choice while we were scrolling through pictures or watching a slide show.

As good as Apple TV is, we were still left thinking it could do more. For instance, it's got an Internet connection and a hard drive, so why do users have to download a video or album to their PC, then have it sync to the Apple TV? Wouldn't it be easier to cut out the middleman and have Apple TV connect directly to the iTunes Store?

Despite these reservations, though, Apple TV is more than just the tallest midget out there. It's the first media streaming device we could imagine recommending to a non-geek. And we wouldn't be surprised if it evolves into something even more powerful.