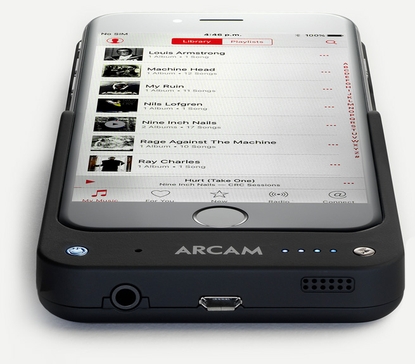 The MusicBoost feels good and only slightly boosts the size of an iPhone 6. But while the battery and audio enhancements work well, muffling the mic is a design flaw.

The MusicBoost case feels sturdy and easily slips on to an iPhone 6 or 6S. As with many other iPhone cases, no additional protection is offered to the screen. The addition of the case essentially pushes a 6S to the size of a 6S Plus.

The battery pack offers a 120% boost to the existing iPhone battery which it continually recharges as it goes. There’s a useful battery indicator to see what level it’s at too: you press a button and up to four LEDs light up.

But the main benefit of the MusicBoost s the Burr-Brown Digital-to-Analog-Converter (DAC). This is essentially an enhanced amplifier which makes music from the iPhone sound better – instead of using the iPhone’s built-in headphone jack, audio passes through the digital Lightening connector at the bottom of the iPhone and through the MusicBoost’s analog headphone port instead – and the difference is a noticeable improvement all round. Music sounds richer and fuller, even on the bundled, mediocre headphones that come with the iPhones.

So to this end, the MusicBoost does what it says on the tin. But it’s far from a qualified success. When the cover was on, ALL of the people we spoke to on the phone complained that our voice was too distant and quiet. This was whether music was playing or not.

As such, impinging on one of the prime functions of the phone knocks the overall score considerably. However, if you’re more interested by the music output enhancement then the high $299 RRP might seem cheap - although there are plenty of other DACs on the market that cost less and don't have a battery-extender included. For many other people the price will be too high for such a design critical flaw.