While most fighting games put little to no emphasis on the events leading up to the frequent beat-downs, BlazBlue has created a unique world 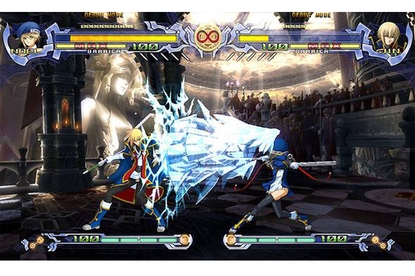 If you're looking for a unique fighting experience with tons of charm and wit then look no further than BlazBlue. Your thumbs may not forgive you, but the fighting enthusiast inside of you will feel right at home.

After a less-than-stellar change of pace with the 360 exclusive Guilty Gear: Overture, Arc Systems has returned to their fighting game roots with their latest epic brawler, BlazBlue: Calamity Trigger - and trust me when I say, it was worth the wait.

The Wheel of Fate is Turning

To say that BlazBlue has an "interesting" story is like saying Pocky is "kind of delicious". While most fighting games put little to no emphasis on the events leading up to the frequent beat-downs, BlazBlue has created a unique world, beautifully brought to life by its colourful cast of characters. It's so convoluted that I won't even try to explain it but it's a heck of a lot more interesting than the generic "fighters come together to beat each other up for no good reason" storyline found in most fighting games.

BlazBlue's story mode plays out like a visual novel, narrated with incredibly solid voice acting (dual language supported, at that) complete with actions and dialogue choices which affect the "plot." Each of the 12 characters has multiple endings so it pays to go back time and time again to try and find all of the "true" endings. It's great to slowly but surely see how all of the stories and relationships come together, but for the impatient, BlazBlue works just as well as a pick-up-and-play fighting game.

The Spice of Life

BlazBlue's gameplay is all about insane combos, outrageous special attacks and downright addictive brawling. Battles are rendered with beautiful hand-drawn characters and animations that really come to life in HD. The level designs are incredibly detailed as well: the multilayered stages beautifully mesh vibrant 3D and 2D backgrounds into unforgettable arenas.

BlazBlue's actual combat engine is similar to Guilty Gear's in the sense that it's easy to pick up, but difficult to master. Lighting-fast attacks demand careful precision, and while amateur players can get by with button-mashing, advanced players will no doubt take the time to learn the unique body-language, attack patterns and combat style of each character. It's an incredibly rewarding system and it'll especially pay dividends if you want to take your game online. You'll also need to develop your skills to survive the computer controlled characters-they aren't pushovers by any means.

While I absolutely adored my time with BlazBlue, it isn't for everyone. It lacks the realism and grittiness many gamers crave in next-gen fighters and the looming re-release of Marvel vs. Capcom 2 will no doubt push it out of the spotlight.