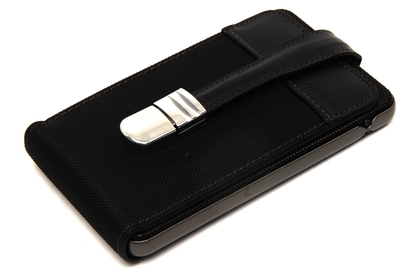 Astone ISO GEAR 290 (500GB) external drive enclosure provides an easy way to connect your 2.5in notebook hard drive to a computer, but it doesn't provide much protection from knocks and bumps an external hard drive will be subjected to.

Astone's ISO GEAR 290 is a 2.5in 500GB external hard drive that allows you to easily transfer and backup data from your notebook or desktop computer. Additionally, its enclosure is easy to open, so you can swap out the hard drive with one of your own choosing, so you're not forever stuck with the one provided. However, its perforated metal enclosure doesn't provides enough protection for the hard drive inside.

The ISO GEAR 290 external drive enclosure doesn't have an attractive design. The brushed metal texture on the underside of the enclosure is stylish but the faux leather flap makes the enclosure feel cheap. Lifting up the leather flap reveals the hard drive itself — a Western Digital 500GB Scorpio Blue notebook drive — which sits underneath a perforated metal cover.

Unfortunately, this enclosure provides little protection for the drive during rigorous daily use. The faux leather flap does not entirely cover the perforated shell and, as a result, the ISO GEAR 290 is more prone to knocks and bumps than other drives we've tested, such as the Transcend StoreJet 25M-R.

The ISO GEAR 290 external hard drive's USB 2.0 cable is attached to the enclosure, which means you won't forget to bring the cable with moving the drive. The cable slips into the leather cover when it's not in use.

The drive also has a one-touch backup button which can be configured using the Windows-only PC Clone EX Lite software (this can be downloaded from Astone's Web site). The software needs to be installed on the computer you plan to back up, but it is extremely easy to setup. You can choose the directories you want to backup to the external hard drive, and you can also set up a hot key to start the backup in addition to using the hard drive enclosure's one-touch button.

In both tests, the speeds are almost identical to the ISO GEAR 288 but the results are slightly slower than Transcend's StoreJet 25M-R transfer speeds.

Like the ISO GEAR 288, the ISO GEAR 290 external hard drive is available with a hard drive installed (as is the case with our review model) or as an empty drive enclosure. The empty enclosure without a drive costs $29. This means you can simply purchase the empty enclosure and add your own hard drive; or you can buy a version with a drive already installed and replace it at any time. Drive replacement is easily done by removing three small screws that secure the perforated cover. A small piece of rubber secures the hard drive and cushions it from potential vibration and movement.

We appreciate the additional features of the attached USB cable and one-touch backup button, but overall the ISO GEAR 290 external hard drive doesn't provide the hard drive with enough protection. Unless you particularly like the design of this drive, and its ease of drive access, we would recommend something more rugged and affordable.