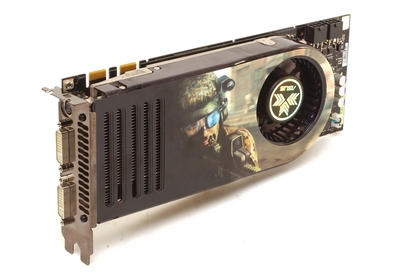 There's no doubt this is the best card on the market. Every feature is leaps and bounds ahead of the competition from ATI, at least until they release their own DirectX 10 capable card, the R600. The real question is whether to buy this card, or wait until competition brings the prices down and game developers actually start making games that utilise the new improved features.

The 8800 from NVIDIA represents the next major step in GPU architecture and is the first card capable of using the DirectX 10 API (Application Programming Interface) that ships with the Windows Vista operating system. The new G80 chip, the successor to the G71 chip found on NVIDIA's 7900 family of cards, is currently available on two new boards, the high-end 8800GTX and the slightly less powerful 8800GTS. We took the Asus 8800GTX through its paces on our new test bed.

The G80 chip introduces a couple of significant improvements, the first of which is to facilitate the new features of DirectX 10 and with it, Shader Model 4.0, which brings support for a geometry shader into the process. Much has been streamlined in both DirectX 10 and Shader Model 4.0, reducing overheads and allowing the GPU to do more, while also reducing work required of the CPU. The end result? Developers can cram more objects and ever increasing complexity into the rendered images, leading to even more stunning and detailed graphics. This improved efficiency also leaves headroom and a little future-proofing for physics processing to be done by the GPU.

The G80 (built using a 90nm manufacturing process) has gone through some drastic architectural changes, abandoning the sequential pipeline process for a unified pipeline. For starters, the days of judging a graphics card by its pixel shaders and vertex shaders are coming to an end. Instead the 8800GTX uses 128 stream processors with a clock speed of 1350MHz, which can be dynamically allocated to process vertex, pixel and geometry tasks. This removes the bottleneck on individual shaders when a scene is heavily weighted towards one particular task, as any stream processor can pick up the slack, allowing the GPU to prioritise shading tasks more dynamically. However, this ability makes the stream processors more complex, which at least partially explains why the transistor count has increased to 681 million.

On top of all this, some other power boosts will give this card significantly more grunt than anything in the previous generation. Firstly, it comes with a total of 768MB of GDDR3 memory clocked at 900MHz (1800MHz) with a 384-bit memory bus. Both NVIDIA and ATI have limited themselves to 512MB GDDR3, with a maximum 256-bit memory controller for some time now. NVIDIA released its 7950GX2 not long ago, with two boards, two GPUs and two lots of 512MB GDDR3 memory, each controlled by its own separate 256-bit memory controller. ATI did release the X1950XTX recently with 512MB of GDDR4 memory, a move not yet followed by NVIDIA. Nonetheless, neither will really compare to the capabilities of this card. Textures are handled at the core clock speed of 575MHz. Although the texture handling hasn't been given a great overhaul, the increased memory bus gives this card plenty of headroom for moving data around. This new card also brings NVIDIA on par with ATI as the 8800GTX can now render scenes that have High Dynamic Range (HDR) lighting with anti-aliasing (AA) on, where previously it could only do one or the other.

The power requirements have increased and you will need two PCI express power connectors to get the full juice out of this board. You'll also need significantly more spare room as this is by far the longest board we've seen and in some cases will match the length of your motherboard. It also takes up the space of two PCI express slots (though it only connects to one). If you plan (and can afford) to hook two of these monsters up in SLI mode you'll need at least a 650W power supply and plenty of spare room in your case.

We ran it through a couple of standard benchmarks using our newest test bed, which is composed of an Intel QX6700 Quad Core CPU, a 10,000rpm 150GB Western Digital raptor hard drive and 1GB of DDR2 800MHz RAM from Corsair, all on a Gigabyte GA-965P-DQ6 Version 2 motherboard with a Seasonic S12 Energy+ (SS-650HT) 650 Watt power supply running the show.

Not only were the figures impressive, but actual game-play and image quality during the benchmarks were excellent. In 3DMark 2006, using 8xAA and 16xAF (anisotropic filtering) at a resolution of 1280x1024 the Asus 8800GTX scored 7601. When cranked up to 1680x1050 it still scored an impressive 6348. We ran the FEAR in-game benchmark at maximum quality (with 8xAA and 16xAF) at 1280x1040, the max resolution it would allow without tampering with the configuration files, in which it scored an average of 107fps (frames per second), verging on double what you need for comfortable game-play. We did the same in Quake 4 on high quality with 4xAA, which it blitzed, getting an average of 174.7fps.

As is standard the card includes two DVI ports, both of which are HDCP compliant so, assuming your screen is also compliant, you should have no problems watching copy-protected high definition material. If you're still not convinced, the card also comes bundled with a copy of the latest Ghost Recon for PC.