ASUS DSL-N10 ADSL2+ modem router review: An all-in-one router that's simple to set up and use and provides reliable performance 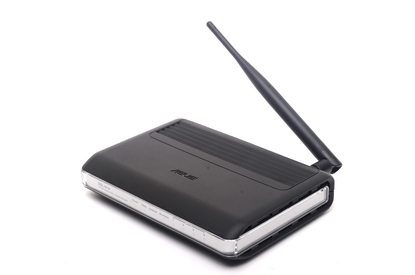 The ASUS DSL-N10 ADSL2+ modem router is simple to set up and use, and it's very affordable. For only $79, you'd be forgiven for thinking it might not be a top performer, but it actually did perform well in our ADSL2+ and wireless networking tests, and it was also reliable throughout our test period. Our only quibble is that settings take a while to take effect.

The ASUS DSL-N10 is an all-in-one modem/router without audacious styling. It's relatively small, it looks nice and it can be purchased for a great price of $79. It only has one antenna for its 802.11n wireless access point, but it performed reasonably well in our tests and can be used to distribute and ADSL2+ connection in a small home or office.

Setting up the ASUS DSL-N10 doesn't require a lot of effort: simply connect your phone line and your PC via Ethernet and go to its Web configuration page (192.168.1.1 with 'admin' being both the username and password). Its user interface, much like the interface on the ASUS RT-N56U wireless router, is very graphical and is laid out so that the first thing you see is a network map. It takes a little while to get your bearings and find out where all the settings are, but overall it's a clean and easy interface to navigate.

Getting onto the Internet is simple: all you have to do is click on the Quick Internet Setup wizard on the main page, select your ISP from a dropdown list (ours was iiNet), punch in your login details and wait about a minute for the modem to do its thing. The next step in the wizard allows you to set up the wireless access point SSID (network name) and security (up to WPA2). It took less than 5min to get online from the time we pulled the unit out of the box, to plugging in all the cables and entering our details — it was a very smooth experience.

The performance of the DSL-N10 was reliable during our test period and we didn't experience any unexpected drop-outs or slow-downs in the connection speed. Using PC World's Broadband Speed Test, the modem racked up an average download speed of 16.47 megabits per second and an upload speed of 859 kilobits per second. These speeds are what we expected the modem to attain, making the ASUS DSL-N10 a little faster than other recent modem routers we've reviewed, such as the TP-Link TD-W8950ND, Buffalo AirStation WBMR-HP-GN and even the pre-shipping version of the FRITZ!Box 7270 that we tested recently. It was only a smidgin slower than the Netgear DGN1000 modem router.

In our wireless networking tests, the ASUS DSL-N10 put up a good showing from both close and mid-range distances. In fact, it recorded the same transfer speed of 5.25 megabytes per second when retrieving data from our file server from 2m and 10m away from the router. In addition to distributing an ADSL2+ Internet connection, you could also use the DSL-N10 with a video streamer such as the Seagate GoFlex TV (STAJ100) or the WD TV Live Hub. The usable distance of the DSL-N10 will vary depending on your environment, but in our environment it was able to supply a usable Internet connection up to 22m away, which is around about what we expected.

The ASUS DSL-N10 has all the features you would expect of a modern home router, including QoS, port forwarding and DMZ features, which all help when utilising peer-to-peer networking or communications programs, and it also has URL keyword filtering, which is useful for parents who want to restrict the type of content their kids view online. Flagged words in URLs will cause the router display a standard error message in the Web browser instead of a clear message saying that the content has been blocked.

The only problem with the DSL-N10 is that it's very slow to accept any changes to its configuration (it takes about one minute after you apply changes) and some changes (such as port forwarding) require a restart. But for only $79, you can't go wrong. It's a very capable modem router with a nice interface — we particularly like the network map, which shows you at a glance how many computers are connected to the router and displays their IP addresses — and it's very simple to set up and use. If you're in the market for an inexpensive ADSL2+ modem router, then we say go for it.