A small PC for basic tasks 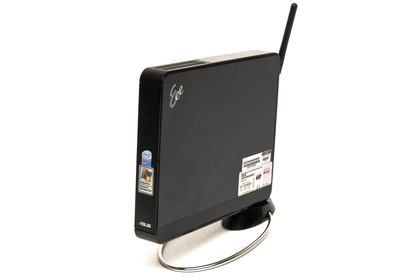 Its low power consumption, Gigabit Ethernet and small footprint mean its best use is probably as a PC for an Internet cafe. Home users might also want to consider it as a second PC for basic tasks, but office users might want to shy away from it due to its lack of an optical drive.

One thing's for sure: the ASUS Eee Box, like the Eee PC, is tiny and inexpensive. But while we like the idea of a slim PC for the home or the office, we wish that the Box was a better product straight out of the box.

ASUS has attempted to make the Box the smallest PC in the world (it's 22x18x3cm and weights about 1.25kg), and is aiming it at users in a few different markets — from point-of-sale scenarios, to research points in libraries, to small office users, to home users and kids. There's really no focus to this product. Its looks make it an exciting prospect for a media centre PC, but it lacks the functions of one. For an office PC we think it could also use a slot-loading optical drive.

To keep the unit under the magical $430 price point, and to be able to boast about the small footprint and weight of the unit, an optical drive has been sacrificed. Instead you get four USB 2.0 ports, Gigabit Ethernet, audio and DVI ports, and an SD memory card slot. On the inside, the unit relies on a 1.6GHz Intel Atom CPU, 1GB of DDR2 SDRAM, Intel 945G graphics and an 80GB hard drive. You also get an 802.11n wireless card built-in. So as you can see, it's very similar in functionality to the Eee PC 901, except you don't get the benefit of a screen and input devices, nor a solid-state drive or a battery.

Its configuration allows it to handle most office applications easily, and it will even supply enough grunt for some basic photo editing to be undertaken; however, it doesn't have enough power to be effectively used for encoding files such as MP3s. That shouldn't be seen as a negative though — it's simply not designed for that sort of work. What the Box is good for is word processing, Web browsing, viewing photos, and listening to music and watching videos. It handles all of these tasks well; when it works, that is.

We had all sorts of issues trying to get its Ralink 802.11n wireless adapter to work under Windows XP in 802.11n mode with our Linksys WAG160N wireless router. We chalk this up to being a Windows driver issue — when using the unit's Splashtop interface the wireless adapter worked like a dream and we were able to stream video and surf the Web with no problems.

Splashtop is available in some of ASUS' other products, such as the P5Q Deluxe motherboard. It's an embedded, Linux-based operating system that can be loaded in a few seconds. We configured the Ralink wireless card easily under Splashtop; its driver recognised WPA and WPA2 encryption methods and was able to connect to router without any problems. Splashtop has a Web browser, Skype and instant messaging functionality, and you can also use it to browse photos. It's a nifty feature for when you just want to browse the Web and can't be bothered loading Windows. Essentially, the inclusion of Splashtop makes this a dual-boot device — and you could even use it without a hard drive!

The Box isn't ideal as a media centre, because it only has a DVI output. If you want to connect it to a TV, you'll have to use a DVI-HDMI or DVI-Component adapter, depending on what type of connection your TV has. It also doesn't have an integrated infrared receiver, so you'll have to use up one of the USB ports for this function.

With its supplied stand, we think the Box definitely looks good enough to reside in a lounge room. If its wireless card didn't give us any problems under Windows, it would make a fine streaming device for MP3s and compressed video files. The 80GB hard drive is also large enough to store a decent library of files so you don't even have to use the wireless network if you don't want to, but it is probably more convenient to access files off a server.

While it's running, the Box makes only a slight whirring sound, which is its cooling fan, and it doesn't consume too much electricity. We obtained a reading of around 20 Watts while the unit was being used to surf the Web; while switched off, but still connected to the outlet, it consumed 1.5W. It ships with a tiny external power adapter and a collection of international outlet cords, should you ever decide to take the unit with you while travelling. Of course, you'd also have to take a monitor!

The Eee Box ships with a stand as well as a VESA-standard mounting bracket, so it can either stand up straight, or hang on a wall or the side of a desk. There's also a Kensington lock facility present, so that the unit can be tied down.

Overall, the Eee Box's low power consumption, Gigabit Ethernet and small footprint mean that its best use is probably as a PC for an Internet cafe. It could easily be hidden out of the way behind the monitor. It might be useful as a family's second PC for basic tasks, but office users might want to shy away from it due to its lack of an optical drive; after all, even we still get press releases sent to us on CDs!