We take a look at the netbook that some people are comparing to an Apple MacBook: the Asus Eee PC 1008HA Seashell. 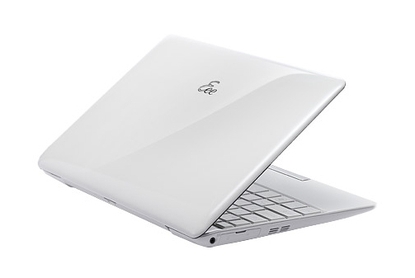 The Asus Eee PC 1008HA Seashell is thin, sleek, and light. Asus may be spitting out more revisions of its Asus Eee PC netbook line than we can count, but at least its designers are continuing to look at ways to refine the machine. The proof is in this new netbook.

The 92-percent full-size keyboard is big and comfortable, with a good layout. The Asus Eee PC 1008HA Seashell's buttons feel firm and large enough to type up a quick story. Even the metallic mouse-button bar is reasonably secure.

That said, we're a little concerned about the Asus Eee PC 1008HA Seashell's touchpad. On the device that we tried, we found little indication between where the touch area ends and where the wrist rest begins. But a spokesman assured us that the final unit will have bigger grooves so that users can feel their way around without having to eyeball the strike zone.

To accommodate the Asus Eee PC 1008HA Seashell's thin-and-light design, the creators of the 1008HA dropped a few ports — and made an interesting design move in the process. In a hidden compartment on the netbook's bottom sits a VGA adaptor dongle. When you need it, you simply pop it out and plug it into the mini-USB port on one side of the machine.

This is a pretty smart move that keeps the Asus Eee PC 1008HA Seashell's functionality while cutting down the size, and it minimises the chance of losing dongles.

One last thing that we need to mention is the sneak peek we had at the software that Asus plans to bring to its future machines.

The Asus Eee PC 1008HA Seashell's interface gives quick access to a host of shortcuts for useful features. The more interesting ones fall under tabs called 'Eee Arena' and 'Eee Sharing'. The Arena is basically Asus's attempt at creating an online download site for songs, videos, and games.

The Eee Sharing feature simplifies syncing documents between the Eee PC and other computers (as well as uploading files to online storage).

The Eee PC 1008HA has a lot to like, based on our initial glance. Once we've had a chance to lay our mitts on this little beaut in its final iteration, we'll be able to give you a definitive call on its performance. Stay tuned.