The ASUS Eee PC 1008HA (Seashell) is one of the best netbooks on the market due to its small size, good looks and relatively roomy keyboard. It's not perfect, but it's an appealing choice for anyone -- especially a traveller -- who wants a very mobile netbook that's still quite easy to use.

When we picked up the ASUS Eee PC 1008HA (or the Seashell, as it is known), we could tell that it was one of the nicest netbooks on the market — if not the nicest. It feels extremely well built and has a slim profile, concealed ports and a deceptively roomy keyboard. On the inside, it has a typical netbook configuration, so it won't win any sprints but it's fast enough to run Windows 7, browse the Web, chat online and create simple office documents.

It has a 10.1in screen with a resolution of 1024x600, which is much smaller than the 1366x768 resolution that's available on bigger netbooks such as the HP Mini 311. This low resolution can be a pain when cropping photos and even when displaying some dialog boxes, such as the ones in iTunes — they will be cut off at the bottom. The screen has a glossy surface that reflects light in bright environments, and this can be annoying when using the 1008HA Seashell outdoors. However, if you use it in the shade and angle it just right, it shouldn't be much of a problem.

While we love the strong feel of the base and the screen, we wish the keyboard was a little more solid. When you hit the keys, they feel a little loose and not as tactile as they should be. They also make an annoying racket when they're hit, so you won't want to use the Seashell at night while your better half is trying to sleep. The keyboard is surprisingly big, which aids touch-typing, and there are no keys located in awkward positions, nor are any of them undersized with the exception of the arrow keys. If it was just a little more tactile and less noisy, it would be the best keyboard we've ever seen on a netbook to date.

The small size and the slim profile of the ASUS Eee PC 1008HA (Seashell) give it a weight of 1.1kg. It's ideal for long journeys when you don't want to take a larger, heavier notebook with you. Of course, because it is so small, you might have trouble using it for long periods of time without getting tired — the keyboard is a good size for a netbook but it's still cramped. Users with small hands will definitely find the going easier than those with larger ones.

Not only is the netbook small, its power adapter is also tiny — the entire package is very easy to carry on the road. The power adapter is only 8.5x3.5cm and has ample cable length. When it's not plugged in to an outlet, the 1008HA's 6-cell battery will last approximately 2.5 hours, unless you implement a power management strategy and use a low screen brightness setting.

The CPU that runs the 1008HA Seashell is an Intel Atom N280, which has a clock speed of 1.66GHz; you also get 1GB of DDR2 SDRAM, an integrated Intel GMA950 graphics adapter and a 5400rpm, 250GB hard drive. In our WorldBench 6 benchmark suite the Seashell attained a score of 33. This means it will be slow when running many office and content creation applications. This was also shown in the iTunes MP3 encoding test, in which it recorded a slow time of 10min 15sec. This is almost 3min slower than similarly configured netbooks. But the Eee PC 1008HA isn't designed for taxing tasks, and if you want to create content and encode music regularly then a netbook isn't for you anyway.

After using the netbook for a long period of time, its base will get slightly warm but it is not too uncomfortable. It has an air vent on the bottom, which means it will warm up faster if you use it on your lap and block the vent. The notebook also has an extraction fan and a vent located on the left side. We like the way that ASUS has kept the profile of the netbook as thin as possible by omitting bulky ports such as an integrated D-Sub (VGA) port, and by placing the 10/100 Ethernet port at the thickest part of the base near the spine. For those of you who want to hook up an external display, ASUS has cleverly placed the D-Sub port on a dongle that's in a concealed compartment in the notebook's base. Simply release it and plug it in to the mini-jack on the left side of the netbook. All the ports have covers, so the netbook looks very slick. It can be annoying to have to move the covers every time you want to plug in a peripheral, however. 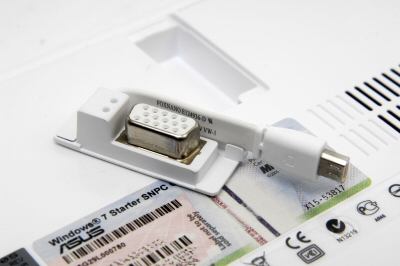 The D-Sub (VGA) port is concealed in the base of the unit. 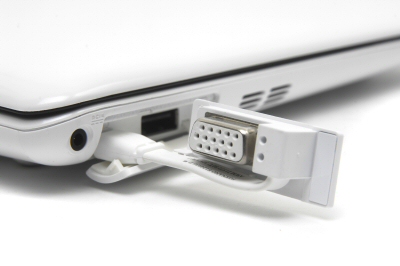 It can be connected to a mini-jack that's concealed on the left side of the netbook. This system has helped keep the Seashell very slim.

There are two USB 2.0 ports, headphone and microphone ports, an SD card slot, and the afore-mentioned Ethernet port and minijack for the D-Sub port. You get a webcam, which is built in to the screen, and you also get Bluetooth and 802.11n wireless networking.

There's not much to dislike about the ASUS Eee PC 1008HA (Seashell). It's well built, has plenty of style, is very light and has a deceptively large keyboard. However, we wish its keyboard didn't make so much noise and that it was a little more sturdy. We'd also prefer a non-glossy screen. These are small issues though, and overall we think the 1008HA Seashell is a great choice if you're after a slim and light netbook for writing notes, dumping photos on and browsing the Web while you travel.