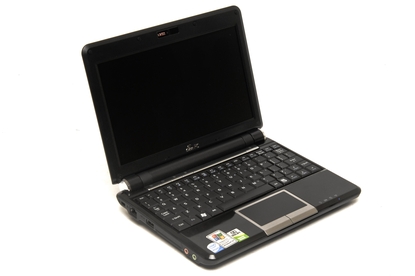 The 901 is better than the 900, thanks to its faster CPU and networking features, but it's still small and will take some time getting used to. Nevertheless, the more you use it, the more you fall in love with it. It's great for taking it on the road with you, for working with office applications, and also watching videos.

Weighing 1.1kg, the Eee PC 901 is slightly heavier than its predecessor, the 900, and it also sports a slightly different chassis and design. A glossy black finish gives the 901 a touch of menace and street cred, but it's the guts of the unit that are most noteworthy.

The Eee PC 901 makes use of Intel's Atom CPU instead of a Celeron CPU. The Atom is better-suited to the Eee PC in a couple of ways. It's built using Intel's 45nm technology, so it's a much smaller CPU than the Celeron, and therefore consumes less electricity and runs cooler. This also means that the 901 will last longer away from a power outlet than the Eee PC 900 (Windows XP version).

In our worst-case scenario test, where we looped a DivX-encoded video while the brightness of the screen was at its maximum level, the 901 lasted just over five hours, which is a phenomenal result. It has a 6-cell battery with a rating of 6600mAh (milliamp hours) and its thickness gives the laptop a nice little lean when it's sitting on a table.

The Atom in the Windows XP-equipped 901 that we reviewed also supports Hyper-Threading. This means that it will multitask better than the 900 — so you can listen to music while surfing the Web and working in a word processor, without noticing too much of a slow-down in performance.

However, we did sometimes experience long response times when loading applications or opening windows, so the new processor doesn't totally eliminate sluggishness. The 901 has the same amount of RAM as the 900 — 1GB — and also has the same storage options. The Windows XP version comes with 12GB of storage capacity: a built-in 4GB solid-state system drive, and a secondary 8GB solid-state data drive. This means you can't store too many multimedia files on it, which is a shame as the unit is delightful to watch videos on. The upside of the solid-state drives is that they are silent, produce less heat and can't be easily damaged by bumps and vibrations. File transfer tests showed the drive to be sluggish; it recorded an average rate of 9.52MBps.

The notebook's 16:9 widescreen, 8.9in display is bright and vibrant and can be viewed easily even in direct sunlight. It's perfect for outdoor usage and it doesn't suffer from poor viewing angles. Videos looked great, and they played without any stuttering. We were surprised by the audio quality of the unit: for such a small notebook, the volume is adequate, and the laptop does a good job of covering low and high frequencies and everything in between. Of course, you can also plug in headphones, but if you're watching a video with a friend or your SO then the speakers will do a great job.

With a resolution of 1024x600, the screen is comfortable for Web browsing and office application usage, and you can use the D-Sub port to hook up a secondary display while you're at home or in the office. It'll run a large monitor (we tried a 24in LCD with a 1920x1200 resolution) without any problems. We didn't notice any tearing while viewing standard-definition DivX-encoded files on a big screen.

Physically, the 901 is 22.5cm wide, about 18cm deep, and 3cm thick at its thickest point (at the rear, due to the battery). It's very easy to use on public transport. In fact, most of this review was typed while on a reasonably packed bus. Like the 900, the 901's keyboard is small, so it will take some getting used to. The period key is very small, and the '1' key is located right at the edge of the keyboard; both these keys take a long time to get accustomed to. The large touchpad is a little unresponsive and sticky, which means you sometimes end up clicking on the wrong menu items or icons.

Another big change under the bonnet is the 802.11n wireless adapter, which improves the Eee PC's wireless networking speed and makes it more suitable to use when connected to a fast ADSL2+ connection. We were able to connect to our Belkin N1 Vision Modem Router at a speed of 135Mbps, but we did experience some intermittent drop-outs. The 900 only had 802.11g networking.

Wired networking is also faster, thanks to the Atheros AR8121 chip, which supplies Gigabit Ethernet speed instead of a maximum of 10/100. You also get Bluetooth, which can be used to connect wireless headsets for use with programs such as Skype, or just to grab data off your mobile phone.

There are three USB 2.0 ports and an SD memory card slot, but the Eee PC 901 lacks a second, dedicated SD storage slot — like the one seen on the Acer Aspire One — which could have been used to bolster the unit's internal storage capacity (under Linux especially, because a dedicated slot could be treated as part of the notebook's main filesystem). Still, the SD card slot supports SDHC cards and allows you to store large video files and stacks of songs without exhausting the internal storage space.

Overall, the Eee PC 901 is much better than 900, thanks to the Atom CPU, and the faster networking options. It doesn't get too warm after it's been running for a while, nor does it make much noise except for its little cooling fan. It's very well built and very portable, but it could use more storage space. The Linux version is better in this regard, as it ships with 20GB worth of storage.