The Eee PC S101H, the latest ASUS netbook, isn't only about style; it's also got plenty of substance. 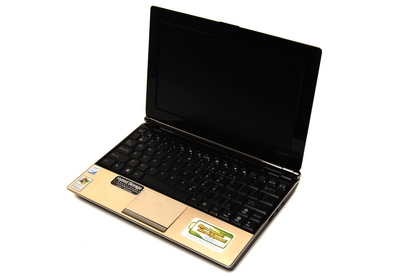 If it's good looks and ease of use you desire, this well featured netbook will be right up your alley. It also has 802.11n Wi-Fi, which is faster than most other netbooks on the market, and you get a 160GB hard drive.

The tiny 10.2in ASUS Eee PC S101H netbook makes a fashion statement without resorting floral designs or a blaze of red colouring; it's a champagne-coloured notebook with chrome along the sides and on the hinge, and it has graphite-styled keys. It definitely looks like a high-class product, and for a netbook it has a high price tag. However, it also has one of the more desirable feature lists.

Like most netbooks, the ASUS Eee PC S101H runs Windows XP and has a 1.6GHz Intel Atom CPU and 1GB of RAM. However, unlike most netbooks it has 802.11n wireless networking. With a keyboard that is only a fraction bigger than the one found on the Acer Aspire One AOD150, the ASUS Eee PC S101H is surprisingly comfortable to type on once you get used to it, but typing for long periods of time can become uncomfortable.

Touch-typists might lament the misplaced (and small) right Shift key, but that's the only blemish on the 82-key keyboard.

Using the notebook on your lap for long periods of time won't be a problem, as the unit only gets mildly warm after more than two hours of continual use; it has a rear vent and extraction fan that combine to do an efficient job of keeping the unit cool. Its palm rest area is relatively roomy and the touchpad is large but a little sticky. Furthermore, the notebook's left- and right-click buttons use a single piece of plastic, which makes them awkward to press.

Even though it's aimed at users who want to make a fashion statement, the Eee PC S101H is also friendly to tinkerers. It has access panels on its base that can be removed with a Philips screwdriver to allow you to quickly access the memory and hard drive compartments. The Eee PC S101H has a conventional notebook hard drive, which spins at 4200rpm and gives the netbook 160GB worth of space. It's this drive that differentiates it from the ASUS Eee PC S101, which has a solid-state drive.

In our tests, the Eee PC S101H performed as expected. It returned a time of 8min 53sec in our MP3 encoding test. This is much slower than the Eee PC S101. The Eee PC S101H's hard drive recorded a transfer rate of 19.38 megabytes per second, which is a good result and compares favourably with many standard notebooks.

The ASUS Eee PC S101H comes with a 31Wh-rated (Watt hour) battery, which offers a longer running time than the HP Mini 101TU and Acer Aspire One AOD150 netbooks. Our video run-down test lasted 2hr 24min. This is 4min longer than the HP (with a 26Wh battery) and 14min longer than the Acer (with a 23.76Wh battery). We tested the Eee PC S101H with the wireless connection enabled and the brightness all the way up, with the high performance setting enabled. ASUS provides a button on the chassis that switches between battery saving, auto-power saving and super performance modes.

Even though the Eee PC S101H has an LED-backlit screen like the HP and Acer notebooks, it's not suitable for watching videos while on the go — its brightness and contrast are not as good as the HP and Acer. In bright environments videos become difficult to see but typing is still possible.

The netbook feels solid, but some features feel awkwardly placed. For example, the SD card reader is situated on the spine, rather than the sides or the front, so you have to turn the unit around in order to plug in your memory cards. The front has two speakers that get muffled if you use them while the netbook is on your lap. You're better off listening through headphones anyway, as the speakers aren't particularly loud.

One thing we found out about this Eee PC's good looks is that if you want to maintain them, then you should protect the unit by placing it in either the supplied soft carry pouch or your own hardened case. Simply chucking it our backpack with the power supply caused one of the power plug's prongs to scratch the paint on the notebook's lid.

For $999, the Eee PC S101H is definitely expensive for a netbook, and only those with a penchant for style should consider it. In saying that, the fast wireless networking and slightly better battery life than competing 10.2in netbooks are appealing.