The ASUS G51J is a pricey 3D notebook that's aimed at gamers. It has a powerful CPU, lots of RAM and a fast hard drive, but it needs more graphics grunt to compete against conventional gaming notebooks. Consider this model only if you want to be an early adopter of 3D technology and want a more immersive notebook gaming experience, but don't expect all of your older games to look good in 3D. That said, when you do run a good 3D game or watch a well-shot 3D movie, the experience is a very pleasant one.

The ASUS G51J 3D gaming notebook bears an illuminated ASUS Republic of Gamers badge on its lid, so you know from the outset that it's not designed for pedestrian computing activities. It's one of the few gaming notebooks currently on the market that has a 3D-capable screen, and it's NVIDIA 3D Vision–ready. This means it ships with a pair of NVIDIA active shutter glasses and a receiver so that you can take advantage of the 3D screen. Not only can you play new (and existing) games with greater 3D depth (some games look better than others), you can also watch movies that have been recorded in the stereoscopic 3D format, and the notebook comes with a Blu-ray drive. However, it's not a completely cutting-edge notebook — it could use a faster a graphics adapter — and it is expensive.

With a 15.6in screen (1366x768) and a chunky base, the ASUS G51J can't be used comfortably on your lap; instead, you'll need to confine it to a desk and make sure there is plenty of space on its left side for the vent to extract the warm air created by the graphics card and CPU while you're gaming or performing any type of intensive task. There is a reasonably powerful configuration under the hood of this notebook that helps it not only run many of the latest games, but also to undertake media encoding and editing tasks in addition to mundane productivity tasks.

The notebook features 8GB of DDR3 SDRAM and an Intel Core i7-720QM CPU, which has four cores, Hyper-Threading (for a total of eight virtual cores) and a frequency of 1.6GHz. It won't be super-fast in applications that can't use all of the CPU's cores and Hyper-Threading; for example, it only recorded a time of 1min 16sec in our iTunes MP3 encoding test. The ASUS K52Jr, which has a Core i3 CPU with four virtual cores and a speed of 2.26Ghz, recorded a time of 1min 11sec in this test. In the Blender 3D rendering test, in which all of the virtual cores can be used, the ASUS G51J recorded a time of 47sec — this is the same as the Acer Aspire 8943G, which uses the same CPU, and it's only 1sec off what the slightly faster Dell XPS 17 (X1710) recorded. 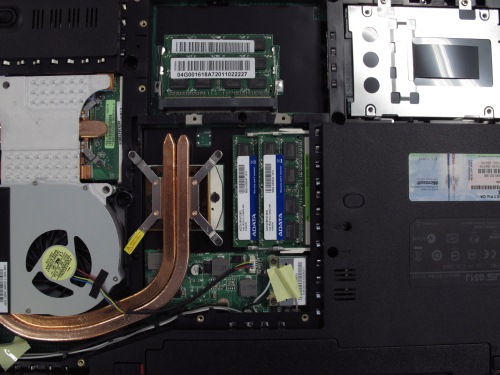 One aspect of the G51J that really impressed us was its insanely fast hard drive — a 7200rpm, 500GB Seagate Momentus 7200.4 ST9500420AS — which clocked 88.33 megabytes per second in our tests. This is the fastest transfer speed we've recorded in a notebook that doesn't have a RAID array (although it does support two hard drives). While the speed will be great when the notebook is new, the more the drive is filled over time, the slower it will get as the heads will have to traverse farther across the platters in order to retrieve and write data.

The graphics adapter in the ASUS G51J is an NVIDIA GeForce GTS 360M with 1GB of RAM, and this is a mid-range adapter rather than a top-shelf model. It's not as fast as the adapter in Dell's XPS 17, nor the one in Acer's 8943G. This was shown in 3DMark06 where the ASUS recorded a score of 6680 — the Dell and Acer notebooks recorded over 8000 and over 10,000, respectively. Even the sub-$900 Medion Akoya P6624 recorded over 7000 in this test. Nevertheless, the G51J's mid-range adapter can still run most games on the market, albeit without all of their available eye-candy enabled.