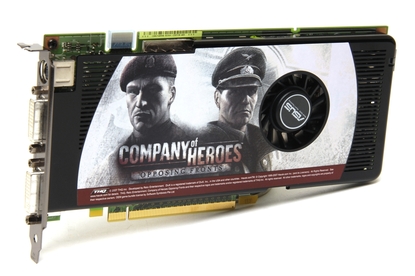 Considering the price this is a very good card. It's fairly on par with NVIDIA's own 8800 GTS and will keep keen gamers happy, though it won't run the latest games at the highest settings.

The new card has a few main advantages. First and foremost it offers a far more comfortable price point as a high- to mid-range card, while still offering some fairly impressive performance results. This is going to put mounting pressure on ATI's Radeon cards, which have been relying on their price to keep gamers interested. The second notable feature is the new heat sink, which is thinner and occupies just one PCI slot, unlike its larger brothers, the GTS, GTX and Ultra editions. Like the GTS this card requires just one PCI Express power cable to run.

The ASUS GeForce 8800 GT takes a step back towards last year's flagship cards by offering a total of 512MB of GDDR3 RAM, rather than the obscure amounts of 640MB and 768MB found on the more powerful 8800's. It also drops back to a 256-bit memory bus, which is again reminiscent of last year's 7900 cards. However, aside from the memory and bus speed, the GeForce 8800 GT has actually been made more powerful.

It has a total of 112 stream processors at its disposal; 16 less than the GTX but 16 more than the GTS. It also has a faster core clock speed than the GTS and GTX at 600MHz, and equals the GTX memory clock speed at 900MHz (1800MHz effective). Nonetheless, due to its lower memory bandwidth, it still has a throughput slightly less than that of the GTS, offering 57.6GBps.

In our benchmarks the ASUS GeForce 8800 GT scored some very healthy results. In the DirectX 9 (DX9) and DirectX 10 tests (DX10) we saw playable frame rates with high quality settings enabled on all games, though the DX10 tests were only just playable. In Half-Life 2 at 1920x1200 with all the settings on maximum it scored an average 122fps (frames per second). In FEAR with a resolution of 1600x1200 and maximum quality settings it averaged 68fps. In 3DMark 2006 at the default settings it scored 11,572.

In the Crysis GPU benchmark using 1920x1200 and high quality settings it averaged 20fps. In the Lost Planet: Extreme Condition DX10 version it averaged 70.4fps at the default settings, then 30.8fps using 1920x1200 and with all DX10 features on. In the Call of Juarez DX10 benchmark it averaged 25.7fps using the default settings. In Company of Heroes: Opposing Fronts, the included game, ASUS GeForce 8800 GT averaged 35fps. This last test was done using the auto-detected settings, which were mostly medium to low, and using a resolution of 1920x1200.

All in all the 8800 GT handled DX9 games well, producing frame rates well above the optimum 60fps watermark. These tests are all run with high quality settings enabled, meaning your games will also look good at these frame rates.

In the DX10 tests we got good frame rates at medium quality settings, but started to push the envelope until it was beyond playable with higher quality settings on. Still, we feel that this card will manage even the prettiest games like Crysis at reasonable quality settings in high resolutions.