ASUS K52Jr review: A 15.6in, Core i3 notebook with good graphics performance for the price 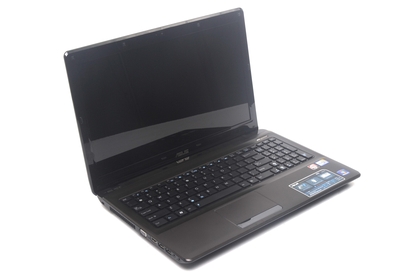 The ASUS K52Jr (K52JR-SX070V) is a fine desktop replacement-style notebook with a manageable footprint that allows it to also be transported relatively easily between home and the classroom or office. It possesses good graphics power for its price and it's a comfortable notebook to use overall. However, we wish it had slightly better battery life and that it had a screen that was less reflective and had better viewing angles.

The ASUS K52Jr (K52JR-SX070V) is a solid 15.6in notebook with an entry-level Intel Core i3 CPU, a discrete graphics card and a large hard drive. It makes for a decent desktop replacement–style computer for office and media tasks, and it's also a reasonably easy notebook to carry to and from a classroom. The best part is that it can also be used for some gaming.

A glossy lid and a textured palm rest make the K52Jr (K52JR-SX070V) a reasonably elegant machine and it doesn't have annoying, ultra-bright LEDs. Its status lights are subtle and as there aren't any shortcut buttons above the keyboard the notebook looks very clean and simple.

The keyboard has a chiclet design and it packs in a number pad. The number pad has been squished to fit, which has resulted in the right arrow key being placed under the '1' key and directly next to the '0'. This makes the arrow keys (and the '0') hard to find unless you're looking at the keyboard, and this somewhat negates the usefulness of the dedicated number pad. The keyboard feels solid overall, but the keys offer a little too much resistance.

The large palm rest (95mm) makes it comfortable to type for long periods, and the 90x53mm touchpad (which supports gestures) doesn't get in the way. The K52Jr actually features 'automatic palm detection', which can halt touchpad commands if it senses that you have accidentally smothered it and this worked well during our tests; when we dragged lots of flesh over the pad, the pointer moved a few pixels and then stopped dead in its tracks. We do wish the touchpad's left- and right-click buttons didn't share the same piece of plastic — the right button is tough and doesn't feel good to press.

The weight of the unit is a shade over 2.6kg, which is similar to many other 15.6in notebooks we've reviewed, such as the Samsung R590-JS02AU and the Dell Inspiron M501R. You can use the notebook on your lap while you respond to emails or type up a document and it won't feel too uncomfortable; nor will it get too warm unless you are running a 3D game.

You can watch movies on the notebook's 15.6in glossy screen, which has a resolution of 1366x768, but you might have to constantly adjust the screen as you change viewing position because it has poor vertical viewing angles — as do most notebooks on the market — and reflections will also be a problem. The speakers built in to the notebook are useful for when you're watching videos and you're sitting very near the unit. As they aren't very loud, they are not great for listening to music; you'll definitely want to plug in a pair of headphones or external speakers.