A high-performance ASUS notebook with an inbuilt Blu-ray player 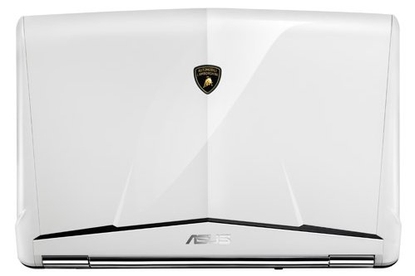 The Asus Lamborghini VX5 notebook is a marked improvement over its predecessor, sporting better specifications at a more affordable price. At the same time, it remains a prohibitively expensive status symbol for elitists. If you want a notebook that will turn heads, it's pretty hard to beat.

Like its Italian namesake, the ASUS Lamborghini VX5 needs little introduction. Over the past few years, we've reviewed a suite of these ultra-deluxe notebooks, with each new model impressing on the performance front, but bombing out when it comes to affordability. (To be fair, you'd hardly expect a notebook named after a luxury sports car to be cheap now, would you?)

This latest model off the showroom floor boasts more raw horsepower than ever before — and a slashed price tag to boot. At $3499, the ASUS Lamborghini VX5 notebook isn't exactly a bargain, but it is $1100 less expensive than the previous model we looked at. Unlike Lamborghini, it would seem ASUS has finally struck a reasonable balance between price and performance.

Before we go on, special mention must go to the VX5's hysterical marketing material. Apparently, it was made with "poetic precision" and "atelier craftsmanship". Also, it's "the superlative of avant garde design" that "triggers the primeval senses for exhilaration and power". It's not just a notebook, "but more of an art-form". Believe it or not, this is actually a step down from the last Lamborghini model, which ASUS described as a "living, breathing machine." But anyway...

The first thing that stands out about the ASUS Lamborghini VX5 is its glossy new paintjob. The previous version we looked at — the ASUS Lamborghini VX3 — sported an eye-searing canary yellow finish. While a luxury sports car can just about get away with this look, we're not sure the same can be said of a luxury notebook. Thankfully, for this latest model, ASUS has opted for a more subdued white finish (or 'pearlescent', it says here). It might not be as iconic to the Lamborghini brand, but it definitely makes for a better looking notebook.

The VX5's curvy lid still demands attention with its Lamborghini badge and car-inspired vents. Like the ASUS Lamborghini VX3, it looks uncannily like a fancy car bonnet — all that's missing is a swanky hood ornament made out of ivory or gold. The sports car styling also extends to the notebook's interior, with a plush leather palm rest complimented by tasteful white stitching. The backlit keys are also attractive and suitably tactile. As we noted with the Lamborghini VX3, this is the kind of notebook that envious passers-by will want to spit on — just like the car it derives its name from.

Adding to the automobile effect, the Lamborghini VX5 makes a 'revving' noise when you boot it into action. Unfortunately, the audio sample is decidedly tinny and underwhelming — it sounds more like an ASUS Moped with a potato stuck in the exhaust. In fact, the VX5's speakers are one of the product's few weak points. While the inbuilt stereo speakers do a good job, they lack the 'oomph' you'd expect from an entertainment notebook. That said, they remain perfectly adequate indoors — and this is supposed to be a desktop replacement.

In addition to a slick new paintjob, ASUS has also made some major additions beneath the Lamborghini's hood. Chief amongst these are two 500GB hard drives, which replace the 320GB, 5400rpm hard drive found in the VX3. Other noteworthy 'engine parts' include a Q9000 2.2GHz Core 2 Quad CPU, 4GB of DDR3 RAM, a GeForce GT 130M graphics card and a 16.1in Full HD display with excellent viewing angles. The ASUS Lamborghini VX5 boasts a Blu-ray optical drive as standard, along with the usual connectivity options (an 8-in-1 card reader, four USB ports, an HDMI output and 802.11n wireless).

In our benchmarks, the ASUS Lamborghini VX3 produced solid results for the most part. While it only returned a score of 68 in WorldBench 6, its real-world tests were a lot more impressive. In our Blender 3D rendering and iTunes MP3 encoding tests, the Lamborghini VX5 recorded times of 1min 14sec and 1min 23sec, respectively. In 3DMark 06, the VX5 returned a score of 6535, which is decent for a notebook. It will be able to render real-time 3D graphics without breaking a sweat, making it a suitable gaming machine.

The ASUS Lamborghini VX3's battery held out for one hour and 18 minutes in our video rundown test. This isn't quite enough to get you through a feature-length movie, but remains acceptable for a notebook of this size.