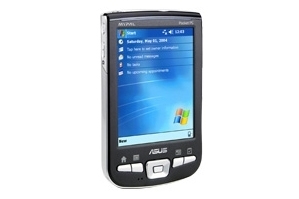 The ASUS MyPal A730 packs a lot of features into an attractive package, but it could make better use of some of them.

The MyPal A730's 3.7" screen is one of the best-looking PDA displays we've seen, with bright, vivid colours and sharp text. It's also one of the few PDA screens with VGA (640 x 480) resolution. The A730 runs Windows Mobile 2003 OS Second Edition, which allows you to rotate the screen into landscape orientation--a definite plus for working on things like spreadsheets.

The A730 has two memory card slots, one for reading CompactFlash cards and the other for reading SD or SDIO cards. It has full-duplex sound capabilities for playing back and recording sound; but it lacks 802.11 wireless networking circuitry. On the other hand, you can use its Bluetooth wireless adapter to connect to the Internet through a cell phone; I found this feature easy to set up and use.

The removable 1100-milliampere-hour battery provides an adequate battery life of around three hours in general use--significantly less than many Palm OS devices, but probably enough for a day's work. You can buy spare batteries for extended days and longer trips, though the only way to charge them is in the PDA itself. The included SmartKeeper software will automatically back up the data in the onboard memory to a memory card, thereby preserving the data if the battery runs out completely.

The A730 also has a built-in camera capable of taking photos (at a maximum resolution of 1280 x 970) and short videos. ASUS refers to an included light as a flash, but it's really just a white LED that can't illuminate anything beyond a couple of feet. The camera takes adequate pictures, but the images are somewhat blurry (especially in low-light situations) and their quality is on a par with what you'd get from a typical camera phone.

The 520-MHz XScale processor is speedy, but slower than the 620-MHz processor found in high-end iPAQs and in the Dell Axim X30.