ASUS N55SF review: A good looking and powerful laptop that also has a focus on audio quality thanks to Bang & Olufsen The ASUS N55SF is a powerful notebook with a good looking design and solid build quality. We really enjoyed using it during our test period and think it's a suitable unit for anyone who wants laptop that can be used for gaming and other demanding tasks as well as everyday work. That said, it's not perfect: it could use some more features as well as a less glossy screen.

With impressive looks and specifications, as well as above average speaker performance, the ASUS N55SF is a great all-round laptop. It can be relied upon for just about any computing task you can think of — including gaming — and it also feels very comfortable to use.

A matte palm rest and grey keyboard provide a nice contrast to the glossy finish of the screen and give the N55SF an elegant overall look. The palm rest is large, as is the touchpad, and there is a large area above the keyboard reserved for the speakers. The power button and all the multimedia and audio shortcuts are located on the keyboard itself and this is a design that we quickly got used to and liked very much. It also makes the laptop look much cleaner without the power button and associated status LEDs taking up space above the keyboard.

It's a comfortable laptop to type on as the keys are large and offer good travel and response. There is a number pad as well, but it's a little squished and takes some getting used to. The touchpad is 105x60mm, very smooth and supports multi-finger gestures. It was responsive and accurate in our tests but we don't like its buttons. Both the left- and right-click buttons are under a single moulding and this makes them difficult to distinguish by feel. Furthermore, they are a little too hard to press.

The speakers above the keyboard aren't the only ones to ship with this laptop; it also comes with a little sub-woofer that plugs in to a dedicated port on the right side. It boosts the low frequency response enough to make listening to music a very enjoyable experience — as far as laptops are concerned, the sound is well above the average. However, you still get distortion when you listen at, or near, the maximum volume. You can adjust the level of the bass by using the SonicMaster software. It's located in the Multimedia section of the AsusTools folder that's on the desktop; we wish it was more easily accessible. 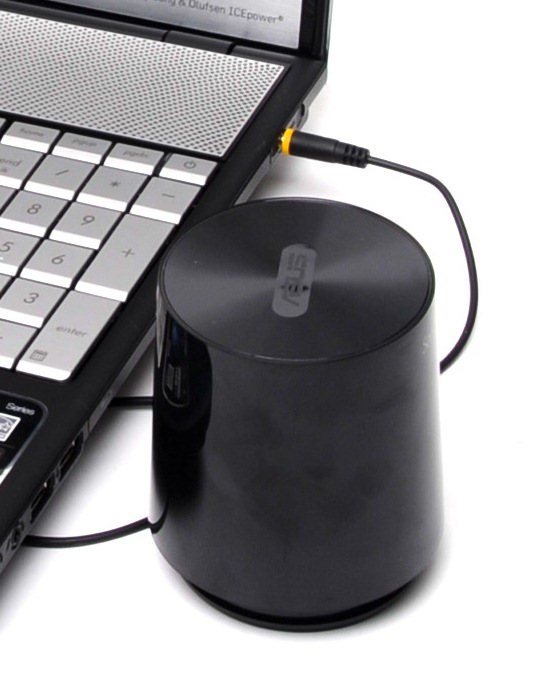 The ASUS N55SF packs an extra audio punch thanks to the inclusion of an external sub-woofer. 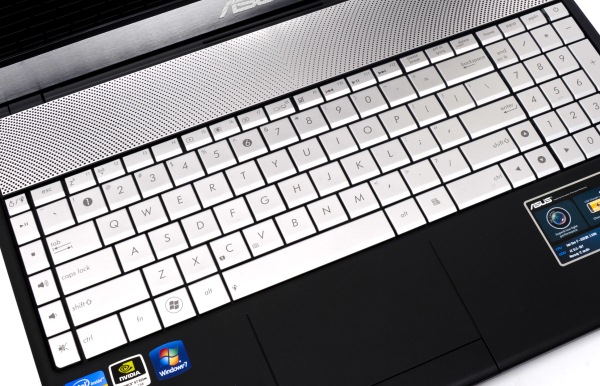 We love the way the keyboard looks and feels, and also the fact that the power button and shortcut buttons are located within its space.

Around the edges of the N55SF you'll find a Blu-ray combo drive (it reads Blu-ray discs and writes to DVDs), four USB ports (two of which do USB 3.0), headphone and microphone ports, Gigabit Ethernet, HDMI, VGA and an SD card slot. It also has a high-def webcam, Bluetooth 3.0 and 802.11n (2.4GHz) Wi-Fi. The left side also has a big vent through which all of the warm air that's generated by the components can escape. The laptop does get warm when it's running under load, which is understandable given its configuration, but as it weighs 2.8kg, it's not a laptop you'll want to use on your lap for long periods of time anyway.

The laptop is run by an Intel Core i7-2630QM CPU that has four cores as well as Hyper-Threading and a standard frequency of 2GHz. There is 8GB of DDR3 SDRAM, a 5400rpm, 750GB hard drive and an NVIDIA GeForce GT 555M graphics adapter (as well as Optimus technology that can automatically switch to the integrated Intel HD graphics). This configuration supplies lots of grunt that can be applied to games and video and imaging applications, and it's perfect for multitasking and being productive. We would have liked a 7200rpm hard drive instead of a 5400rpm drive, but there are other models in the range that have faster drives.

In our Blender 3D and iTunes MP3 encoding tests, the ASUS put up a strong showing, recording 24sec and 51sec in these benchmarks, respectively. These results are on par with what we have seen from other notebooks with the same CPU and graphics, such as the Acer Aspire Ethos 8951G. In 3DMark06, the ASUS managed to get a better score than the Acer notebook: 12722 for the ASUS and 9965 for the Acer. In first-person shooters such as Left 4 Dead 2, the ASUS clocked 60 frames per second at the native resolution of the screen (1366x768). However, the ASUS was 2min slower in the DVD-to-Xvid conversion test, recording 47min compared to the Acer's 45min. The difference there is most likely due to the Acer's use of a solid state drive.

In our battery rundown test, in which we disable power management, enable Wi-Fi, maximise screen brightness and loop an Xvid-encoded video, the ASUS lasted only 2hr 14min. It's not a good time, even for a 15in model of this calibre and it barely beats ASUS' own Lamborghini VX7, which recorded 2hr 9min in the same test. That said, it's not a laptop that you're likely to use while actually on the road; you'll probably only whip it out when you're indoors and near a power point anyway.

Overall, the ASUS N55SF is a very good 15in laptop and one we'd be happy to own. It feels good to use, is well made, looks elegant, has above-average speakers and sound quality, and it boasts enough power under the hood to be a more-than-decent gaming machine. It's not perfect though: the lack of an eSATA port, the lack of a backlit keyboard, an overly glossy screen, lots of pre-installed software, lack of dual-band Wi-Fi and hard touchpad buttons are some of the things potential buyers need to be aware of.