The ASUS Padfone, an Android phone that docks into a tablet shell, is one of the most interesting mobility products we've ever seen. Unfortunately using the Padfone on a daily basis simply feels like an unfinished product in desperate need of both a hardware revision and multiple software upgrades. If you want a smartphone, buy a smartphone and if you want a tablet, buy a tablet. We can't recommend buying the Padfone.

At least you can never accuse ASUS of being boring. In a market filled with "me too" products that lack imagination, the ASUS Padfone, an Android phone that docks into a tablet shell, is one of the most interesting concepts we've ever seen. Disappointingly, the Padfone is too clunky and the modular idea feels more like a concept rather than a finished product.

The ASUS Padfone, as its name suggests, is a smartphone first and foremost. Its design keeps some consistency with most of ASUS' recent product releases, particularly the well-designed Transformer Prime Android tablet. Like this tablet, the Padfone has sharp metallic edges, a gloss black bezel surrounding the display and an etched, swirl pattern on the back that provides adequate grip. The look and feel is very industrial and the phone feels well constructed.

The Padfone's sharp edges can uncomfortably dig into your hands.

The Padfone has a 4.3in touchscreen so its dimensions are a little smaller than current flagship models on the market, like Samsung's 4.8in Galaxy S III and HTC's 4.7in One X/One XL. If you're put off by the extra large size of these smartphones, the Padfone is a nice balance between display size and sheer footprint. However, we found that the sharp edges, particularly where the aluminum frame meets the bezel surrounding the front glass, can uncomfortably dig into your hands.

Edges aside, the design of the ASUS Padfone is well implemented. The power/lock screen buttons are well positioned and can easily be accessed with one handed use. On the left side is a micro-USB port for charging and a micro-HDMI port for connection to a TV — both of these ports are used when you dock the Padfone into the Padfone Station. The phone is powered by a dual-core 1.5GHz processor, has 1GB of RAM and 32GB of internal storage. A microSD card slot behind the rear battery cover allows memory expansion.

The Padfone's sharp edges can uncomfortably dig into your hands.

The PadFone's 4.3in screen is a Super AMOLED panel with a qHD resolution of 960x540. It offers excellent viewing angles, the vivid colour we've come to know and love on AMOLED screens and is responsive to use. However, the qHD resolution means it can't quite match many flagship rivals when displaying text. It's not a huge issue, but you'll notice visible aberrations on the edges of text when you compare the Padfone's display with higher resolution smartphone screens. 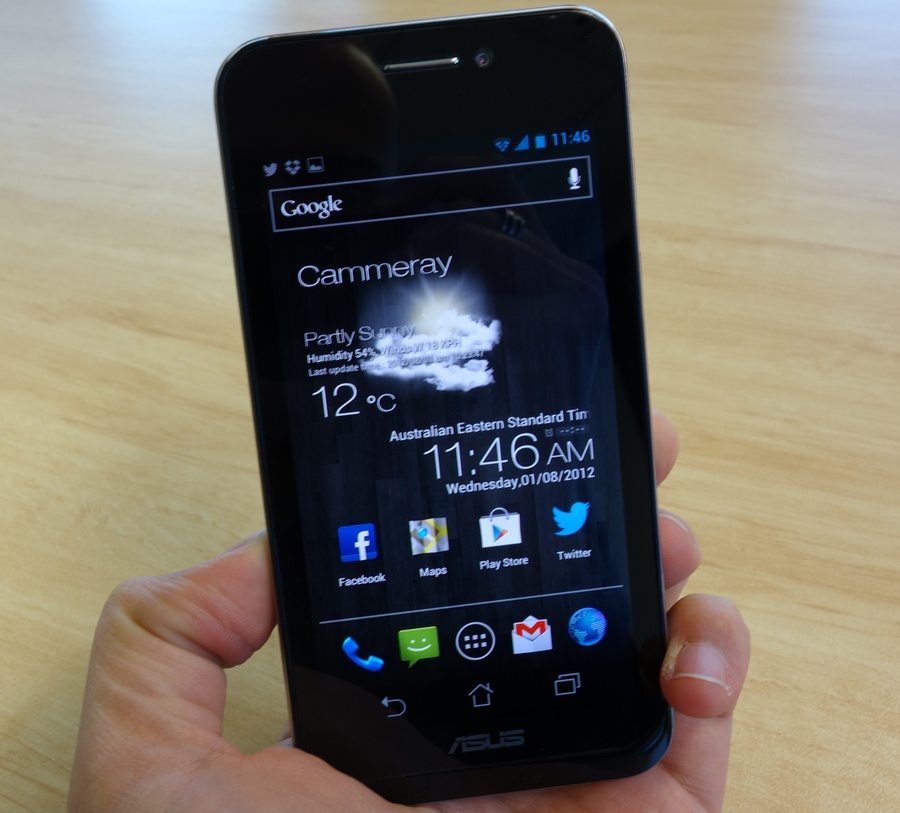 The Padfone's qHD resolution means it can't quite match many flagship rivals when displaying text.

The idea behind the ASUS Padfone is a modular concept. When the phone is placed inside the PadFone Station, the PadFone effectively turns into a full 10.1in Android tablet. The PadFone Station is just a screen, so all the processing power, memory and connectivity comes from the PadFone, though the tablet component does have a 6600mAh battery. As the tablet dock utilises the processing power and connectivity of the phone itself, the PadFone negates the need for two separate data connections. Unfortunately, if you're a Telstra customer, you're out of luck: the Padfone only supports the 900 and 2100MHz 3G network bands in Australia and therefore won't operate on Telstra's 850MHz Next G network.

The Padfone won't operate on Telstra's 850MHz Next G network. 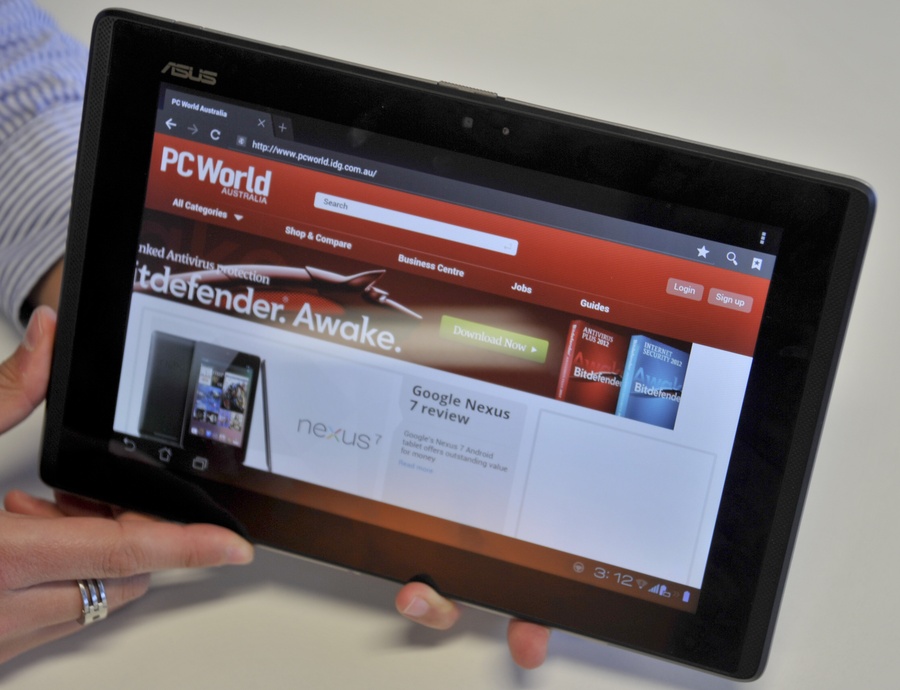 The Padfone Station is heavy, big, bulky and significantly thicker (13.5mm) than most other Android tablets on the market.

Its design is rather appealing, too. The bulging Padfone door latch means the Padfone Station doesn't sit flat on a desk or table and rocks when you touch the screen towards the top and bottom. This poses a significant problem when trying to type on a desk or table using the on-screen keyboard, for example. The Padfone Station also lacks the sleek look and feel of ASUS' other Android tablets, like the Eee Pad Transformer Prime and the Transformer Pad TF300. The ultimate feeling we get when using the Padfone Station is that it still feels like a concept.

The Padfone Station is heavy, big and bulky.

The Padfone Station's 1280x800 screen, while large, can't compete with the higher resolution panels of tablets like the new iPad, the upcoming Acer Iconia Tab A700 and ASUS' own Transformer Pad Infinity. All of these models boast sharper, clearer, and higher resolution displays that will soon become the norm on tablets. In this case, the specifications on the Padfone Station are a little outdated. It's certainly not a bad tablet, by any means, but when you're forking out almost $1000 you should expect a top of the line device. 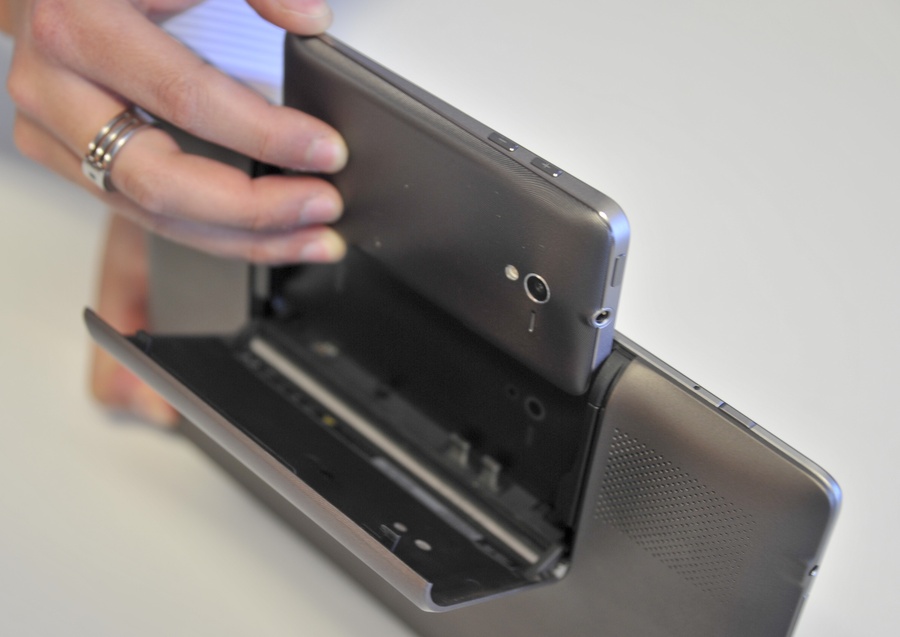 From phone to tablet and back: a work in progress

Docking and undocking the Padfone removes all apps from Android's recent apps list.

The biggest issue is one that plagues all Android tablets — there aren't enough apps that have been designed to suit the larger screen of a tablet. Some of the regular apps we use like Facebook, Twitter and Spotify simply blow up to fit the Padfone Station's larger screen. The latter doesn't even work in landscape mode. These apps look and work better on the Padfone by itself, defeating the purpose of the Padfone concept altogether. 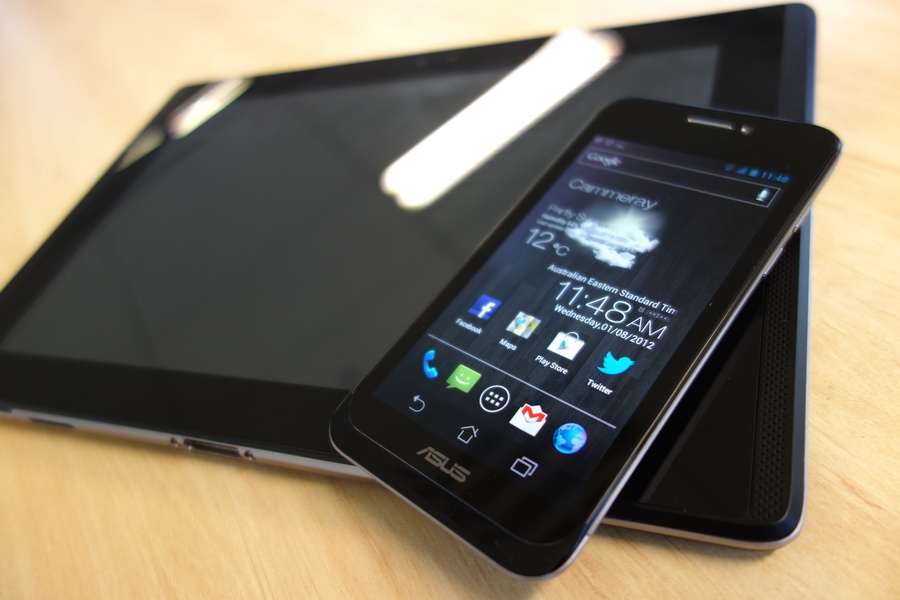 Many Android apps look and work better on the Padfone by itself, defeating the purpose of the Padfone concept altogether.

It gets worse when you switch from phone to tablet mode, or vice versa. ASUS says its Dynamic Display technology automatically resizes apps when you dock the Padfone into the Padfone Station, or remove it. The problem is, it works in some apps but not in others. If you're typing an e-mail in Gmail with the Padfone docked, for example, removing it kills the app and you lose your work. The same applies to the Play Store, Google Maps and YouTube. To be fair many third party apps like Twitter, Facebook, Chrome and Dropbox support the feature and work reasonably well, but the fact that default apps like Gmail do not is a huge downside.

Even worse still is the fact that docking and undocking the Padfone removes all apps from Android's recent apps list. This is a huge annoyance and a big oversight. ASUS clearly hasn't found an efficient way to combine both smartphone and tablet modes seamlessly, a critical issue and one that almost defeats the purpose of the Padfone concept entirely. 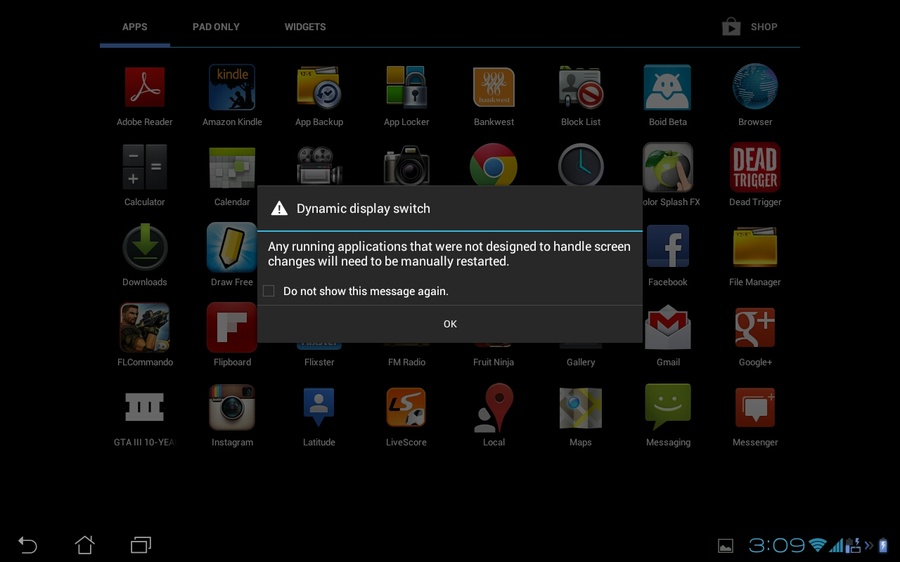 These issues are obviously bugs that need to be ironed out and will most likely be fixed with future software updates but they contribute to the overall feeling of the Padfone — a great idea let down by poor execution and a very inconsistent and unfinished user experience.

The ASUS Padfone software is largely a 'vanilla' version of Google's Android OS, though ASUS includes a number of extra apps. Additions include a file manager, a MyCloud storage app with 32GB of free storage for three years, a MyLibrary books app, and a MyNet app for streaming multimedia content via DLNA. The MyCloud app offers one year of unlimited cloud storage and works similarly to the popular Dropbox service. ASUS also includes handy e-mail, clock and weather widgets, along with a special Padfone Station Utility widget that displays two separate percentages for the Padfone and the Padfone Station. 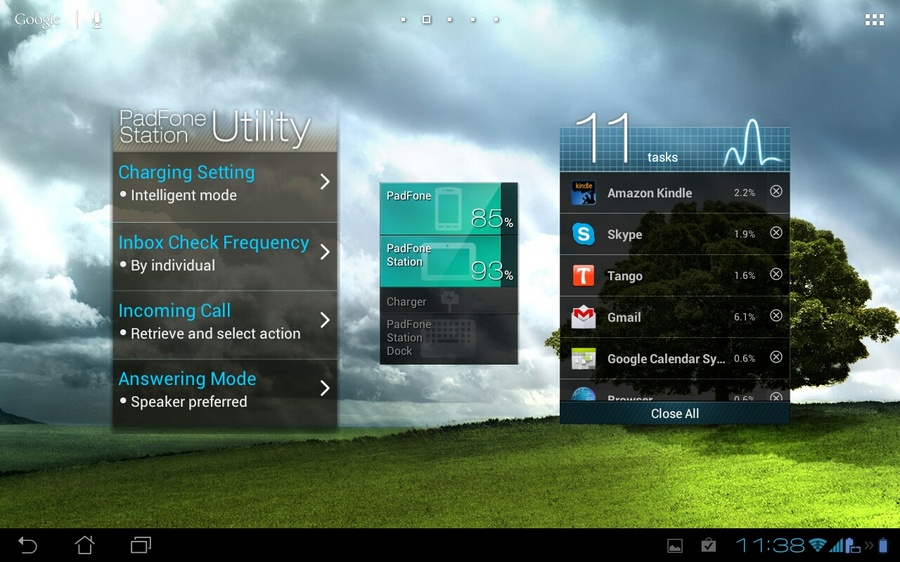 Using the Padfone isn't all bad news. Its 8-megapixel camera is decent, capturing images with plenty of detail and producing good colour. Image noise is really prevalent, though, and some of our photos were washed out. We also found autofocus a little erratic. The Padfone's camera can be best described as OK — it's not the best camera we've seen on a smartphone, but its not the worst we've seen, either.

Because the Padfone Station uses the Padfone's camera, thanks to a hole in the Station's case, its camera is actually one of the better ones we've used on a tablet device. However, the front camera is of poor quality, even purely for video calling apps like Skype and Tango, and the full HD 1080p video recorder is also poor. 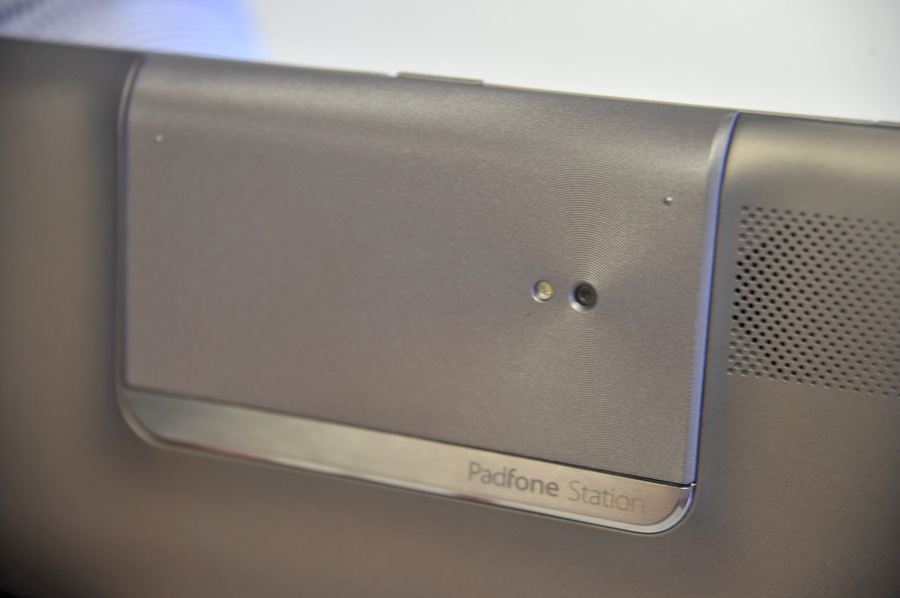 The Padfone Station uses the Padfone's camera, thanks to a hole in the Station's case.

For multimedia playback and hands-free phone calls, the Padfone Station's speaker rear speaker is one of the loudest we've used on an Android tablet. However, music notably distorts at high volume levels.

In Australia, the ASUS Padfone comes with the PadFone Stylus Headset. This capacitive stylus doubles as a Bluetooth headset, with an answer button, a speaker and a microphone. Holding a stylus to your head and talking into it is plain awkward, but the option is available should you desperately need to answer your docked PadFone, so it's a nice inclusion. The "smart sleeve" case included in the sales package is also a nice touch.

Unfortunately, ASUS won't sell the Padfone's one other optional accessory, the keyboard dock, in Australia. Australian users who want to add a physical keyboard dock to the Padfone will need to purchase the company's original Eee Pad Transformer (TF101) keyboard dock for $199. It will enable typing, but its built-in battery isn't compatible with the Padfone and therefore won't extend the battery life of the device. 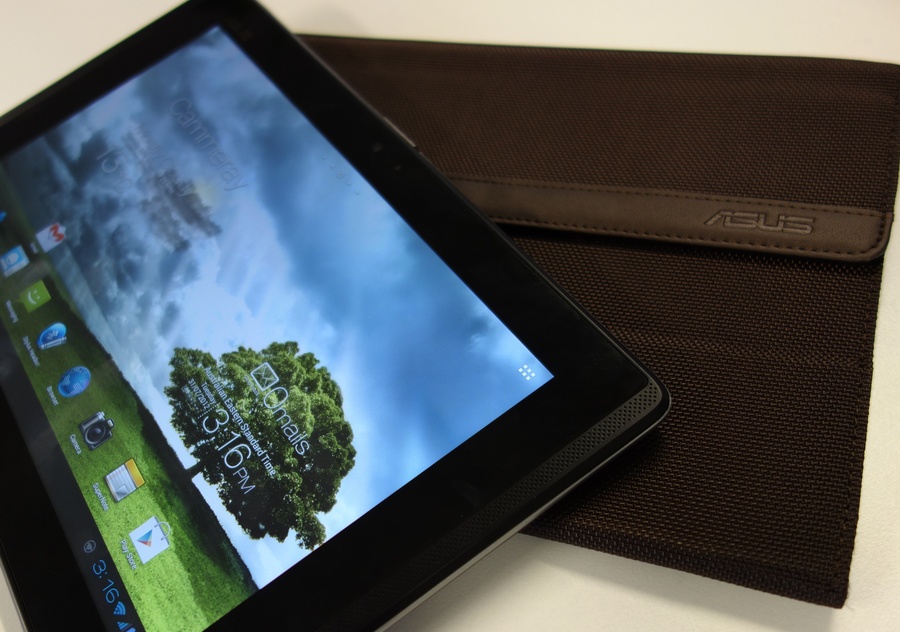 The "smart sleeve" case included in the sales package is a nice touch. 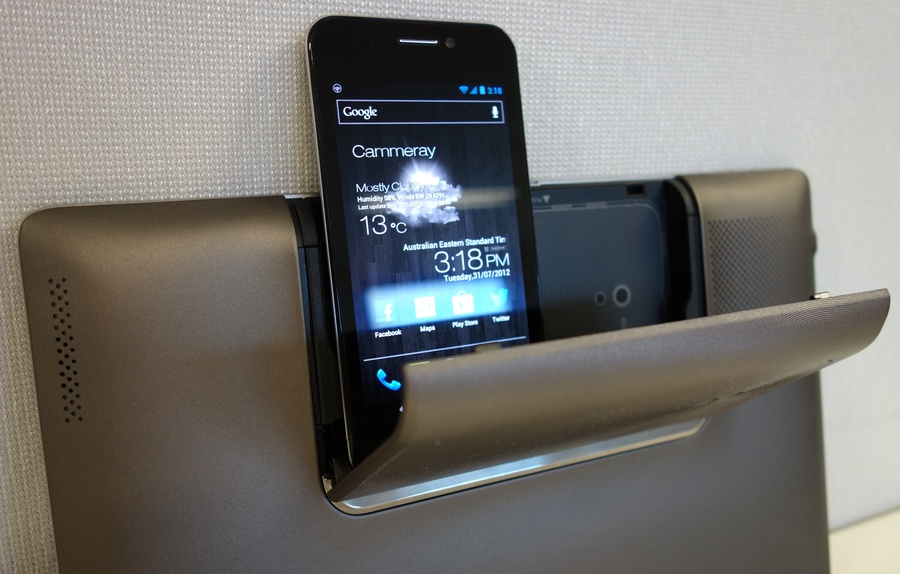