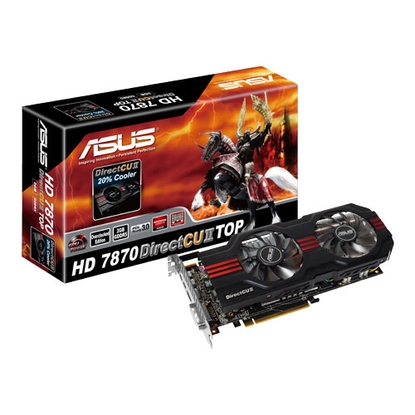 The ASUS Radeon HD 7870 is a factory-overclocked mid-range card that has good performance figures. If you can find it cheap it'll run modern games comfortable on a medium-sized monitor.

AMD's Radeon HD 7870 graphics card is a mid-range model, sitting above the 7700 series and below the high-end 7900 series. AMD's 'Pitcairn' GPU is a solid mid-range performer without the price tag of more powerful units. This ASUS Radeon HD 7870 TOP DirectCU II model has better cooling and more power than a standard design, making it a good value choice.

Mid-range graphics cards generally hit a good compromise between power and pricing — they're not nearly as expensive as outlandish, top-of-the-line dual GPU or single GPU powerhouses like the AMD Radeon HD 7970 or upcoming 7990. Despite a more accessible price tag — one of these would be at home in a custom-built PC with a price tag under $1500 — the 7870 doesn't sacrifice a great deal of performance.

The Radeon HD 7870 is always going to be compared to the HD 7970, and for good reason. The 7870 uses the latest 28nm GPU manufacturing process, so it's as efficient and modern as any other graphics card available. It's quite similar in its specifications to a 7970, although it only has 2GB of GDDR5 RAM versus the 7970's 3GB.

The ASUS TOP branding denotes a card that has extra power over a standard model; this ASUS Radeon HD 7870 TOP DirectCU II's GPU comes in at 1100MHz versus the reference design's 1000Mhz, a 10 per cent speed bump that should see a comparable lift in benchmark performance. RAM speed is boosted from 1200MHz to 1250MHz.

The ASUS Radeon HD 7870 TOP is outclassed by both the GTX 670 and the Radeon HD 7970. Both these cards are closely matched, with the GTX 670 giving the better performance per dollar. the 7870's performance is still strong considering its mid-range classification, though — and you don't need a high-end card to run modern games at impressively detailed settings.

The 7870 maintains playable performance in almost all resolutions, with the maxed-out Crysis 2 dipping into choppy territory at 2560x1600: the domain of 27in or larger LCD monitors. If you're using the Radeon HD 7870 on a smaller monitor, it will perform acceptably with modern games.

The HD 7870 proves that mid-range cards are more than capable of handling modern games acceptably, despite inferior specifications to high-end models. It's also much cheaper. ASUS's TOP models are only slightly more expensive than standard but have a 10 per cent overclock to raise performance — good value if you can find competitive prices.