ASUS RT-N56U review: One of the best looking dual-band wireless routers you will ever see In addition to having a dual-band wireless access point, the ASUS RT-N56U runs a Gigabit Ethernet switch that makes wired file transfers very quick, and it also has a UPnP server and two USB 2.0 ports. You can plug in external hard drives filled with movies or music and access them through your PS3 or another streaming device. You can also use one of the USB ports to share a printer over the network.

When you plug in a hard drive, you can access it from any computer on your network by simply browsing your network for shared folders. You can also enable FTP so that you can access files from your external hard drives over the Internet; you can set up a dynamic DNS (DDNS) service through the mini-wizard (called AiDisk Wizard) when you enable FTP access. It's not very intuitive though, and you're better off entering dynamic DNS settings manually and then going through the AiDisk setting to enable the FTP service. You can control access to connected disks by adding users and modifying their rights. Annoyingly, the default for every folder when you add new users is 'read and write' permission, rather than 'read only' permission.

You can access your connected hard drives remotely via FTP if you've set up a dynamic DNS connection.

The Web interface of the RT-N56U aims to be as pretty as the router itself. It's a lot more graphical than a typical Web interface and has a network map (showing you all the devices that are attached) as well as plenty of icons; it takes a while to get used to this layout. It wasn't as reliable as we hoped; often when we changed a setting we had to reload the page and change the setting again before it would take effect. This was particularly the case when changing the access rights of attached hard drives. Most changes make the router restart, and this takes an annoying minute to complete.

Security is handled by a built-in firewall and there is also a facility for keyword URL filtering. When a flagged keyword appears in a URL, the site will be blocked but the user won't get a conspicuous message telling them this (unlike the Netgear DGN1000, for example, which shows a nice big warning); instead the Web browser will just report a connection error. You can still access pages that contain flagged keywords in their body but not in their URL, so it's not a complete solution for parents who want to block their kids from searching for information about certain topics. 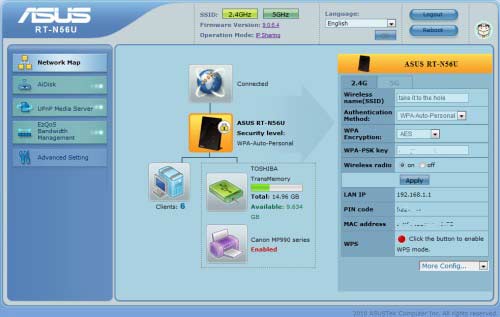 The Web interface on the ASUS RT-N56U is a lot more graphical than competing routers and takes some getting used to.

A unique design ensures that the ASUS RT-N56U will at least be a talking point when people come over and ask you what on Earth that funny-looking contraption is doing on your desk. In addition to being a far-from-boring router, the RT-N56U is also quite a fast and well-featured one. We're impressed with its 2.4GHz speed, and love the fact that it can run 2.4GHz and 5GHz networks simultaneously. We also love its Gigabit Ethernet switch and its USB 2.0 ports for sharing storage devices and printers.

Overall, it's a very good little router that should serve enthusiasts well. We just wish it had a quicker and better designed Web interface. We also found its wall wart (which requires you to slide the prongs into the adapter) to be a little too flimsy and it could lose power if we moved it accidentally.