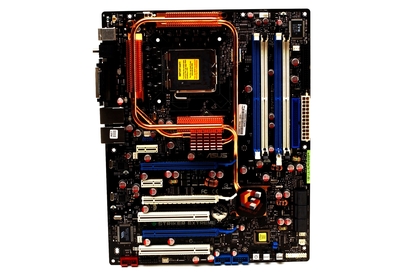 The ASUS Striker Extreme is a good board to consider if you're an enthusiast. It provides plenty of speed and has comprehensive overclocking features.

The first motherboard in ASUS' Republic of Gamers series was the Crosshair, which was built for AMD users. At the time, ASUS claimed that gamers preferred AMD CPUs over Intel. As Intel's Core 2 Duo has proven to be a superior performer to AMD's current crop of CPUs, this scenario is likely to change. Therefore, ASUS has released a Republic of Gamers board that is ripe for Intel users: Striker Extreme.

The Striker Extreme is based on NVIDIA's new nForce 680i chipset, which supports SLI, all the Core 2 Duo models currently on the market, including the quad-core QX6700, and a 1333MHz front side bus speed. This means it will be able to handle Intel's next major CPU releases.

The board also supports up to 8GB of memory though its four DDR2 memory slots and has six Serial ATA (SATA) ports and two external SATA ports (eSATA). As is the case with most new motherboards, it has only one IDE port. The Striker Extreme has plenty of USB 2.0 (10 ports) and FireWire (two ports) connectivity as well as 8-channel digital audio and two Ethernet ports.

Using this configuration the board produced results that are faster than boards we've previously seen based on Intel's P965 chipset. In World Bench 5, for example, the Striker Extreme's overall score of 140 is better than the score Gigabyte's GA-965P-DQ6 could achieve (137). This is a lightning fast result for a board running an E6700 CPU and the individual application breakdown showed good results in the Adobe Photoshop photo editing, WinZip 8.1 file compression and Windows Media Encoder file encoding tests. We also ran Cdex to convert 53min worth of wave files to MP3 files: the Striker Extreme completed this task in 1min 29secs, which is a fantastic result.

One of the key selling points of the Striker Extreme is its overclocking ability. You can overclock the board through the BIOS either by using the pre-defined overclocking levels (5, 10, 15 or 20 percent) or by adjusting all the settings manually. The BIOS lets you tweak the memory, CPU and PCI Express frequencies and voltages, as well as the memory timings.

The Striker Extreme combined well with an E6700 CPU in our tests and provided stable results when overclocked up to 15 percent. When we overclocked the system by 20 percent it would not boot up, which is where its innovative features came into play.

The board has illuminated onboard buttons for resetting the BIOS' default values, which is super-handy when the board hangs due to overclocking. It means you don't have to fiddle around with jumper settings. Additionally, it has illuminated buttons for powering on and for resetting the system. All of these buttons are located on the bottom edge of the board near the front panel connection pins and are handy for when you are performing upgrades or maintenance on your system and when you don't have the front panel buttons from your case attached.

A button on the rear port cluster of the motherboard also lets you turn on blue diodes that are located next to key components on the motherboard. The purpose of these lights is that they easily locate components when performing upgrades in the dark.

The physical layout of the board is neat and well-spread out. We didn't have any problems installing any components and we particularly love the arrangement of the SATA ports, which are all clustered together and face towards the front of the case. The dual PCI Express x16 graphics slots for an SLI configuration are well spaced, which allow cards with thick coolers to be installed without any problems.

ASUS cools the motherboard chipsets and the transistors around the CPU area with heat sinks and a heat pipe. A small fan is supplied in the box if you think your chipset could use a little more cooling.

Be prepared to fork out a lot of money for this board. It's definitely not one to consider if you just want something simple for an everyday computer. If you want to have all the latest features and plenty of flexibility for overclocking and you're an enthusiast with deep pockets, this board is for you.