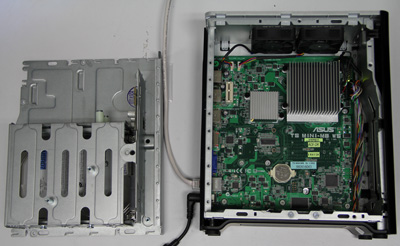 The TS mini Home Server has space for a second hard drive, but it's difficult to get to.

The ASUS TS mini Home Server is quite boxy and not very attractive, but it's small enough to fit into a few nooks and crannies. Unlike most NAS devices, this is an enclosed server and doesn't have any drive bays. It does, however, have two internal drive slots, allowing tech savvy users to pry open the case to install a second 3.5in hard drive. You won't be able to remove the primary volume; however as this holds the NAS device's operating system.

ASUS' NAS device lacks any connectivity or buttons on the front. There's a power button on top, and all connectivity is relegated to the back of the unit, including the six USB 2.0 ports, two eSATA ports and a single Gigabit Ethernet port. You can plug any NTFS-formatted external hard drive into the NAS device and either add to the total storage pool using Windows Home Server's Drive Extender, or backup, synchronise and manage/delete files using ASUS' Xtor Manager add-in.

Like the QNAP TS-210 Turbo, ASUS' TS mini Home Server is powered by an Intel Atom processor clocked at 1.66GHz. It also packs 1GB of DDR2 memory, which is certainly enough to maintain and serve the 1TB storage capacity between several users.

The TS mini Home Server runs the Windows Home Server operating system which, as we found with HP's EX490 MediaSmart Server, can have both its advantages and disadvantages. For instance, you'll have to maintain and administer the NAS device through a remote console rather than a Web-based interface, which in our tests can make for slow and painful configuration experience.

Windows Home Server's benefits largely lie in its simplicity and ease of use. Rather than mucking around with RAID configurations and volume letters, users can simply include any additional internal and external hard drives into the NAS device's storage pool. The aforementioned Drive Extender feature is handy for expanding storage, and it even takes redundancy into account, although it does limit the storage volume's overall performance.

Enabling media features like the TwonkyMedia-powered UPnP server and Windows Media Centre integration are also quite easy and in the case of the latter, it simply demands some additional software. The console's interface also makes it easy to configure monitored media folders as well as the TwonkyMedia server, without accessing the rather unkempt Web ser interface.

The ASUS' TS mini Home Server is tightly integrated with Windows XP, Vista and 7, allowing you to automatically setup and configure backups on any computer installed with the Windows Home Server Connector. HP's NAS device added reasonable support for Macs too, with a similarly capable remote console and Time Machine backups, but ASUS' offering shows no sign of either Linux or Mac support. 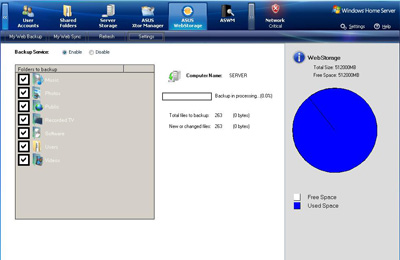 ASUS adds to the Windows Home Server OS through enhanced external and Web-based storage. The Xtor Manager add-in allows you to see individual external drives, with the ability to backup or synchronise internal storage with the hard drives. The ASUS WebStorage add-in provides access to the same online storage platform found on many of the company's Eee PC netbooks. It's a particularly impressive addition, giving users 500GB of storage for backups and synchronisation.

We tested the 1TB configuration of ASUS' TS mini Home Server, connected through a Gigabit Ethernet network to a testbed PC with a 300GB Western Digital Velociraptor hard drive. We run Intel's NAS Performance Toolkit, which determines how the NAS device performs when streaming 720p high-definition media from the device as well as the ability to record the same video while performing backup operations.

We also run two file transfer tests to see how the NAS device performs in real world scenarios. One file transfer test uses 3000 1MB files; this is intensive for both the hard drives and the embedded processor, and it provides a good indication of how the device will perform when backing up your computer. In addition, we transfer 20GB worth of 3-4GB files, a faster test that is similar to dealing with large videos, disk images or database files.

Though technically inhibited by low-powered components and a redundancy-based RAID configuration, the ASUS TS mini Home Server performed better in Intel's synthetic benchmark and large file benchmarks than most other one and two-bay NAS devices we’ve tested. It even fares better than HP's four-bay EX490 MediaSmart Server, which uses a Celeron processor, making the ASUS TS mini Home Server an apt choice for streaming media or handling image files across a Gigabit network.

However, when it comes to small files and folders the ASUS NAS device doesn't fare so well. Dismal results across all small file benchmarks — particularly simultaneous file transfers — shows that the NAS device doesn’t offer the fastest performance for manually backing up personal files.

The ASUS TS mini Home Server's performance shows that not all Windows-based NAS devices are slow. The impressive online storage platform and external hard drive manager also make it a better choice than similarly capable alternatives, although the lack of Mac and Linux support is a little disappointing.