A light ASUS notebook with plenty of battery life 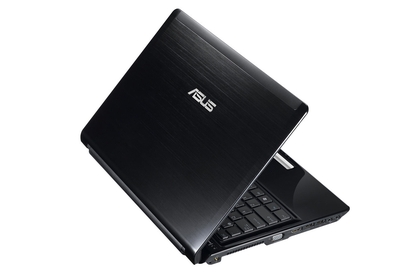 If a reasonably thin and light notebook with excellent battery life sounds like your cup of tea, then the ASUS UL80Vt is for you. At 14in it's easy to use, yet not a burden to carry around. It's well built, looks good and performs well, but it does lack some connectivity options such as eSATA.

ASUS' UL80Vt is a 14in notebook that's built for people who want plenty of features and good speed, yet want a laptop that's reasonably light and capable of lasting a long time away from a power outlet. It weighs approximately 2kg and ships with an 8-cell battery, and it comes with a stack of ASUS utilities that allow you to tweak its performance, power profiles and start-up speed.

The ASUS UL80Vt notebook has 4GB of DDR3 SDRAM, runs Windows 7 Home Premium and is based on an Intel Core 2 Duo SU7300 CPU. This dual-core CPU has a clock speed of 1.3GHz; although this is low, it helps conserve power and reduce heat. This speed is more than adequate for running office and image editing applications — as the score of 72 in our WorldBench 6 benchmark demonstrated.

In the Blender 3D and iTunes MP3 encoding tests, it recorded times of 1min 42sec and 1min 44sec, respectively. This indicates that it's capable of completing media encoding and rendering tasks within a reasonable time frame. It won't be as fast as a larger laptop with a 2GHz+ Core 2 Duo CPU (such as the 15.6in MSI GX260, for example), but for a relatively small laptop that's designed to remain cool, it's a decent showing. The notebook's hard drive performance was impressive: the 320GB drive recorded an average rate of 27.89 megabytes per second in our transfer tests, which is practically desktop PC-like performance.

There are two graphics cards in the UL80Vt: an integrated Intel GMA 4500MHD adapter and an NVIDIA GeForce 210M. You can switch between them by pressing a button just above the keyboard. The dual adapters let you enjoy faster graphics performance while plugged in to a power outlet (by using the NVIDIA adapter), and increased battery life while on the road (by using the Intel adapter). Pressing the button can also invoke an auto-detect mode that will use the NVIDIA graphics adapter only when you launch a 3D application. However, it didn't switch back to the Intel graphics adapter after exiting a 3D application during our tests.

The ASUS Power4Gear power management utility also affects which graphics adapter is used: when you are in high-performance mode, the NVIDIA adapter will be used, while in battery-saving mode the notebook will employ the Intel adapter. Annoyingly every time we enabled the power-saving profile it would auto-hide the taskbar, so we had to change this setting every time.

In 3DMark06 the NVIDIA adapter recorded 3580, which means it won't be fast enough to run many of the latest graphics-intensive games. The point of this graphics adapter is not to run the latest and greatest games on the market in all their glory; it's designed to cater to some low-detail-level gaming, as well as unburden the CPU and RAM from graphics processing tasks and therefore improve the overall performance of the system.

The ASUS UL80Vt ships with an 8-cell battery that resides on the laptop's spine. Unfortunately, we had some trouble getting it to charge completely during our tests. It would always stop charging after reaching 82 per cent, according to Windows 7. We tried different power schemes, disabling power schemes, rebooting, draining and recharging, and reseating the battery — all to no avail. We chalk it down to a quirk with our sample unit.

Nevertheless, even with a reported 82 per cent charge, the battery life of the UL80Vt is impressive. Using the NVIDIA graphics adapter, no power management, with maximum screen brightness and with the wireless radio enabled, it looped an Xvid-encoded video for 3hr 21min. We then switched to the Power4gear Battery Saving mode and ran the same video test. In this mode the laptop uses the integrated Intel graphics, medium screen brightness and changes the colour depth from 32-bit to 16-bit. The wireless radio is left enabled. It lasted 5hr 1min in this test, which is a phenomenal result. The only problem is that you have to put up with lot of colour banding due to the reduced colour depth. Using this mode for writing documents and other office-related work is fine.

The UL80Vt is 2.5cm thick with the lid closed and, at 2kg, it isn’t very heavy. It includes a DVD burner, has three USB 2.0 ports, HDMI and D-Sub (VGA) ports, as well as Gigabit Ethernet, an 802.11n WiFi adapter, an SD card reader and headphone and microphone jacks. It’s missing an ExpressCard expansion slot.

It has a brushed aluminium lid and a plastic palm rest. ASUS calls it the Ice Cool Palm Rest — and we can confirm that it definitely didn't get warm at all after many hours of use. Only some slight warmth was felt just above the palm rest where the keyboard starts. Even the underside of the laptop didn’t get too warm when it was left on a hard, flat surface. There are vent holes on the base, so if you use the laptop on your lap then it will get warmer. There is a large vent on the left side of the notebook, as well as a fan; these work together to extract the warm air generated by the CPU and graphics adapter.

The touchpad sits flush with the palm rest and is distinguished by little bumps. It was accurate for the most part, but there were times when it did not move the cursor or detect a double tap. ASUS has included software that allows you to use gestures on the touchpad. You can use two fingers to scroll vertically and horizontally in windows, for example. This is much more convenient than using the right and bottom edges of the touchpad for scrolling.

The keyboard uses a chiclet design in which all the keys are spaced; this could take some getting used to as you adjust to the space between the flat keys. The keys are full-sized keys and all of them are in their standard position. There is a slight bounce to the keyboard as you type and a slight rattle, but overall it is comfortable to type on.

As is the case with most ASUS laptops, the UL80Vt comes with a plethora of utilities that allow you to easily tweak its performance. We’ve already mentioned the ASUS Power4Gear power management utility, but there is also Fastboot, which helps you improve the boot time by delaying the start of software and hardware services (but doesn’t let you completely disable them), and ControlDeck, which is a nifty application for changing many settings such as the resolution and also provides quick access to some of the installed utilities. You also get a tool that allows you to burn a recovery DVD, a login manager and data vault. All up, it’s a notebook that’s stacked with features! 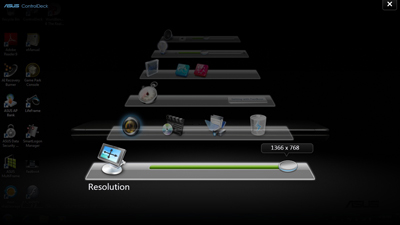 ControlDeck has a cool interface and is most useful as an access point for some of the other ASUS utilities that are installed, such as Fastboot and Power4Gear.

For $1499, the 14in ASUS UL80Vt is a great buy. It’s well built, it has a Core 2 Duo CPU and 4GB of RAM, but most importantly, it’s not too heavy and its battery life is excellent (even with the charging problem we experienced with our test model). Consider it if you want a well-featured laptop for the road that’s bigger, much faster and easier to use than a netbook or low-cost slimline laptop.