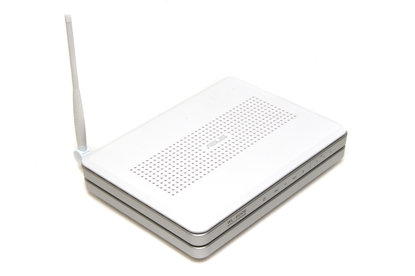 The WL-600g is affordable and it proved to be a reliable modem and wireless access point, but its user interface needs improvement. The built-in FTP server is a nice touch, but didn't let us write to our NTFS-formatted hard drives.

If you're looking for an all-in-one networking device, the ASUS WL-600g isn't a bad choice. It's a solidly built unit with plenty of features, but its user-interface could be a little clearer and its FTP server function is limited.

The WL-600g is essentially an ADSL2+ modem, a router, an 802.11g wireless access point, and a 4-port network switch. It has two USB ports, which can be used to set up an FTP server and a network printer, and bandwidth management is also featured; this allows you to optimise the data throughput for games, VoIP and video streaming, the FTP server and your Web browser.

It Web configuration interface isn't the easiest we've ever used. Only one sub-menu at a time can be expanded, so many items are hidden. Also, its IP filtering and parental control (which can restrict access to the Internet at specified times) will require someone who already knows their way around a router to set them up.

That said, we did like the ADSL auto-detection feature; it was able to detect our connection type in a few minutes so all we had to do was enter our ISP login details. Immediately, the wireless network settings were brought up and we able to enter our network ID and security levels. The security levels present during this step are WEP (64 and 128-bit) and WPA, but if setting up the wireless security manually, the settings are different - it offers a combined WPA and WPA2 mode, and WEP is labeled as 'Open'. Furthermore, three different sub-menus need to be visited in order to set the network ID, the network speed and the type of network security.

We set up an 802.11g network using WPA-PSK security with AES encryption. Testing with a Centrino notebook from five metres away and with a double-brick wall as an obstacle, resulted in a fast transfer speed of 2.43MBps (19.44Mbps). We managed to watch a DivX-encoded movie from our file server without experiencing more than a couple of stutters at the beginning of the stream. Of course, the distance and any radio interference in your own environment will dictate how well the wireless signal works.

The unit's FTP server function allows a powered USB 2.0 hard drive to be shared across a LAN, but it won't allow files to be written to an NTFS-format hard drive, only to hard drive with a FAT file system. We attained a transfer rate of 1MBps when transferring songs from the FTP server wirelessly over our LAN. Computers directly attached to the WL-600g's Ethernet ports averaged 1.42MBps. For setting up a printer, the supplied documentation will come in handy; we followed the instructions and were up and printing in no time (make sure your printer driver is nearby so you can install it).