Gorgeous, small and powerful but with a big Aussie price hike If you're in the market for a powerful ultraportable, this ticks all the boxes. But it's even more expensive for Australians and that hits its value score.

It doesn't take much playing with the Zenbook 3 before you want one. But it's worth inspecting it beneath the surface before parting with your cash - not least because the price in Australia is $400 more than in the US. And you get half as much RAM. Nonetheless...

If you like to travel light, compromise is a way of life. We’ve seen a bounty of ultraportable laptops this year, and everyone of them has had to give at least a little on weight, price, hardware, or build quality.

LG’s Gram 15 had that big screen and insanely low weight, but its keyboard and trackpad were mediocre. The excellent Dell XPS 13 tipped the scales just a bit more than some similar rivals. A slew of Surface clones offered cheaper or flashier alternatives to Microsoft’s 2-in-1, but some features like the OLED screen on Samsung’s TabPro S came with quirks.

Asus’s ZenBook 3, for its part, goes so minimalist that it flirts with being impractical. Unlike its 13.3-inch and 15.6-inch ZenBook siblings, this compact 12.5-inch laptop has just two ports. And it’s not one for data and one for charging—a single USB-C port handles both. The other input is a combo audio jack.

Yes, the ZenBook 3 is essentially a Windows version of the 12-inch MacBook. It’s kind of a shame, too, because the design hamstrings the cutting-edge hardware stuffed inside.

Asus has a few configurations of the ZenBook 3, and they squeeze a lot of high-end parts into a small amount of space. (At 296 x 191 x 12 mm and 910 grams, the ZenBook 3 is just a bit wider and lighter than the MacBook.)

Our $2,699 review unit is the most expensive, with a 15-watt 7th-generation Kaby Lake Core i7-7500U processor as the headliner. Announced back in August, this freshly-launched CPU has a base clock speed of 2.7GHz and a boost clock speed of 3.5GHz, and shows some nice gains in performance over 6th-generation Skylake processors.

That newly launched CPU comes paired with a zippy 512GB Toshiba PCIe-NVMe Gen 3 x4 M.2 SSD and 8GB of LPDDR3/2133 RAM. You can’t find components much faster than these right now: For example, transfer rates of the storage drive sped along at 1.7GBps for sequential high-queue reads and 1.4GBps for sequential high-queue writes in CrystalDiskMark 5.0.2.

The RAM used is also special. Asus told us they worked closely with Intel to enable the 2,133MHz speed with Kaby Lake. The new 7th-gen CPU officially supports only up to 1,866MHz using the power-efficient LPDDR3 — official support for 2,133MHz is only with DDR4.

The system comes with a clear (if slightly washed-out) Gorilla Glass 4 12.5-inch IPS-like display, dual-band 802.11ac Wi-Fi, and Bluetooth 4.1. And of course, those two lone ports.

If you do everything in the cloud, or mostly just surf the web, that single USB-C port might not seem like a big deal. In exchange for the lack of ports, you get a sleek and very portable laptop with looks that rival Apple’s similarly designed MacBook. (The ZenBook 3’s “aerospace-grade” aluminium doesn’t come in solid gold or rose gold, though.) Asus even includes what it calls a Mini Dock—a dongle that expands that lone data and charging port into one USB-C, one USB-A, and one full HDMI.

It’s a problem, though. People who need to plug in more than one data device or connect to a non-HDMI display will feel it most, because the idea of traveling light and unencumbered just flies right out the window. You can’t even get around some of it with an external drive that natively uses USB-C, as the Mini Dock’s USB-C port is charging-only.

So for example, connecting a Nexus 5X and an external storage drive means you have to choose between them, use a USB hub, or buy a dock with more ports. (Asus will specifically offer an optional Universal Dock that offers USB-C, two USB 3.0 Type A ports, full-size HDMI, a VGA port, ethernet, separate audio and microphone jacks, and an SD card reader.) And then you have to carry all the resulting extra cables and/or adapters, too, with the added hassle of carrying and keeping track of everything.

Users who only occasionally use external devices still suffer a bit, too, if they like to use the latest and greatest technology. The ZenBook 3’s USB-C port is USB 3.1 Gen 1—so all data transfers are limited to that 5Gbps maximum transfer rate. You’ll never get to take advantage of the internal SSD’s blazing-fast reads and writes when using a USB drive, even if that drive is equally as fast. Data transfers of a 6GB .mov file and 30GB MKV file between the SSD and a Samsung Extreme 900 averaged in the 300MBps range. 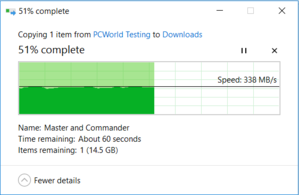 Asus says that due to the motherboard’s chipset limitations, it would’ve had to add an additional controller for 10Gbps speeds, and the motherboard design was already cramped. Still, it’s sad to see a high-end component held in check by a port that moseys along at the same pace as USB 3.0.

Unfortunately for cloud users, the keyboard and the trackpad on the Asus ZenBook 3 can’t be evaded or ignored like the lone USB-C port. The Chiclet keyboard is the worse of the two—I’m usually fairly patient with the inputs on two-pound ultrabooks, but this laptop’s keys are an acquired taste that I still disliked even after growing used to them. They have little travel and don’t give much tactile feedback when they bottom out, and even after adjusting to them I found the whole typing experience deeply unsatisfying. The only positive about the keyboard is that it doesn’t feel mushy—but that’s because the keys are too shallow to allow that kind of sensation. I never thought I’d say it, but I slightly prefer the 12-inch MacBook’s keyboard.

The trackpad is a more pleasant experience, despite sharing the keyboard’s shallowness and lack of firm finish when clicked. It’s highly responsive, allowing you to avoid left clicks because taps are so easily recognized, and has a slick surface that lets your fingers glide smoothly over it. The fingerprint reader enhances the experience by offering ultra-fast recognition of your finger.

As divisive as its outer shell is, the Zenbook 3’s performance is top-notch. (Which makes that USB 3.1 5Gbps port all the more disappointing.) Its components help put the ZenBook 3 among the top ultrabooks we’ve seen—everyday tasks run like butter.

You don’t purchase an ultraportable for gaming or content creation. You buy it so you can write email, edit documents, video chat, and order too much stuff from Amazon. PCMark 8’s Work Conventional test simulates that kind of use, and while any score above 2,000 will be plenty adequate for such work, its result of 3,273 means you should have a slightly snappier experience.

To better examine a scenario where a Kaby Lake Core i7 processor would provide more benefit, we fired up Cinebench R15. This benchmark measures pure CPU performance by rendering a 3D scene, and because it takes only several minutes, it gives a feel for how a laptop will handle short-term intensive tasks.

But what about the MacBook, the ZenBook 3’s most obvious competition? Unfortunately, we didn’t have a Skylake-based MacBook in the office to test, but we can ballpark the current MacBook’s performance by looking at Windows laptop with a similar CPU. The ZenBook 3 stomps all over HP’s Spectre x2: It outdoes the x2’s Core m7-6Y75 by 68.7 percent. Even accounting for the Core m7 MacBook’s slightly faster clock speed, you'll be looking at a big difference between it and a ZenBook 3.

That better performance does come with a cost, though. Asus allows the fans to run on the ZenBook 3, while the MacBook is fanless and silent. You can hear the ZenBook 3 in a quiet room when the system’s under load.

As mentioned earlier, ultrabooks aren’t designed for content creation. We still throw our Handbrake encoding test at them anyway, as a torture test to see how they deal with heavy CPU loads. Some laptops throttle performance as the CPU heats up, while others kick their fans into high gear. Yet others attempt to strike middle ground by doing a little of both.

The more powerful a system is, the faster it converts our 30GB MKV to a smaller MP4 using Handbrake’s Android Tablet preset. Despite its highly compact form, the ZenBook 3 still manages to keep up with systems that are larger and have more cooling—it finished the encode in an hour and 51 minutes. That’s about on par with the Spectre 13.3 and Skylake XPS 13, which both took about an hour and 53 minutes.

The Kaby Lake XPS 13 and its Core i5 processor beat the ZenBook 3 by more than 6 minutes, which just goes to show that cooling can make a difference in performance. While we weren’t able to confirm it because Intel’s XTU software doesn’t work with Kaby Lake just yet, my guess is that the ZenBook 3 slightly lowers its clock speed once the core temperatures rise under extended load, instead of spinning the fans faster (and louder).

The ZenBook 3 sports humble integrated graphics, so don’t expect to play much more than lightweight indie games on it. Still, its HD 620 Graphics show some modest gains over the last-gen HD 520. In 3DMark’s Sky Diver benchmark, a synthetic graphics test that simulates DX11 gaming at 1080p on Medium settings, the ZenBook 3 scored 3,912.

But against the Spectre x2 (a.k.a. our proxy MacBook), ZenBook 3 clearly comes out ahead by a hefty 41 percent. The Spectre x2’s HD 515 Graphics aren’t so much the problem as that lower-power chip and fanless design. It would have been unsporting to mention that when discussing the Handbrake benchmark, since none of these ultraportable laptops are designed with content creation in mind—but some people do like to play games on their laptops, even if they’re not blockbuster AAA titles. Asus should get credit for putting in the extra power into this compact laptop, as it expands what you can do with the ZenBook 3 in comparison to a MacBook.

Next: Battery Life and Final Thoughts