In P3 you're cast as a new transfer student at a Japanese private high school, tasked with making friendships, struggling through classes, and dealing with teenage drama 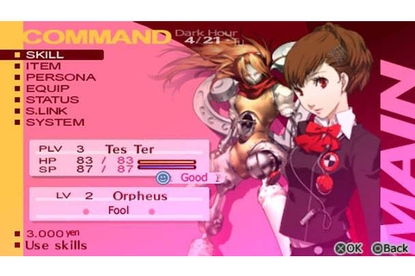 A stellar rendition of an already superb JRPG, Persona 3 Portable expertly captures the essence of it's PlayStation 2-based predecessors, and thanks to the inclusion of a new protagonist option, a bevy of new features and streamlined exploration, may serve as the definitive edition of the game.

When Persona 3 first hit in late 2007, the game was roundly praised as one of the best Japanese RPGs to come out in years and celebrated as a top title in the twilight days of the PS2. The praise was well earned: P3's unique blend of "social interaction sim" and hardcore dungeon-crawling RPG was an inspired take on a stalwart genre. Fan reaction to the game was so enthusiastic -- both in its native Japan and over here -- that P3 was re-released a little over half a year later as Persona 3 FES with additional content and gameplay options. Flash forward to 2010, where P3 is seeing an unprecedented third release in as many years with Persona 3 Portable on the PSP. Is this too much P3 in too short a time? Not at all -- not only does P3P feel as refreshing as it did the first time around, but it offers plenty of new content to make it the best version to date.

The concept behind P3 is such: you're cast as a new transfer student at a Japanese private high school, tasked with making friendships, struggling through classes, and dealing with teenage drama. Through a series of events, you find yourself in the Special Extracurricular Execution Squad, a team of students who have the abilities to summon powerful representations of their inner psyche called "Persona." SEES must destroy the mysterious beings called "shadows" that prowl at night during a time most normal humans can't perceive, feeding on the minds of the weak. You're tasked with balancing your dual life -- average schoolkid by day, darkness-crushing warrior by night -- all while unravelling secrets behind a dark past and a terrifying future. As you build your relationships during the day, the power enhances your personae at night, making party interaction vital to accomplishing your overall mission. It's bolstered by top-notch writing and characterisation, as well as a stellar English localisation that makes each and every plot twist a riveting affair.

P3P bases itself primarily on the "FES" edition of P3, which offered additional activities, combat skills, and personae to utilise over the original release. P3P sees the addition of yet more personas, new side-quests, the ability to combine personae and weaponry, and a new skill card system to help bolster the abilities of your personae. Interface and gameplay tweaks, such as the square button "instant warp" menu and the ability to directly control your teammates rather than always having the CPU decide their battle tactics, have also been imported from Persona 4. (Note that having this direct control option does make the standard difficulty level in the game much easier compared to previous incarnations -- P3 veterans might want to pick a harder setting.) With these improvements, P3P is easily the most robust edition of the game to date.

Perhaps the biggest addition to P3P, however, is the option to play as a female lead character. Choosing a girl alters the way you and others interact with one another, gives you several completely new characters to build relationships with, and introduces new plot elements to experience. You'll even have the ability to potentially alter some major story events based on your choices during gameplay -- choices that wouldn't have been available playing as the male lead. To top it off, you'll also get an excellent, re-done soundtrack with numerous fresh tunes to enjoy.

The transition to portable hardware allows P3's very lengthy adventure to be partitioned off into enjoyable bite-sized chunks, which is a huge boon, but it's not a perfect port. Visuals have been stripped back during the transition to the PSP hardware, and nothing is presented in real-time save for dungeon-crawling and combat. However, P3P is an incredibly rare title in the sense that these cutbacks actually serve as improvements in most cases. Non-dungeon maps are much less tedious to navigate with a simple "point-and-click" interface standing in for running around everywhere on foot, and the game's notoriously lengthy story sequences move much more quickly, as they're mostly illustrated with dialogue and stills rather than real-time cutscenes -- and since they're mostly dialogue-driven to begin with, they lose little in the transition. The only time the visual downgrade is unappealing is during combat and dungeon-crawling, as character and enemy models have noticeably lower polygon counts and texture quality compared to the PS2 editions.

Another disappointment is the lack of the "The Answer" epilogue story from Persona 3 FES. "The Answer" is a short adventure featuring the robotic Aigis as the lead and the other SEES members in an exploration of distorted time. It doesn't affect the main story at all (it was completely separate from the main game in P3FES), and mostly serves as an exploration of the lives and motivations of the various SEES members. While I didn't like The Answer anywhere near as much as the main story of P3, I can understand why other fans might be upset with its omission from P3P.

Despite being familiar with the game, Persona 3 Portable still managed to utterly consume me. Even when I wasn't playing it, I was engrossed in thinking about my combat strategies, my persona fusions, my friendships, and all of my teammates at SEES. I came to see these fictional characters as my friends and acquaintances, and even when I knew what was coming in the story, I felt as emotional about it as I did the first time I played. When a game has such a profound effect on me, I believe it deserves nothing less than the highest praise I can lavish upon it.