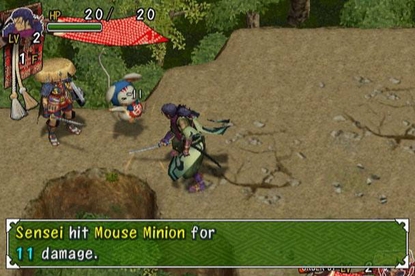 Shiren the Wanderer is an addictive and well-constructed roguelike from Atlus with a plethora of dungeons to conquer and a wide assortment of bosses.

Atlus has strictly avoided using the term "roguelike" in its marketing for Shiren the Wanderer, instead trying to push it as more of an RPG. Perhaps it's trying to avoid poor sales that all roguelikes besides the Pokemon Mystery Dungeon games succumbed to in the US, or maybe it's banking on how starved Wii owners are for RPGs of any type. Who knows? Fortunately, Shiren the Wanderer is a game good enough to satisfy both hardcore roguelike fans and RPG-lovers alike with perhaps the deepest turn-based Wii game to date.

Shiren Wii's story concerns the titular hero's attempts to unravel the mystery surrounding the Karakuri Mansion, rumoured to be full of fabulous treasures. The game splits its dungeon crawl up into several different locations, making the experience a bit easier to digest. Enormous bosses of the sort that were few and far between in earlier Shiren titles are plentiful here.

While Shiren Wii's presentation is gussied up with FMVs and cutscenes, the gameplay is fundamentally similar to the Mystery Dungeon series: Dungeons are randomly generated, challenging players to survive unpredictable gauntlets of monsters and traps using whatever they can find. The action is turn-based, which means monsters won't move until you do. Players can now carry their experience levels with them between most of the dungeons in story mode, but more difficult postgame dungeons still bust you back to level 1. On normal mode you lose all of your equipment as punishment when you die, but the new Easy Mode option lets you just revert to your last savegame instead.

There are some new game features that make Shiren Wii considerably more player-friendly than other Mystery Dungeon titles, though. You can now travel more easily between towns and dungeons segments you wish to replay through a simple world map. Storage houses have more room and you can bank your extra money, too, similar to the Izuna series. There are more item shops that sell random assortments of items between dungeons, as well as a few bonus dungeons that help you level up or trawl for better equipment.

Probably the biggest upgrade is to the companions that can help Shiren on his journey. In the DS Shiren, companions were helpful but totally unpredictable AI assistants. In this Shiren, you can completely control your allies through both a customisable AI panel and a "complete control" option that lets you micromanage every single move your entire party makes. While the AI settings are usually good enough for an average dungeon crawl, controlling your party's every move is a lifesaver in nasty boss fights and the high-level dungeons.

But even on Easy Mode, you'll still find yourself dying in wonderful and ridiculous ways. Monsters can still damage your equipment, sap your strength, and torment you with debuffs. You can starve to death, get blown up, or find your most useful items suddenly stolen by thieving monsters. Shiren Wii lacks the online aspects of Shiren DS, so there will be no player rescues to save you from a boneheaded mistake here. It's simple enough to pick up at first but grows challenging enough over time to be completely absorbing. At high levels, playing Shiren is a bit like Demon's Souls -- impossible tasks slowly become manageable and then trivial as your skill increases. Shiren the Wanderer is a hard game to put down once you've gotten into its one-more-turn rhythm, which is exactly as it should be.