Atlus Trauma Center: Under the Knife 2 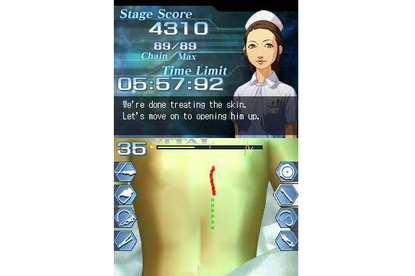 Overall, Trauma Center: Under the Knife 2 was very anti-climatic, and one would expect more from a sequel to such a huge hit.

Dr. Derek Stiles returns in Trauma Center: Under the Knife 2 on the Nintendo DS — the true sequel to the original surgical simulation!

In Trauma Center 2, you start your adventure in a third world country refugee camp trying to save less fortunate people, all the time trying to seek new information on a very deadly disease created by a terrorist group: the Delphi's. The disease in question, GUILT, is back with a new strand of Post GUILT Syndrome and past patients are in need of your experience, skill, and of course, the Healing Touch.

The game offers three different difficulty levels including an easy mode, which is a great asset for this fast paced game. Trauma Center 2 didn't change much since the first: it's still fun for the first hour, but quickly becomes repetitive; wipe, cut, remove, and repeat... that becomes your mantra as the game progresses. The poorly written dialogue is coupled with a far fetched story line that has more twists and turns than a soap opera. There is more back and forth banter between the characters than there is gameplay, and even when you do hit the ER, the gameplay becomes very boring and monotonous after a few operations. Once or twice you get to step away from the operating table and do something different like match atoms or practice your Healing Touch, but these little breaks are far too rare in the game, even if they're a nice change of scenery. The game is seriously lacking creativity, and more random mini-game-like instances is what this game needs to keep the player interested.

With procedures rarely clearly explained, frustration is quick to take over, and the time limit is just annoying. A normal operation has a time limit of 5 minutes, which doesn't seem so hard until you get stuck randomly away at the screen, trying to figure out what to do next. There are also a few instances where you must perform 3 surgeries back to back within a 10 minute window, only to fail on your last patient because you ran out of time, forcing you have to go back and restart from the very first patient. The controls are the only thing that makes this game truly playable, as they're very forgiving and feel natural to any DS player, allowing you to perform surgeries without many mistakes.