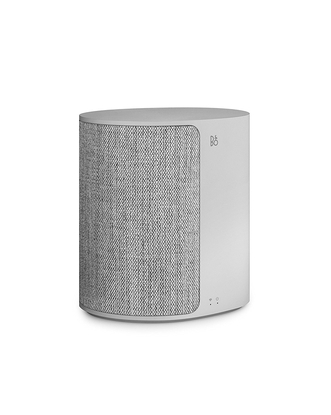 If price has kept you away from buying into this brand before now, it’ll likely still continue to do so here. Even if the M3 is one of the cheaper options on the menu, it’s still a B&O product - and B&O doesn’t do cheap.

There are always going to be those who favor function over form. However, audio mavens Bang and Olufsen have always tried to approach the sound market with more a balanced approach. Rather than dedicating themselves to the pursuit of the either best sound or the best aesthetics, they’ve asked customers the ever-appealing question of “why not have both?”

After all, do the two really need to be mutually exclusive? Even if there’s no exclusivity on that question, it’s still an ideology that bears out in the form of some pretty impressive audio products. Their latest: the BeoPlay M3.

In some ways, the M3 is very much what you’d expect out of a B&O speaker. However, that familiar isn’t necessarily always a bad thing. Especially not when you’re expecting B&O to deliver on their usual winning-combo of great design and greater sound.

The BeoPlay M3 is a wireless speaker that boasts both Wi-Fi and Bluetooth compatibility. It’s equipped with a 3.75-inch woofer, a quarter-inch tweeter and a matching set of class D 40W power amplifiers. Together, these components offer up a frequency range of 65hz - 22,000Hz.

The unit can be controlled using the B&O Play app (available on Android and iOS) and comes compatible with both Google’s ChromeCast and Apple AirPlay standards. For those who don’t want to make use of the M3’s connective proclivities, there’s also a 3.5mm audio jack and Micro USB port on the back.

As mentioned above, the M3 is a pretty traditional B&O speaker. It’s pseudo-cylindrical in shape, with a rounded grill on the front-side. This grill is matched by a set of rounded volume and power buttons on the reverse-side of the unit. Meanwhile, the ports on the box are concealed at the base of the unit under a rubber flap, contributing neatly to the almost-seamless aesthetic of the speaker. They sit alongside the secondary power and Bluetooth pairing buttons and work well enough.

Still, for the most part you’ll be controlling the speaker using your phone/tablet/generic smart device. In practice, this is easy enough, as is the initial setup using the official B&O Play app. You simply connect to the speaker using Wi-Fi and you’re ready to go. What’s more, the M3 has also been designed to seamlessly connected with other Beoplay speakers (specifically the A6, A9 and M5) via the company’s app. However, given the relative difference in size and cost between the M3 and the other options, it’ll likely end up more of an accoutrement than center-stage.

There are two optional add-ons available (wool-fabric or aluminium) for the M3 that let you cloak the grill with premium textile materials but, out of the box, the speaker arrives without such flair. The inherent flexibility of this option is nice but - as with a lot of B&O products - it’s a shame that it comes at a surcharge. You can either have a speaker that blends the backdrop of your home or one that catches the eye. However, given that the M3’s starting price sits firmly on the premium side of the fence ($449), that choice is probably going to cost you.

Out of the box, it’s easy to praise the listening experiences the M3 allowed for. However, as always, it’s worth keeping the caveats in mind. Your mileage is going to vary here based on everything from the acoustics of your setup to the audio quality of the tracks you’re trying to play. Still, generally, it sounded quite good.

All things considered, we’d rank the BeoPlay M3 pretty highly. It’s not the brand’s best but audio sounded clear, and the bass packed a sometimes-imposing punch. Unfortunately, sometimes it came across as just a little too imposing, drowning out a few of the finer details in tracks.

That said, you can get some added-mileage out of the box by messing with both the M3’s Tonetouch EQ - which allows you to create a unique sound profile using a graph-based interface - and range of presets (Party, Podcast, Lounge, and Clear). There’s also a sound-profile system that adjust the sound based on whether or not the wireless speaker is near a wall or corner.

Unfortunately, one detail that can’t be overcome using these features is the the fact that the M3 only supports mono-playback. Even if you buy two, B&O currently don’t support a stereo-sound configuration.

As with most B&O speakers, the only catch here is the price. Products like the M3 make a strong case for not compromising on audio over aesthetics and vice-versa. However, this comes with other costs - specifically price. If you’ve already bought into the B&O ecosystem with other speakers, the M3 seems like it’ll make a fine addition to the roster.

However, if price has kept you away from buying into the brand before now, it’ll likely still continue to do so here. Even if the M3 is one of the cheaper options on the menu, it’s still a B&O product - and B&O doesn’t do cheap.