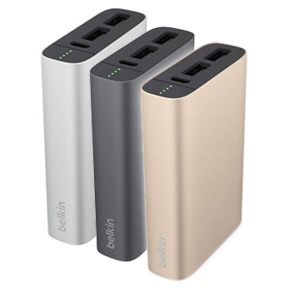 In the age of Pokemon Go, the person with the most-charged phone is king. There’s much to love about the cute critters, but as players are all too aware, the one special power that they all share is Phone Battery Vampire.

Most current phones have batteries that are around 3,000mAh in size (that’s milliamp hours). With all that GPS location data processing, mobile data sending and receiving, always on phone screen and graphics processing, even the best phones can die from fully charged in just a couple of hours.

So now there's finally a universal need for mobile power packs and Belkin’s Power Pack 6000 is potentially a great choice.

It provides an extra 6,000mAh – enough to fully charge most phones twice. It has two full-sized USB ports so it can charge two phones at once. Output is 5 Volts (the same as a standard phone charger) so be aware it won’t fast charge anything and tablet-charging will be slow (output is 3.4A shared across the two ports). It can be recharged via a microUSB input in the same way as most phones.

Belkin sensibly sells it mostly charged so you can use it straight out of the box. It’s very solid and looks classy with its aluminium shell. There’s even a button which lights up to four LEDs to show how charged it is. A short microUSB cable is also included.

It’s small but quite chunky and not light at 215g, but it will be a salvation to most hardcore phone users and Pokemon Go players. At $63 it’s reasonable value too.