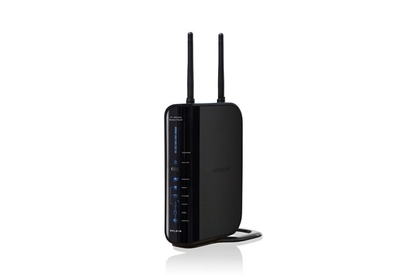 Belkin's N+ Wireless ADSL2+ Modem-Router (with USB Storage Port) (F5D8635au4A) is a good option for home users who want something relatively easy to set up. It produced good speed at long distances during our Wi-Fi tests, its modem was reliable, and we also liked its USB storage port.

The Belkin N+ Wireless ADSL2+ Modem-Router (with USB Storage Port) (F5D8635au4A) works well as an all-in-one networking solution for the home. It’s relatively easy to set up and use and it can distribute an Internet connection over its 802.11n wireless access point or through its 10/100 Ethernet switch. It even has a USB port that you can use to share the contents of an external hard drive across your network.

Set up and ease of use

For users who don’t want a separate router and ADSL2+ modem, the Belkin F5D8635au4A is ideal: you don’t have to figure out how to get multiple devices to work together. You can use the setup CD to configure the router, which will go through the wireless and ISP settings. However, it kept telling us our ISP details were wrong; we used the Web interface to make sure everything was correct.

The Web interface has a decent layout so that you can easily set up the wireless network and security settings — albeit from different pages. We recommend doing this step before entering your ISP details for your Internet connection. We were up and running in a few minutes. You can save a bit of time and effort when setting up a wireless network if your devices support Wi-Fi Protected Setup (WPS). With WPS, you don’t have to go into the Web interface to configure the wireless network; you can just press the WPS button that’s located on the front panel of the router.

We like the addition of 'connect' and 'disconnect' buttons for the Internet, which are located on the main page of the Web interface, as this is something that has been missing from previous Belkin routers. In the past, you just had to rely on the router to connect to your ISP automatically, but the addition of a connect buttons gives you more reassurance that it is actually performing that task. One thing that annoyed us though was the connection status, which sometimes did not update and showed the router as being disconnected when it wasn't.

The modem’s download speed peaked at around 17 megabits per second (Mbps) on our iiNet connection, and its upload speed was 1Mbps. Both of these are very good results on our line and are slightly faster than what iiNet’s BoB recorded. We’re quite close to the phone exchange in our area, so the speed you receive at your dwelling will vary, perhaps by a great margin. However, compared to other modems we’ve tested, the F5D8635au4A stacks up well.

A 2.4GHz wireless access point is built into the Belkin F5D8635au4A, and it managed to produce good speed at a long range during our tests. From 15m away, it recorded a file transfer speed of 4.16 megabytes per second (MBps), which is 0.79MBps faster than the Belkin Double N+ wireless router in the same test. However, from close range, the F5D8635au4A was a pinch slower: 5.53MBps compared to 5.96MBps for the Double N+ router. Overall though, the F5D8635au4A is primed to give reliable 802.11n coverage in a typical-sized apartment or small home.

For gaming, BitTorrent and any other applications that require you to forward ports, you can set this up under the ‘Virtual Servers’ heading. You can either select an application from the long drop-down list, which will enter the port number for you automatically, or you can enter the port number manually. In both instances you’ll have to enter the IP address of the machine you want the port to be forwarded to, so it’s best to set up your computers with static IP addresses.

There is an option to filter content on specific machines either by URL keywords or complete URLs. However, this didn’t work very well during our tests. In fact, it didn’t work at all as all the words and URLs were still accessible on the test PC that was meant to be filtered.

A port on the back of the router allows you to plug in a USB key or external hard drive and share it across your network. To use this USB port, you must first install the Belkin Storage Manager software on all the computers that will require access to connected keys or drives. There is no way to manage connected storage devices via the router’s Web interface. Once the software is installed, it will need to run in the background and when a drive is connected to the router it will show up as the 'Z' drive in My Computer.

Multiple users can access the same drive simultaneously, but transfer speeds will vary depending on the speed of the drive itself and whether you’re using the wireless or wired network. Copying a video off a USB stick from 10m away using Wi-Fi recorded an average transfer speed of 2.18MBps, which is much better result than we got with the Belkin N+ Wireless Storage Router, and it means you’ll quickly be able to copy files to and from the network storage location.

Any PC that has the Storage Manager software installed can read and write to an attached drive. As we mentioned in the Belkin N+ Wireless Storage Router review, we wish the interface for the Storage Manager software was better. One gripe we have is that is if you unmount the connected drive from your computer, there is no way to remount it unless you unplug and then plug in the attached device to the router again.

With good wireless range, the ability to share USB devices across multiple computers, and a relatively pain-free set up procedure, the Belkin N+ Wireless ADSL2+ Modem-Router (with USB Storage Port) is worth considering. We had a couple of problems with its filtering feature and the automatic setup, but apart from that it was stable and produced good speed during our tests.