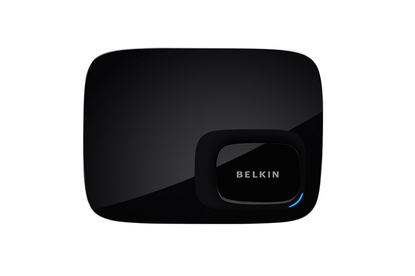 It's a hefty investment, but the Belkin ScreenCast AV4 is a good solution for wirelessly transmitting content from HDMI devices to a big-screen TV. It sends signals without compression or any other tricks, which means the audio and video quality is the same as it would be if the HDMI source was directly connected to the TV. However, its range isn't great.

Belkin's ScreenCast AV4 kit allows you to wirelessly stream an HDMI signal from almost any HDMI-enabled device to an HDMI-enabled TV. It's a nifty product that allows home entertainment gear to be placed in other areas of a room (or in a different room completely), rather than directly next to (or under) a TV. The major upside is a living room that looks a lot neater, but the downside (unless you own a Fitbit) can be having to walk further to pop in a Blu-ray or DVD.

The ScreenCast AV4 kit consists of one transmitter unit and one receiver unit. The receiver unit needs to be plugged in to the TV and it takes the signals that the transmitter sends over the airwaves and displays them on your TV. The transmitter can have up to four HDMI devices connected and stream one at a time to the receiver. Signals are sent as is, in real time, without any delay or compression and decompression.

The receiver and transmitter work together straight out of the box without a need to be paired or set up manually. When the kit is set up and all your HDMI devices are plugged in to the transmitter's ports, the only thing you'll have to do is select the transmitting port that you wish to connect to. You can rename these ports through the receiver so that you know for sure which device to connect to. For example, HDMI 1 can be renamed to 'Blu-ray', HDMI 2 to 'desktop PC' and so on. It makes it easier to figure out which port (or device) you need to use. With only one device connected to the transmitter, you'll still have to make sure that you select the correct input for it -- the receiver will not scan all ports to find it on its own.

You can plug in Blu-ray players, gaming consoles, laptops, and any other devices that use HDMI. It's even a viable solution if you want to locate your TV in an area that is not near your antenna cable -- simply place the ScreenCast AV4 transmitter near your antenna cable and plug a PVR in to it to watch TV. The transmitter includes infrared blasters so that you can still use your device remote controls, even if those devices are located in another room. The remote's signal will pass through the receiver to the transmitter and through its infrared blaster cables. These cables are loose and need to be either stuck or strategically placed in front of each attached device -- and they can be a pain to manage.

Connectivity between the transmitter and the receiver occurs in the 5GHz frequency band. While the kit performed well for a long period during my tests, I did notice that my dual-band network sometimes caused interference when it was enabled. A breaking picture and stuttering audio were immediately noticeable from my Blu-ray player when I connected laptops to my wireless network using the 5GHz band (and when letting the router choose the channel automatically). The audio and video signal returned to normal instantly when I connected those laptops to the 2.4GHz network instead and the 5GHz network was no longer in use.

Either way, if you use a 5GHz wireless network in your home, there is a chance it could interfere with the ScreenCast AV4 and cause annoying signal break-up, depending on the channels that are in use on the router. The signal will also break up if you locate the transmitter too far from the receiver, or on another floor. I got the best results when the receiver was less than 10m away and either in the same room, or in an adjacent room. I didn't have any luck getting the signal to go through a floor. Belkin claims a range of 30m, but that's only with direct line of sight.

In case your transmitter can not link up with your receiver, you can press the reset buttons on the rear of both units to re-initialise them (or you can try the 'pair' buttons). You will know if the units are not linked up because their status lights will turn from blue to red. A successful link will see both lights shine blue. I don't like the location of the channel source buttons though, which are on the right side, while the power buttons for the units are on the left side. I kept hitting the channel source because it felt more natural for the power button to be located on the right side of the unit. I do think a power button also needs to be included on the tiny remote control that is supplied with the receiver. The only use for this control is to select the input and connect and disconnect devices. If you lose this remote, you lose the ability to choose an input.

The design of both the transmitter and the receiver is flat and both units look very modern. You could stick the receiver behind your TV or place it flat on your entertainment unit. It's small enough to not be conspicuous in your living room, except for its blue LED when it's switched on.

All up, the ScreenCast AV4 is a useful solution for minimising cable clutter in a living room. It worked well for the most part in my tests with high-definition and standard-definition content, but it did stutter at times when I used my 5GHz wireless network. Its range wasn't great either and it shouldn't be expected to work well in a large home with the TV at one of the house and HDMI devices at the other end. It's very easy to set up and use and there is no tech know-how required apart from plugging in a few HDMI cables and the infrared blaster.