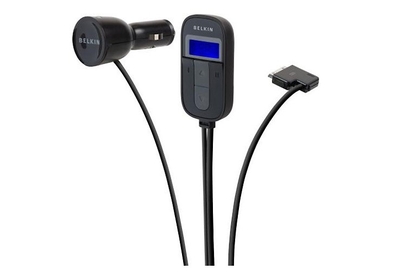 It needs a couple of extra presets and the wires are a touch messy, but otherwise, the ability to charge your iPod whilst playing it though your car stereo is an attractive one – and there’s no extra batteries!

In the TuneCast Auto for iPod, Belkin has created a simple and easy to use device, but there are too many annoying cables for our liking - and only two presets.

The TuneCast Auto's claim to fame is the fact that it powers and charges your iPod while you're on the road. Using a power adapter that plugs into any 12V auto cigarette lighter socket, the TuneCast Auto ensures your iPod will never run out of battery whilst you're on a trip. Furthermore, it doesn't require any batteries of its own, so you'll feel comfortable using the TuneCast Auto at any time during your travels - convenience personified.

The unit itself gets quite tangled; there's the power adapter, the TuneCast Auto unit itself (which includes an LCD screen) and the dock connector that plugs into your iPod. A thick cable connects these three pieces to each other so it does look quite messy, but thankfully, Belkin has provided two Velcro ties to keep the cables sorted. Also included in the box are two mounting pieces, so you can (if you wish) attach the display to your dashboard.

The TuneCast Auto works with all iPod models with a dock connector, including the recently released iPod nano and iPod Video. Setup is as easy as plugging the unit into your cigarette lighter socket and then finding a channel on your car radio with a weak or low broadcast signal. Once you've found this, simply tune the TuneCast Auto to the same frequency using the Up and Down tuning buttons. Should you wish to store this frequency, just press either the I or II buttons - that is, either preset one or two. We were disappointed to learn that there are only two presets available as many other units have a minimum of three or four. If you travel long distances you may find yourself changing frequency settings and with only two presets, this may not be enough.

The TuneCast Auto LCD display shows the current frequency selected as well as the memory slot indicator, if this is in use. Its blue backlit light is easy to read at night and even matched the blue backlit dash in our car! Volume is adjusted from your car stereo, so you won't have to use the iPod scroll wheel for this setting. In terms of sound quality, we didn't have too many issues, although do note that FM frequencies aren't the most reliable platform for music.