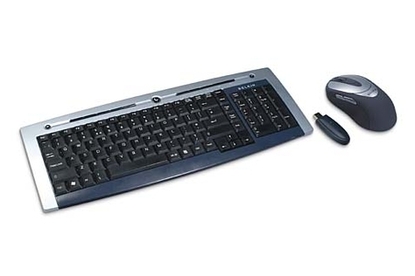 If you don’t play a lot of first person shooters then this is one of the best desktop mouse and keyboard combinations you can buy.

For many people, one keyboard is much the same as any other. For those who use keyboards day in day out for hours on end, the difference a great keyboard can make is remarkable. It can improve typing efficiency, reduce the potential for things like RSI and save you a bundle of time with shortcut keys. We found the Belkin Wireless keyboard and mouse combination to achieve all of the above things. It is a sophisticated, extremely small combination that is an absolute joy to type on.

One important thing to note is that this keyboard follows a basic laptop design, that is, the keys are slim and recessed, rather than the hulking monsters you find on a regular desktop model. When making the transition between the two, people typically find it quite difficult for a day or so, but we can promise you that by the end you'll never want to go back. Typing on this keyboard is simply phenomenal. Recently we praised the Microsoft Curve Comfort Keyboard as being a breeze to type on, but this model surpasses that with ease. It doesn't have the same ergonomic design, but the lowered keys mean the pressure required to type is greatly reduced, speeding the entire process up. We found ourselves ripping through reviews at lightning pace and our previously questionable touch typing skills jumped through the stratosphere.

Not only does the key design replicate a laptop but the layout is similarly minimalist. The arrow keys and basic functions such as Delete and Home are squashed together around the enter key, reducing the width of the keyboard by a good few inches. Transitioning between the Microsoft Desktop 6000 and this completely opened up our otherwise ridiculously messy desk. The moral of the story? Cleaning is for suckers, just buy a smaller keyboard!

Following this diminutive theme, the mouse is quite a bit smaller than the robust offerings from Logitech and Microsoft. Rather than sitting fully in our grip, we found ourselves pinching it between our thumb and fourth finger. It took a little getting used to, but we found it to be comfortable over long periods of use. If you are a hardcore gamer with big hands perhaps this isn't the most accurate way to hold a mouse so you may want to give this a miss, but we found it extremely comfortable for day to day use.

We did find that the mouse sensor lacked a little bit in terms of accuracy. Occasionally we struggled to place the cursor on the exact point we needed. It sports an 800 DPI sensor, so we were a little surprised. For most desktop tasks it will not be a problem and again gamers will be the ones to suffer here.

Size aside, the mouse sports a fairly typical design. It has two basic internet buttons located on the side, and a functional if not exceptional scroll wheel. The wheel can act like an extra button, as has become standard on most mice, but it is missing the extra two buttons by pushing it left and right.

Belkin have quite a lot of networking and wireless technology, and thus have a whole lot of experience under their belt, so we were expecting great implementation of that technology here. We were not disappointed. We suffered no wireless interference of any kind and everything operated very smoothly. The receiver Belkin has used is a simple USB Key, as opposed to the chunky, corded units that accompany some other products, which further accentuates how petite this whole package is.

Design wise the whole package looks great. A silver rim with a dark grey motif creates quite a space age impression that fits perfectly with most PCs. There is a single strip of slim shortcut keys along the top, which cover all the media functions (play, pause, track skip, volume etc) as well as links to email and zoom. There was also a bizarre key in the middle with a picture of a moon on it and no other label. "Great, a Sleep key!" we said, and hit it without a thought. Half a lost review and a rebooted computer later and what have we learned? Read the manual before pressing random buttons.