This Full HD BenQ monitor offers HDMI connectivity, making it ideal to hook up to a high-definition gaming console 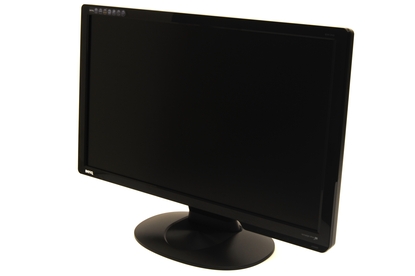 The Full HD resolution and HDMI port make the BenQ G2412HD a relatively inexpensive way to get the most out of high-definition gaming consoles. The level of image noise could be improved when the monitor is connected via HDMI, but given the asking price this monitor is a decent option.

BenQ's 24in G2412HD LCD monitor looks almost identical to the BenQ G2410HD but it adds an HDMI port. Combined with the monitor's Full HD resolution, it makes the BenQ G2412HD ideal for people who own a high-definition gaming console, such as Microsoft's Xbox 360 or Sony's PlayStation 3.

The BenQ G2412HD LCD monitor has a thin glossy black bezel and a dome-shaped base. There are more stylish monitors on the market, and the G2412HD has a glossy bezel that is irritatingly reflective. The screen itself has a matte finish. The monitor's base offers vertical tilt adjustment, but the stand isn’t height adjustable and doesn’t tilt horizontally. However, the unit is wall mountable with a standard VESA mount.

The G2410HD's controls are hit and miss. They are placed below the bezel at the bottom right of the monitor, sitting on an angle. They aren’t backlit so it's difficult to adjust settings at night, and the button placement is rather awkward.

The BenQ G2412HD has a native resolution of 1920x1080 — Full HD. Combined with its 16:9 aspect ratio and HDMI input, it means this monitor is great for watching high-definition movies. We hooked the G2412HD up to a Blu-ray player and the results were quite impressive: motion is smooth, colours are accurately reproduced and the image is crisp and clear. Our main complaint is image noise. When watching Blu-ray discs and playing games on an Xbox 360 via HDMI, the image revealed more noise than we expected. It's not a huge issue, but does detract slightly from the overall image quality.

The G2412HD also has DVI and D-Sub VGA ports. Annoyingly, BenQ doesn't include a DVI or HDMI cable in the sales package.

For regular use computer use via DVI or D-Sub the G2412HD provides good image quality and performance. We were particularly impressed by its motion handling. It has a 2ms response time when BenQ's Advanced Motion Accelerator (AMA) feature is activated and we didn't encounter any ghosting issues.

Contrast and colour reproduction are good, although fine dark details and skin tones are slightly over-saturated. The BenQ G2412HD displays text crisply with no visible aberrations.

The G2412HD's viewing angles are rated at 160/170 degrees which is fair but not outstanding. There is noticeable colour shift and detail loss when viewing the screen from off-centre.