BenQ's Joybee GP2 has a clear list of positives and a clear list of negatives. If you're the kind of person that can overlook some image quality problems in exchange for portability and connectivity -- a travelling executive or salesperson, maybe -- the GP2 would be a useful tool. Find a dark room and it's able to produce an acceptable picture for casual movie watching, although the integrated speakers aren't great at high volume.

BenQ’s Joybee GP2 is an all-round enhancement of the Joybee GP1 that debuted in 2009, with improvements to brightness, contrast and resolution while also introducing a portable battery pack that can provide up to three hours of power.

The Joybee GP2 retains the same squarish design of BenQ’s earlier GP1, with a ring of touch-sensitive buttons on the projector’s top that handle everything from power to menu navigation. Around the projector’s front a perforated fan exhaust grille sits next to the lens setup, with fine focus adjustment available through a dial on the left side. Around the back is a solitary SD card port, which acts as mass storage for the BenQ GP2 to play files from.

The projector’s right side houses all the connectors, ranging from power to audio input and output, HDMI, USB 2.0 and a multipurpose port for VGA or composite. If you’re just using an iPhone or iPod for projection, though, all you’ll need is the DC power-pack (or the optional battery) — the top-mounted iPod dock takes care of both audio and video through any compatible iPod’s 30-pin connector.

If you use the host USB port or SD card slot, the BenQ Joybee GP2 can read a variety of file types: AVI, MOV and MP4 videos, MP3, FLAC and M4A audio, PDF and Word documents amongst several others. The other USB 2.0 port means the Joybee GP2 can be connected to a PC and project video via DisplayLink. 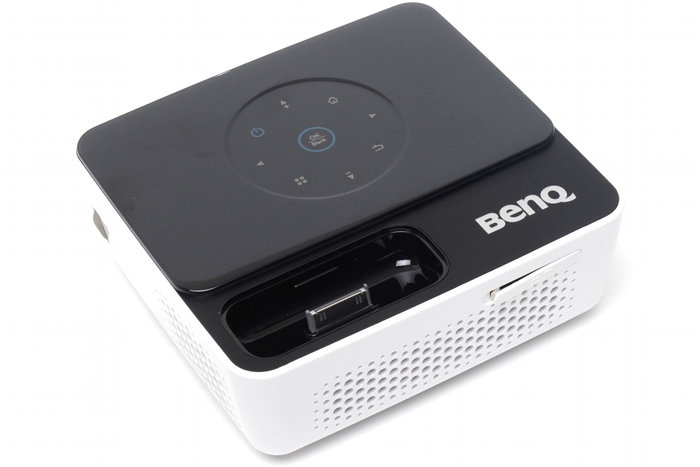 A look at the iPod dock and controls of the BenQ Joybee GP2.

Using its fixed-zoom lens, you can use the Joybee GP2 to project an image between 20in and 160in in size, although the larger you go you’ll have a corresponding drop in brightness thanks to that pesky inverse square law of physics. Automatic keystone adjustment means you’ll get a squared-off image within a 40-degree range of tilting.

We tested the BenQ Joybee GP2 in two locations: a near-black small room where we could see the best possible picture and hear the best possible sound from the projector’s speakers, and a boardroom lit by bright fluorescent lights and an overcast sky. The comparatively low brightness level of the GP2 means you’ll have to use it at full brightness unless you’re in a dim or dark environment, and brighter settings quickly begin to take their toll on image contrast and black levels.

In the dark room, the BenQ Joybee GP2 fared well. Even near its maximum screen size, the GP2’s picture is more than watchable and has good visible detail. There is some clipping of highlights and black, with a small amount of detail not visible that can be seen on a more accomplished projector or high-end plasma television. Black levels are good (an advantage of DLP over LCD) and we enjoyed watching a movie or two on it in the darkened room. 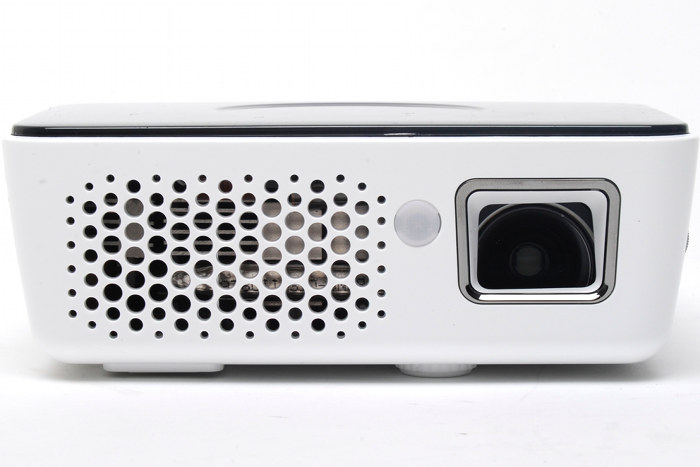 A front view of the BenQ Joybee GP2.

In brighter environments the BenQ Joybee GP2 struggles somewhat. Images wash out quickly in a fluorescent-lit room and colours can become bland and lifeless. The triple-LED setup of the GP2’s lamp simply isn’t able to produce enough light to create a clear picture in these settings - you’ll have to put up with an image that is somewhat greyed out. If you’re giving a simple presentation — graphs and text — this won’t be an issue, but movies, especially dark ones, don’t look nearly as good as they do in darker viewing environments.

A set of internal stereo speakers at 2W each do a half-decent job of producing audio to accompany whatever video you’re watching on the Joybee GP2, presuming you’re not using a better set of speakers via the audio-out headphone jack. The speakers do struggle at louder volume levels, though — we heard some distortion and crackling, and preferred the slightly better quality of the speakers in the Apple MacBook Pro we used for some of our testing.

We weren’t able to test the battery life of the Joybee GP2’s power pack against the manufacturers’ claims, we’re impressed on paper with the three hour claimed life in the Eco brightness setting. Full brightness drains the battery within a single hour, though — if you’ve got to give a couple of long presentations in a bright room, you’ll need to have a backup battery or the DC power adapter handy.

The touch-sensitive controls of the BenQ Joybee GP2.

The fan of the Joybee GP2 can get loud when you’re using the projector at its maximum brightness levels. It is, as fans go, bearable — it’s a hum without any high-pitched whirr — but it does mean you have to raise the volume of the GP2’s internal speakers, potentially into the range that introduces distortion. We’d recommend keeping the GP2 in Eco (low-brightness) mode whenever possible to reduce fan noise and lower power consumption.

The BenQ Joybee GP2 is a small and easily portable projector with a near-comprehensive range of inputs to suit a wide range of business and personal uses. It’s good in dark or dim rooms, but merely OK in brighter ones.