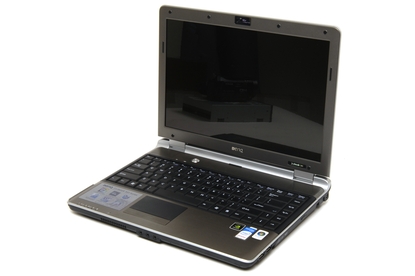 We like the steps BenQ has taken with its new range, including the HDMI port and a solid component base. We do feel that more could have been added to enhance the media aspect of this powerful machine, but otherwise it's a pleasure to use.

Alongside the Joybook S32W-PV14, BenQ's new Joybook S41 (V18) is a pleasant improvement over the previous generation of BenQ notebooks. The new design is considerably more stylish, the components are in the same ilk as any other top-quality vendor on the market and the key features, while open to improvement, show that BenQ has its eye on the needs of the expanding notebook market.

No quality notebook would be complete without Intel's latest Centrino Duo platform. The Joybook S41 offers an Intel Core 2 Duo T7300 2GHz CPU with an 800MHz front-side bus and a full 4MB L2 cache. Also under the lid, so to speak, is 1GB of DDR2 RAM and an NVIDIA GeForce 8600M GS graphics processor. All this helped the Joybook S41 to some reasonable results in our benchmarks and is a good representation of what you'd expect from a notebook at the pinnacle of the mid-range bracket. Our review model has Windows Vista Business installed, but the operating system is an option to consider when purchasing.

One key feature of the Joybook S41 is its HDMI port, which provides a digital video and a digital audio signal to your TV or home theatre. We do feel that more could have been added to boost the media aspect of this notebook, such as a media remote or even some media controls, but an HDMI port is a nice addition indeed. Although the Joybook S41 also offers a VGA port for monitors, there's no S-Video port for TV output, leaving those without HDMI ports on their TV or sound system without any alternative.

A DVD re-writer is included and there's 160GB worth of hard drive space to fill. Also featured are a 1.3-megapixel camera, a screen capture button and SRS surround sound emulation. SRS widens the sound stage to make the two speakers seem like they are further apart. The internal speakers produce a reasonable sound at acceptable volumes, but lack bass. The SRS feature provides the internal speakers with a volume boost, but was most notable when the Joybook S41 was plugged into a set of more powerful speakers. The screen has a native resolution of 1280x800 and has good contrast and brightness, though it's not exceptional. The viewing angle is about average for this price bracket, meaning it's comfortable to view the screen from a reasonable variety of angles or even share the screen with a friend.

In WorldBench 6 the Joybook S41 scored a healthy 75, which is in line with the better notebooks available today. With only 1GB of RAM installed there's always room for an upgrade if you feel the need. In our MP3 encoding tests the S41 scored as we would have expected, taking 89 seconds to encode 53 minutes of WAV files to 192Kbps MP3 files in iTunes and 131 seconds in Cdex.

In the battery test it scored a little over the average for this hardware, lasting 104 minutes in our DVD rundown test. This test drains the battery by looping a DVD, which incorporates the optical drive and the speakers for maximum strain on the battery.