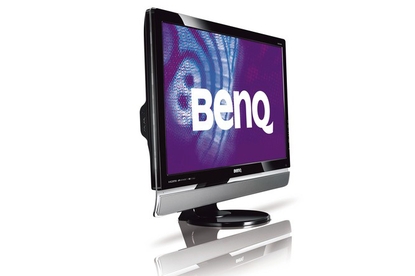 The 27-inch 1080p Benq M2700HD monitor is priced quite reasonably for home use. You can use it as a TV with the help of the inbuilt speakers and remote, and the number of input ports show that you can hook it up to a gaming console and many more display sources simultaneously. What the BenQ M2700HD might lack in image quality it makes up with its price.

You can use the BenQ M2700HD as a TV with the help of the built-in speakers and remote, and the number of input ports mean that you can hook it up to a gaming console and many more display sources simultaneously.

BenQ has an attractive product in this 27-inch wide-screen monitor. The BenQ M2700HD is really large, is priced reasonably, and is filled to the gills with features so you can use it in multiple roles in the home. You can use it as a PC monitor, as a display for your gaming console, and also as a TV set in a mid-sized living room.

Measured diagonally, the BenQ M2700HD has a display area of 27 inches (597.6x336.15mm). It offers a Full-HD (High Definition) screen resolution of 1920x1080, also known as a 1080p display with a 16:9 aspect ratio. The screen is matte, which is a good thing since you would not want to see reflections or light-glares on a big-screen while watching a movie.

The bezel is glossy black, and could have done with being a little narrower than it was, but the same factor might be a good thing if you expected to move the monitor around and wanted to be able to grip the monitor properly (it weighs 9.45 KG after all).

The BenQ M2700HD’s thickness is normal – it is not LED-backlit so isn’t very thin, nor does it use a PVA/IPS panel which might have increased the thickness quite a bit. It uses standard TN-panel (Twisted Nematic) technology with a CCFL-backlight, and offers normal viewing angles – 170 degrees horizontally and 160 degrees vertically.

Refreshingly, the stand comes attached to the BenQ M2700HD monitor right out of the box. The stand is sturdy enough to withstand slight pushes and does not wobble, it holds up the monitor at the tilt angle you have positioned it at. Expecting further features such as swivel /pivot/height-adjustment that is seen on stands accompanying smaller monitors would be unreasonable on a monitor of this size.

A normal power cable can be used with this monitor, unlike some monitors that use their own “power-brick” and power plug, so it is easier to replace the M2700HD’s power cord with a standard cable. The stereo speakers built-in to the monitor are decent, and at 10W they can be described as being slightly better than the speakers bundled into an average laptop. The volume and sound reproduction are just about alright for basic purposes.

The array of input/output ports at the rear of the BenQ M2700HD has got to be one of its highlights. It is not every day that one sees a monitor with input connectors for DVI, VGA, two HDMI ports, S-Video, Component, Composite, S/PDIF, two Audio jacks, Line-in, and an upstream USB. Output connectors include Line-out, headphone jack, and four USB ports.

The package bundled the mandatory cables (VGA, power, USB upstream) and more. A stereo cable that you can use in case you are not connected to the monitor via HDMI, for sound input and a DVI cable are both part of the package, along with the user manual and colour profile CD. You can see more details in the “Specifications” tab of this review.

The included remote is the clearest indication that BenQ expects you to not only use the BenQ M2700HD as a monitor, but also as a television and so on, the sort of use-cases that would need a remote control. From power, input-source switching and volume control, you can control it all from a distance. The remote allows for navigating through everything that the monitor’s OSD (On-Screen Display) menu offers, which can otherwise be navigated using the control buttons located at the right-lower side of the monitor bezel.

The BenQ M2700HD’s remote uses a tiny Lithium battery, of the same form-factor as the CMOS battery you’d see on a PC motherboard. The usual array of preset viewing modes and Dynamic Contrast Ratio is available, from the OSD. BenQ says this monitor’s maximum power consumption is 75W, of course you won’t reach that number if your USB ports, speakers, and screen brightness are all maxed out simultaneously.

In subjective tests, the screen was sharp and colours were pretty good but its eye-searing brightness biased the display towards looking more “warm”. The horizontal viewing angle was good as with most current TN-panel monitors, but as expected the vertical angles do not allow for watching accurate colour representations from below (while lying down to watch a movie). The “depth” of the black was not as great as that seen on BenQ’s V2220H monitor, but still tolerable. We saw very little backlight bleed at the top-right corner but the overall brightness was so overpowering that you may not even notice it unless you go to specifically look for it! In general, movies and browsing was just fine.

The monitor performed well in the objective tests, and turned in great numbers in many cases. We first calibrate the monitor using Spyder Elite 3 and its hardware-based solution, ensuring that what we see is the best that the monitor can provide. We then run a battery of tests including those from DisplayMate and Lavalys Everest, measuring them with a Chroma meter. Brightness and readability were two areas where it did exceptionally well. For more details see the “Performance” tab of this review.

Even after calibration, the screen was still a bit whiter than expected so colours may not be represented most accurately, which leaves this monitor out of possibly being chosen for graphics and Photoshop purposes where precise image reproduction is of paramount importance. Still, it is just fine for most home users, considering the price and its screen size. The BenQ M2700HD carries a three year warranty.