This home theatre projector is bright and colourful 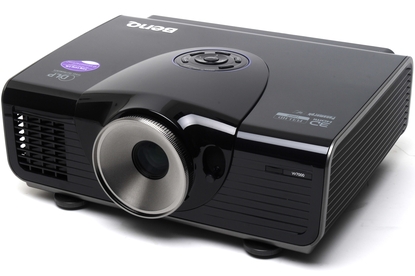 BenQ's W7000 home theatre projector makes some small sacrifices -- lamp life, fan noise -- to create an excellent picture that's both bright and with great contrast. It's got plenty of extra features built in like picture-in-picture and video smoothing, and the 3D is bright and effective. If we were picking out a home theatre projector, the BenQ W7000 would be near the top of our list.

The BenQ W7000 is a home theatre projector that’s a few hundred dollars cheaper than its direct competitors, but with picture quality and features to match or better them. We found its image quality excellent, with only a few problems disrupting our experience with it.

The big, black, glossy BenQ W7000 is designed for a dedicated home theatre — while you can run it sitting on a bench or home theatre rack, we’d recommend ceiling mounting it to keep it secure and correctly positioned. The centre-mounted lens has manual focus and zoom rings, and a horizontal and vertical shift mechanism lets you position the projected picture accurately.

We used the W7000’s lens at a moderate zoom level. It doesn’t lose much brightness at its widest setting, which can project a maximum image size of 300 inches — more than large enough for even an over-sized home theatre room. Focusing the image accurately was easy; the W7000’s focus ring is very smooth and offers plenty of fine adjustment.

A similar circular control dial to the one we saw on the BenQ Joybee GP2 controls all the functions on the BenQ W7000. For anyone ceiling-mounting the projector, BenQ’s remote control handles every function with ease. It’s back-lit, and has dedicated buttons for changing picture modes, aspect ratios, inputs and activating the 3D mode: you’ll only need to trawl through the menu rarely. With the remote control in hand we only needed to enter the menu on our initial setup; the dedicated buttons took care of everything we needed afterwards.

If you do need to enter the menus though, you’re in luck: the layout is simple thanks to the use of tabs, and there’s only ever one menu level. It’s not possible to get lost in a labyrinth of sub-menus and the location of menu options is easy to remember.

We had the BenQ W7000 projecting a roughly 100in image from a variety of sources: a Sony BDP-S580 Blu-ray player, an Apple MacBook Pro notebook, and a Microsoft Xbox 360 console.

Straight out of the box, the BenQ W7000 looks decent but unspectacular. Default sharpness in the Cinema mode (which offers the best overall default picture) is too high and the picture tends towards too green. These are easy settings to adjust though, and after doing some tweaking (lowering sharpening from 7 to 2 and dialing back green hues in the colour management, among other things) we found the BenQ W7000 a far more impressive projector.

After our calibration, the picture of the BenQ W7000 changed from decent to excellent. Skin tones especially looked life-like and accurate, easily beating out the vast majority of TVs and cheaper projectors that we’ve seen. Colours across the board were excellent, tending to be perfectly saturated while still having very fine increments of shading. These results are a testament to the quality of the BenQ W7000’s DLP colour wheel setup. DLP colour wheels come with their disadvantages, though, and one of those is the occasional appearance of a ‘rainbow effect’ for a small proportion of viewers. We didn’t experience any of this on the BenQ W7000, thankfully.

Black levels from the BenQ W7000 are good, with excellent shadow detail. During our go-to black testing scene, the opening sequence of The Dark Knight, blacks were almost perfectly black and we didn’t notice any significant instances of loss of shadow detail. We tested the BenQ W7000 alongside the Panasonic PT-AE7000, which displayed very slightly more shadow and black detail, but it was a close race. With the BenQ’s $300 price advantage we’d tend to choose it.

What is noticeable about the BenQ W7000 is the brightness of its projector lamp. At 2000 ANSI lumens we were able to get a usable picture from the projector even in a bright fluorescent-lit room, and while this isn’t an excellent test it goes to show that the W7000 would be a perfectly capable home theatre projector in a room that’s not absolutely dark. This brightness does come at the cost of a slightly noisy fan, though — for almost all of our testing we ran the projector in Eco mode to lower brightness and reduce fan speed and noise.

3D projection definitely takes its toll on brightness, though — this is when we had to have the BenQ W7000 at full power in Cinema mode. If even more brightness is needed, the Dynamic image mode gives an extra bump at the cost of colour accuracy and outright black levels. Brightness aside, the 3D mode of the BenQ W7000 was among the best we’ve seen on a home theatre projector. Projectors have lagged behind TVs in 3D smoothness and quality, but the W7000 is able to deliver a comparatively bright, clear, smooth image that has noticeable depth and reality to it. It approaches a good digital cinema projection in terms of both the depth and detail it can display: a function of our test screen size being four times bigger than a 50in TV, perhaps. The 3D glasses we were shipped with the BenQ W7000 are an optional accessory, and although they were a bit cheap-feeling and flimsy as well as being prone to fingerprints, they did a good job and we found the 3D a useable mode.

The extra processing nous required for the BenQ W7000 to display 3D also benefits 2D viewing, smoothing out fast motion content that would otherwise be jerky and jittery on a projector. This ‘CFI’ frame interpolation feature rarely misses a beat and we think it definitely contributes to 2D viewing quality on the W7000.

The BenQ W7000 is an excellent home theatre projector in almost all aspects: it’s very bright, has great colour, and its 3D performance is definitely among the best. If you can run it in Eco mode to lower the fan noise (at the cost of some brightness) and can perform a few tweaks, its picture quality is very impressive.