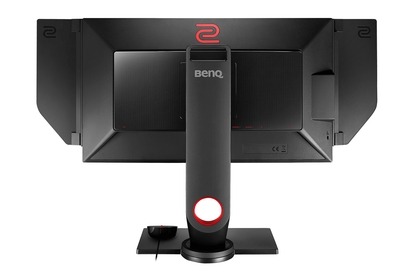 If the form-over-function approach of the XL2546 has you intrigued, it might well be the right tool for the job.

There’s a definite element of spectacle that often ends up on the table when it comes to the gaming monitor category. Regardless of the shape, size and display type involved - selling gaming monitors is all too often more about style than substance. It’s about making a dazzling debut, catching the eyes of customers and leaving them an impression. To this end, some brands try to wow with a wider color gamut, relying on next-gen technologies like OLED and QLED. Others appeal to the endless appetite for higher and higher resolutions.

By comparison, BenQ have stuck to a more tried and true course. Rather than hype up products you desperately want with buzzwords and impressive-sounding numbers, they’ve stuck to building the products that play it straight. After all, informed users know what they need, and they can clearly see it here.

Whether we’re talking about mice, keyboards or monitors - BenQ let their products speak for themselves. The BenQ Zowie XL2546 is only the latest to do so.

The BenQ Zowie XL2546 is an LCD-lit 24.5 inch 240Hz eSports Gaming Monitor that comes with a 1000:1 static contrast ratio and mounted on a height-adjustable stand. It also comes bundled with BenQ’s S-Switch (allowing you to easily save and load settings configurations) and a pair of Monitor Shield “wings” that allows users to block off their view of outside distractions.

In terms of ports, the Zowie XL2546 comes equipped with DVI, DisplayPort and HDMI 2.0 inputs. It’s also got headphone and microphone jacks alongside a trio of USB 3.0 ports.

In terms of aesthetics and the “looks” of the Zowie XL2546, there’s really not much difference between it and its most-immediate ancestor: the XL2540. It even boasts the same utilitarian shape and simple black-and-red color palette.  Like the XL2540, the XL2546 comes integrated with a unique height adjustable stand that afford you some added flexibility when it comes to finding just the right height for you.

While this isn’t exactly new, it’s worth giving BenQ a nod here for this feature. It’s arguably better than most other gaming monitor stands and adds value in areas that other vendors have overlooked in favor of more visually-appealing features. Of course, the XL2546 has also managed to replicate a lot of the same caveats as its predecessor. 24.5-inches might not be the size for everyone. Specifically, it might not be the right size for you.

If you take your gaming competitively enough to be looking at eSports monitors - then 24.5-inches does make a lot of sense. After all, it sits in a sweet spot between working with one of the most widely supported aspect ratios and offering enough screen space to enable an immersive and engaging experience. However, if you happen to favor ultra-wide or curved screens - like I do - you’ll likely find the XL2546 a little too narrow for your tastes.

Beyond these exterior and aesthetic details - the 240Hz display panel here holds up as the beating heart of the XL2546 experience. And even if BenQ are no longer the sole player when it comes to gaming monitors offering this high-end refresh rate - as was the case with the XL2540 - the benefits are still pretty clear.

Gaming experiences - particular FPS ones like Dishonored: Death of the Outsider and Wolfenstein: The New Colossus - are gorgeously smooth to behold and even more engaging to experience. It really does feel like this particular genre benefits the most from the extra Hz, though there’s nothing stopping you from applying it to other kinds of games. That said, realistically, your mileage with online gaming here is going to vary based on your system specs and internet connection. The XL2546 is a great gaming monitor but there’s only so much you can do with bad ping.

These qualities are further augmented by BenQ’s Black eQualiser and DyAc enhancement tech. The first of these, the Black eQualiser, actively works to brighten darker areas of the screen without over-exposing the rest of the display. This feature is best paired with a competitive FPS game like Counter-Strike or Rainbow Six: Siege, where spotting an enemy player in a matter of seconds can mean the difference between life, death, victory and loss. If that feature sounds immediately useful, it probably will be.

Meanwhile, the DyAc - a inclusion not featured in the XL2540 - is a rebranded take on the BenQ’s existing blur reduction technology (formerly called Firestarter). Basically, this is a form of motion smoothing designed for game experiences - allowing the display to polish over even the most erratic of FPS movements.This doesn't really feel like a game-changer - but it is definitely nice to have.

If you’re in the market for a 240Hz gaming monitor, whether or not the XL2546 is going to be the right fit essentially comes down to two questions. The first is whether you already own the XL2546. If so, then it’s probably not worth shelling out for the upgrade. The addition of DyAc is nice - but it’s not nice enough to quite justify that.

The second question that’ll make or break things is how seriously you take your online gaming? If you’re serious enough that the form-over-function approach of the XL2546 has you intrigued, it might well be the right tool for the job.