Skyrim represents the culmination of a long balancing act, of all Bethesda's learned and mastered about epic nonlinear play. It's a triumph of freeform design, less a roleplaying game like so many popular D&D-haunted others than a glimpse of what it might be like to inhabit another world, its rules and interface folding seamlessly into the gameplay instead of snapping you out of the moment with Byzantine menus and soul-numbing math. If someone asks you where games are headed, you can point to this.

You begin in a prison cart, hands bound, juddering down a mountain path as a chorus of French horns plays a mournful melody. You'll spend a lot of time navigating Skyrim's mountains — whether you're climbing through their snowy heights or just staring up their slopes, they're a physical presence unlike any you've experienced in a game. They surround you on all sides, their tops shrouded in rolling banks of clouds and reaching for what seems like miles toward the stratosphere. The clouds sometimes descend from the highest slopes, filling pine-thick valleys or rocky, scrub-covered flatland with curls of fog.

The sun pushes through those clouds as you trundle along, in the company of thieves and rebels. Bright hues cascade over woodland and ice-rimed stone, chasing away the gloom. You're a prisoner, because you're always a prisoner at the outset in an Elder Scrolls game, though never of them — they work harder to unfetter you than anything else in this genre.

And then the dragons show up, because this is a game about dragons showing up, as if to rectify their absence from prior instalments. And we're not talking the tender-bellied, winged lizards native to so many fantasy settings, but cruel-barbed, hook-mouthed horrors that can stun with ice-like cones of pure sound. Will you escape? How? And go where? The answer's...

"We have heard of those princes' heroic campaigns..."

...maybe you'll follow the so-called "main story," easily the series' most mature, but whose purpose, fittingly, seems to be as introduction to Skyrim's footpaths, locales, and wilds, after which the real story — the one you'll craft as you discover just how much unprecedented detail Bethesda's baked into every square inch of Skyrim's vast geography — can begin. Maybe you'll do your best to confound the game's logic, flaunting the law, even killing capriciously. Or maybe you'll just wander, an itinerant swashbuckler, taking work as you find it. It's hard not to wander. The game world's so thoroughly realized and lovingly rendered, well, good luck not abandoning whatever quest you're tracking just to see where the river over there goes, or what that strange light halfway up a mountain is. 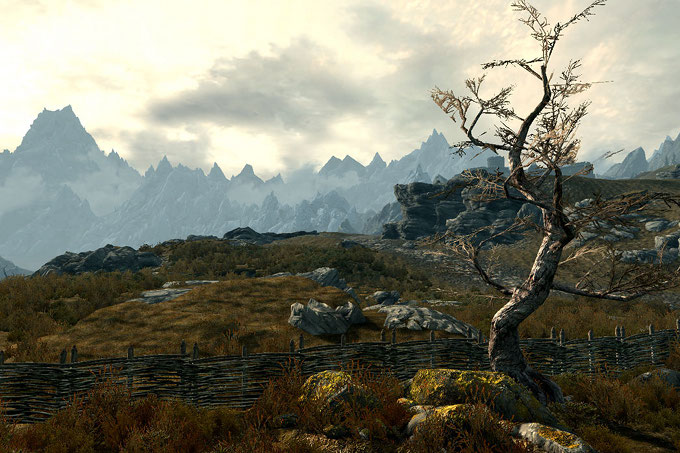