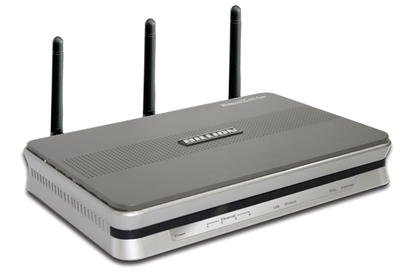 The Billion BiPac 7402NX is a smart-looking yet technically sophisticated multi-purpose wireless modem and Ethernet switch. It has several advanced features which worked as advertised, making this an attractive purchase for small business, home workers or advanced home users. It should be of particular interest to those needing 802.11n wireless, Gigabit networking and 3G failover on an ADSL2+ account.

As internet telecoms become more advanced, so do the interface choices that let us get online. In the early days of home broadband, it was sufficient to have a modem that could talk to your ISP, with USB or better, an ethernet port, to connect to your single home PC.

Now we find Wi-Fi is ubiquitous, so the modem will usually be a wireless model with various flavours of 802.11 at its disposal to dish connectivity to any laptop in the home or office. Sign up to any new home broadband account and the chances are you'll get a wireless modem thrown in.

What the Billion BiPac 7402NX model offers are additional and more modern access technologies, wrapped up in a powerful single box that can form the hub for an enthusiast's network all the way up to a small business.

First there's the ADSL2+ capability, which expands the usual 8Mb/s ceiling on POTS telephone-line broadband to a potential 24Mb/s download and 1.4Mb/s upload.

Additionally, the Billion BiPac 7402NX router offers 3G failover, whereby certain models of 3G USB dongle as supplied by your mobile phone provider can be connected to the router. This ensures that in the event of the standard broadband line going offline, the 3G wireless link will kick in to provide limited access - a potential useful standby for a business that wants the belt-and-braces security of full-time internet connectivity.

The Billion BiPac 7402NX unit resembles a standard domestic home router; unlike some professional models with socketry strewn everywhere, all technical ports are arrayed across the back panel. Here you'll find a four-port gigabit ethernet switch, the DSL input, a USB port for 3G modems, on/off and reset switches and a mini-DIN console port as an alternative configuration option.

There's also a WPS (Wi-Fi Protected Setup) button, a consumer asset that's designed to simplify the pairing of a portable wireless device to a base station.

Build quality is satisfactory for the silver-painted plastic Billion BiPac 7402NX unit, with a series of LEDs on the front to give feedback on status. Setup relies on the usual web browser interface, which we found to be relatively straightforward overall, given the complexity and facilities available on the unit.

Line speeds on our DSL2+ line were good, although reported up- and download speeds were slightly lower than with a Thomson modem supplied by Be. We were recording downloads at around 15Mb/s against our 15.5Mb/s norm, and uploads at 0.9Mb/s instead of 1.1Mb/s. This unit is also said to support Annex M protocol, increasing upload bandwidth, although we weren't able to test this on our Annex A line.

Wireless connectivity was generally good even if standard-definition MPEG streamed video could occasionally result in dropped frames, despite using an 11n setup over a close 10m range.

We found 3G connection operation slow but usable, via a Vodafone 3G modem made by Huawei; in fact we had this working before ADSL2+ due to the added complexity of setting the correct parameters for the high-speed line. UPnP also worked well, where some other routers have failed to port forward correctly in remote-access applications.