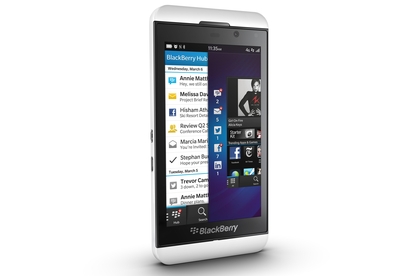 The BlackBerry Z10 has revealed what could be the company's last roll of the dice in a bid to stay relevant in the smartphone market. A lot will hinge on whether it has enough unique features to pull users away from other platforms.

New name, new smartphone, new era. That's probably the best way to describe BlackBerry right now. The Canadian giant, formerly known as Research in Motion (RIM), has just revealed what could be its last roll of the dice in a bid to stay relevant, the BlackBerry Z10.

Hands-on with the BlackBerry Z10

BlackBerry smartphones have largely been defined by physical, QWERTY keyboards, bar a few exceptionally poor efforts (we're looking at you, Storm and Storm 2) that used a touchscreen. The Z10 is all about touch, so much so that it doesn't even have a physical home button on the front.

The touchscreen itself is a 4.2in LCD with a respectable resolution of 1280x768. This gives the BlackBerry Z10 a pixel density rating of 356dpi. It's slightly less than some new and expected, upcoming full HD smartphones, but its certainly betters most current flagship devices including Apple's iPhone 5 (326ppi) and the Samsung Galaxy Note II (267ppi). The pixel density rating means the BlackBerry Z10 will display crisp, clear text with minimal aberrations, so reading on the device should be a strong point.

The design of the BlackBerry Z10 looks somewhat similar to an iPhone 5. It's thicker, larger and wider than Apple's device but round edges and similar bezel size are definitely comparable to the iPhone. It does have some distinguishable features, however, including a removable rear battery cover, a replaceable battery and a microSD card slot. All are welcome inclusions. The BlackBerry Z10 also has a hefty 2GB RAM, comes with 16GB of internal memory and is powered by a 1.5GHz dual core processor, so it's certainly not lacking when compared with the best flagship smartphones on the market.

The key aspect of the BlackBerry Z10 is clearly the software. It's the first device to use the new BlackBerry 10 operating system, which the company says has been completely revamped from the ground up. It utilises a combination of gestures to navigate around the interface with no physical back or home buttons.

The highlights of BlackBerry 10 include a main screen that's made up of eight currently open applications, a central "BlackBerry Hub" to manage all messages and notifications and new touch screen keyboard that BlackBerry says will learn and adapt to your keystrokes to offer word suggestions and predictions while typing. There's also a built-in reminders app, the ability to keep business and personal information seperate with a feature called BlackBerry Balance and a voice control system that can dial phone numbers, send messages and compose emails by voice activation.

Other features of the BlackBerry Z10 include an 8-megapixel rear-facing camera that doubles as a full HD 1080p video recorder, a 2-megapixel front-facing camera for video calls and the standard connectivity suite of GPS, Bluetooth and Wi-Fi. The Z10 is a 4G compatible smartphone in Australia.

The BlackBerry Z10 will go on sale in Australia "sometime in March" through both Telstra and Optus, but pricing and specific availability dates have yet to be revealed.

A promotional video of the BlackBerry Z10 can be seen below.

• Hands-on with the BlackBerry Z10
• New BlackBerry unveiled, but Aussies won't get a taste until March
• In pictures: BlackBerry 10 smartphones