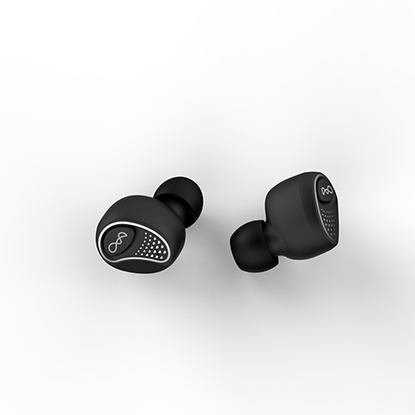 All told, the BlueAnt PumpAir True Wireless Sportsbuds emerge as one of the better value options out there for those eyeing the jump to true wireless. They’ve got outstanding battery life and the cheapest RRP around.

For a lot of people, the biggest barrier to jumping aboard the Bluetooth buds bandwagon is price. Until now, true wireless bluetooth earbuds have hovered at (and flown above) the $200 mark. For many, this is an unrealistic ask for an accessory. However, with BlueAnt’s PumpAir sports earbuds, the bar has been shifted significantly lower.

Sure, there are plenty who will swear by this or that audio brand but plenty more who are just happy to be able to listen to their music on the go. Anyone who has ever accidentally left the house without their headphones and been stuck without a soundtrack to their morning commute is probably pretty familiar with this reality. Music quality matters - but the baseline ability to listen to your music matters exponentially more.

When hitting that baseline can be done for as cheap as a couple of dollars, the argument for spending more has to be pretty strong to compel you. So, at $169, BlueAnt’s PumpAir sports earbuds are a clear front-runner when it comes to price in the true wireless earbuds space. Even if they lack on the on-board storage, noise-cancelling or refined ergonomics present in their big brand competition - they give the giants of the category a run for their money when it comes to price and battery life.

On their own, the PumpAir True Wireless Sportsbuds tout a battery life of three hours. However, as per usual, the carry-case for the earbuds doubles as a charger. All told, a full charge on the buds plus the case will net you 15 hours of continuous use.

You can find the BlueAnt PumpAir Bluetooth Sportsbuds on Amazon.

When it comes to aesthetics, BlueAnt’s PumpAir True Wireless Sportsbuds aren’t a category-best but, for the price, they do alright. At first glance, it’s a pretty simple and familiar story being sold here. These look like sports earbuds - minus the wires. They lack the futuristic streak of Sony’s WF-1000X and the eloquent ergonomics of Jabra’s Elite Sport (though they do suffer the same button-related issues).

By comparison, these sportsbuds are a little more understated. They don’t look like anything too special, just the kind of headphones you’d see someone wearing as they ran down the street.

This minimalism also extends out to the software side of things. The BlueAnt PumpAir True Wireless Sportsbuds don’t come with any sort of companion fitness or audio app. While this does put it at a disadvantage to some of the other options out there, it’s clear that the difference is attempting to be made up using price. And, for some, that difference will be enough.

Thankfully, the PumpAir True Wireless Sportsbuds are in practice more comfortable than they look. At least, a little. Weight-wise, they’re very comparable to Apple’s AirPods and - generally speaking - feel like one of the lighter true wireless ‘buds we’ve tested in the last few months.

Unfortunately, the same praises can’t really be said of the carry-case. The felt-like rubberized body of the earbuds themselves to a great job of disguising their cheapness. However, the charger case feels like a knock-off from the moment you pick it up.

In addition, BlueAnt note that the case lacks the same sweatproofing found in the earbuds themselves - which could potentially present issues later down the line.

Though BlueAnt are certainly leading with the fact that the PumpAir True Wireless Sportsbuds are noticably cheaper than a lot of the competition, this difference in price isn’t all that felt when it comes to audio quality.

To our ears, they sounded pretty similar to a lot of the competition. The bass here was a bit more punchy than the average and there was some distortion at higher volumes. However, for the most part, these are true wireless earbuds that tout all the usual pros and cons. That said, for a first-attempt, the PumpAir Sportsbuds proved surprisingly resilient to dropouts. There were a few, but the problem was hardly frequent.

The pairing process is blissfully simple and without issue. That said, the robotic voice notifications that the earbuds give to let you know when they are in pairing mode and whether or not they are connected to a device do sound very tinny and stilted. It’s not a major dealbreaker but it is a reasonably frequent reminder that you aren’t paying for the most-polished of true wireless earbuds experiences.

What you are paying for is one of the better ones in terms of battery life The BlueAnt PumpAir True Wireless Sportsbuds are fast-charge friendly, promising twenty minutes of charging for 1 hour of playtime and a full (3 hour) charge in less than 1 hour of charging. In addition, a fully-loaded case holds four more recharges. This brings their total use time to 15 hours - making second only to Apple’s Airpods.

All told, the BlueAnt PumpAir True Wireless Sportsbuds  emerge as one of the better value options out there for those eyeing the jump to true wireless. They’ve got outstanding battery life and one of the cheapest RRPs around. That cheapness doesn’t always manifest in positive ways but if you’re looking for a practical (and perfectly listenable) set of true wireless earbuds that don’t break the bank, they offer more than enough pros to balance out the cons.

You can buy the BlueAnt PumpAir Bluetooth Sportsbuds on Amazon here.