The BlueAnt Q1 headset adds another voice to your calls 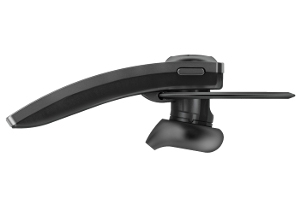 The BlueAnt Q1 is among a group of higher-cost, good-looking Bluetooth headsets that have come out for fashion-conscious users. It isn't quite comfortable enough for business users who spend most of the day on the phone, but the handy voice recognition and reasonably good audio quality makes it a good choice for consumers.

If you have problems figuring out the buttons on Bluetooth headsets, the Q1 could make things easier

The BlueAnt Q1 is one of the latest high-end Bluetooth headsets to hit the market.

What is it? Listing for US$129 (most of its rivals go for $100 or less), the BlueAnt isn't quite as vibrantly good-looking as the Jawbone Prime (although it's nicely slim and rather elegant), nor is it as comfortable or efficient as the Plantronics Voyager Pro. What the Q1 has in its favor, though, is voice control, which, on a consumer product, makes for a far easier trip -- when it works.

What does it do? The Q1 makes it obvious from the very beginning that you're dealing with a nicely idiot-proofed product. The packaging directs you to remove it, place it in your ear, and press the BlueAnt button (the main button on the unit, which, somewhat disconcertingly to those of us who dislike finding insects in our kitchen, has a picture of a tiny ant on it}.

Immediately, a pleasant male voice walks you through the process of pairing the headset with your phone. That done, you are ready to roll.

According to the company, the Q1 will pair with up to 8 devices, and offers up to 4 hours talk time and 100 hours standby. You can recharge it either via a USB cable or an AC adapter, both of which are included.

What's cool about it? The voice recognition is extremely easy to navigate, and a lot more user friendly than the sometimes-complicated patterns of button presses that other headsets demand. Want to check your battery? Say "Check battery," and the headset will tell you the state of both your headset and phone batteries. Can't remember one of the voice commands? Say, "What can I say?"

The voice recognition is so convenient, in fact, that it took me a very short time to become used to the process of inserting the Q1, pressing the button to turn it on, and say, "Call speed dial 7." I never had to take my phone out of my pocket.

Like the Voyager Pro and the Jawbone, the Q1 has a noise reduction setting, which you access by pressing the BlueAnt button during a call. While not quite at the level of that provided by the other two, it was effective enough that, when using it in a busy airport terminal, none of my callers had any problem understanding what I said (although one complained of a slight echo), and their voices were quite clear as well.

What needs to be fixed? The Q1 isn't as comfortable to wear as some of its peers #8212; such as the Voyager Pro or the Jawbone. Unlike the Jawbone, which comes with a variety of different earbud tips, the Q1 only comes with two, along with a thin ear loop. I tried the smaller of the two nubs, and eventually was only able to wear it comfortably after I also inserted the loop. In addition, the voice recognition is great when it works, but it doesn't always, especially in a noisy environment. When I first used the Q1 in the airport terminal, it kept misunderstanding what I tried to tell it to do — so, for example, when I tried "Call speed dial 7," it repeated, "Calling speed dial 8" and proceeded to dial the other number. (My mother was happy to hear from me.)

By exploring some of the menu options (which are available by saying, "Settings menu"), I eventually found that if I changed the voice sensitivity to low, the number of errors dropped precipitously.

A last interface quibble #8212; besides the BlueAnt button, the only other controls on the unit are the buttons for volume up/down. For some reason, the Q1 placed them so that volume increases if you press the button that is lower when the unit is in your ear, and increases if you press the higher button. This is so counter-intuitive that I spent several minutes on a call trying desperately to figure out why my caller's voice kept getting fainter while I tried to make it louder.