The follow up to the original Z9, BlueAnt's Z9 offers the ability to pair with multiple devices simultaneously via multipoint Bluetooth 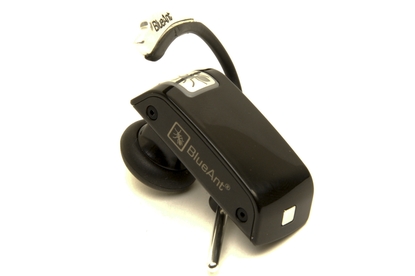 The BlueAnt Z9i slightly improves on its predecessor thanks to multipoint Bluetooth, making it one of the best Bluetooth headsets on the market.

BlueAnt's Z9 is one of the best Bluetooth headsets we have ever reviewed. The BlueAnt Z9i is the follow up model and provides the same great call quality, as well as a few new features.

The BlueAnt Z9i Bluetooth headset looks almost identical to its predecessor, with a gloss black finish on the front and matte black casing on the sides and rear. The etched BlueAnt logo and flashing LED surrounding the multifunction button (MFB) are nice touches, as is the built-in shirt clip.

Soft rubber casing around the ear bud means the Z9i is comfortable to wear for extended periods, and both small and large ear buds are included. We found the small one perfect; we were able to wear the Z9i without an ear hook when using it.

The original Z9 Bluetooth headset included only the translucent ear hook in the sales package, but BlueAnt offers an additional rubberised hook with the Z9i. Both detachable ear hooks can be worn on either ear.

The key feature of the BlueAnt Z9i Bluetooth headset is once again the patented Voice Isolation Technology, which allows users to choose between two modes of voice isolation: standard and max. The former is for normal environments, while the latter should be used if there is significant background noise. These modes can be switched during a conversation by pressing the MFB; a voice lets you know what mode you are in, either "voice isolation max", or "voice isolation standard".

We were impressed with this technology and managed to achieve crisp and clear incoming and outgoing audio when using both modes. Slight background noise is still evident, especially in particularly noisy environments, but for most part, the audio was crisp and clear in both modes. Our only complaint is the voice that informs you each time you change the isolation mode; when it plays, you can't hear incoming audio for two or three seconds.

A new addition is multipoint Bluetooth: the BlueAnt Z9i can pair up to five devices, and it can also connect to two of these devices simultaneously. If connected to two phones you can be on one call, place that call on hold and answer an incoming call on the second phone. This is done simply by holding the volume up button for three seconds. A minor complaint is that the volume buttons are firm and require a forceful press to activate.

Additional functions include activating voice dialling (provided this is supported by your phone), transferring a call from the headset to your phone, muting the microphone, activating call waiting and holding a conference call. The Z9i also assigns different ring-tones for known and unknown contacts.

The BlueAnt Z9i boasts 5.5 hours talk-time and 200 hours of standby time. BlueAnt includes an AC charger in the sales package, along with a flexible USB charger.