Bonzai3d presents a serious challenge to Google Sketchup Pro. Slightly cheaper, it also scores points by offering NURBS modelling and its own sizeable library of content and textures 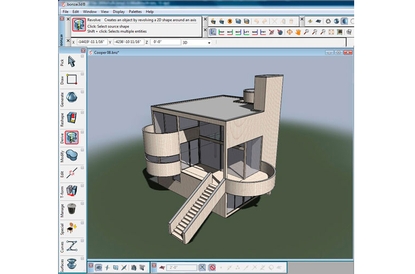 Bonzai3d presents a serious challenge to Google Sketchup Pro. Slightly cheaper, it also scores points by offering NURBS modelling and its own sizeable library of content and textures, in addition to supporting Google 3D content. However Bonzai3d only runs on Leopard on an Intel Mac, unlike Sketchup Pro, which also supports Tiger.

AutoDesSys’ Bonzai3d is a brand-new 3D sketching tool aimed at two camps: illustrators and digital artists who want to mock up scenes in 3D to create accurate-looking arrangements and perspectives for compositions, and 3D artists who want to quickly rough out scenes for clients to sign off on before beginning modelling in earnest.

Bonzai3d has inherited some of the functionality of its developer’s form•Z industrial design software, but it has its own identity.

Like Google Sketchup Pro, it offers support for Google 3D Warehouse, but ships with its own content library of trees, furniture, doors, and windows, which can be reused as symbols. It also has sketching tools. As you might expect, these are a mix between the ‘pick up and draw’ Sketchup variety and traditional primitive creation and manipulation tools found in most 3D packages – although there’s a cartoonish look to the Modelling tool palette that you don’t get in most 3D programs.

Each row in the palette contains a suite of related tools, which pops open when the cursor is positioned over the icon. Hovering over each tool or menu item brings up a description, and when the tool is clicked an Options palette appears. This can adjust settings for the tool before or after objects are created.

The sketch-like feel extends to Doodle, a rendering plug-in that gives the model in the viewport a pencil-drawn look at the click of a button. There are a number of other shading modes, including OpenGL-driven full shading with shadows. Object snapping is enabled, so it’s easy to align a brick texture exactly to a wall and to orient the brick direction horizontally, for example.

Bonzai3d offers a number of tools for the creation of NURBS curves and surfaces – features still lacking in Sketchup. There’s also the 2D Derivative tool, which can create a new face, line or edge derived from the surfaces of other objects. A 3D derivative tool begins by working in a similar fashion to Sketchup’s main extruding tool, but then adds options that allow for highly precise fine-tuning.

You can derive 2D and 3D walls in a similar fashion, while terrain models can be generated from a set of contour lines and a closed shape that represents the boundary of a site. Real time Boolean operations are also available when reshaping objects and faces. You can choose to save models in bonzai3d format or as form•z models, and most common 3D formats are supported for import and export.