The sound quality from these earbuds is exceptional, but the colour scheme is a little odd 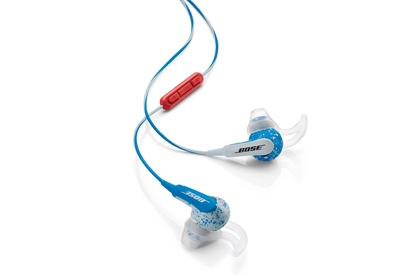 If you can get around the cringeworthy colour schemes, the Bose Freestyle in-ear headphones will prove a valuable long-term investment. We emphasise ‘long-term’ because they aren’t cheap for a set of earbuds which can very easily be damaged. Bose does include a useful zip-up wallet with the headphones which we recommend you use to ensure longevity.

Take away the limited Bose branding, and the Freestyle in-ear headphones look like the sort you’d pick up in the discount basket on the way to the checkout of your local electronics shop. But beyond the cartoonish colouring is memorable, balanced sound delivered through earbuds which sit inside the ear unintrusively.

The Freestyle headphones are available in two colour combinations. ‘Indigo’ blends navy blue with fern green, while the ‘Ice Blue’ features white and sky blue; the two colours on each model spiral up the length of the cable (which also has an iOS-compatible in-line control), completed by an unnecessary touch of red. Appearance may be a matter of preference, but both lack the contemporary-yet-casual elegance you’d expect from Bose. That said, there are bound to be consumers who like the vibrant flair; for example, they fit well with the overuse of colour on a lot of current gym clothing.

Although visually ordinary, the Freestyle headphones’ form factor is carefully crafted for comfort. This is achieved with the use of a flatter and somewhat pointed tip rather than the traditional, rounded silicon tip used by most manufacturers, or the completely flat Apple-esque (both old and new) design employed by many others. The tips sit inside the ear without digging into the ear canal, and are held in place by a silicon wing (a small, medium, and large size is included with the headphones). The wings are part of the soft silicon tip, and can be manipulated to fit the contour of the inner circle of cartilage of the ear when worn. We must point out that the wings are initially a bit uncomfortable (they feel like they push outwards), but we found ourselves getting used to them after a few wears.

It isn’t a unique design, but it is one that puts the Freestyle headphones in the fitness category; their unintrusive fit means the earbuds lack a complete seal, therefore allowing external sound to enter the ears. This proves a hindrance for those of you who want an immersive experience that shuts out the external world (without blasting at maximum volume), but is beneficial for the likes of runners and cyclists when out and about. We also found the Freestyles useful in the office because we could listen to music at a lower volume while staying alert to communication with colleagues.

The Freestyle headphones deliver a level of neutrality that caters for almost all music genres. You can start at Jack Johnson (acoustic and vocals), then switch to Chrome Sparks or R3hab (electronica with a twist), and finish with Volumes (metal) without being deprived of a well-rounded, high quality experience. You wouldn't expect any less from a set of earbuds that demand a $179 investment.

That diversity is critical in capturing all the little details which make a song. “Edge of the Earth” by Volumes shows off the headphones ability to deliver a wide range of sounds without prioritising one specific frequency. The song is a busy one, which combines drumming, bass guitar, electric guitar, vocals, and sample effects. The Freestyles reproduce these elements with richness, allowing you to pinpoint exactly which instruments are at play at any given time; even the bass guitar, which can be lost by competing headphones when playing the same notes as the lead guitar, is prominent.

Switch on Jack Johnson’s “Banana Pancakes” and from the onset you hear the rain behind the intentional dominance of Johnson’s own voice. The precipitation is maintained throughout despite it being a secondary and faded element of the tune. The sounds of the acoustic guitar occupying the length of the song are crisp; chords, string squeaks and slaps are reproduced with the raw emotion the song intends, giving it a higher level of authenticity and depth, voiding the sometimes artificial feeling evoked by the mastering.

While “Banana Pancakes” sits more at the middle of the frequency spectrum, demonstrating a bunch of highs and only a touch of lows, R3hab’s “Beats Is A Booming (Original Mix)” provides a greater mix. Particularly noticeable is the rounded and spacious bass which hits several lower frequencies throughout the song. The Freestyles bass isn’t the most dynamic, but it does the job with powerful thuds.

The Bose Freestyle in-ear headphones cost $179 in Australia, and $219 in New Zealand. Note that Bose will only be selling these headphones until May 2015.