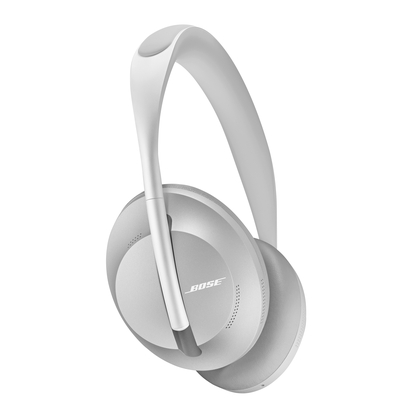 The Bose 700s find a new front that they can dominate in the war on noise but they’ve done little here to take back ground that rivals like Sony have stolen in recent years.

Should I buy the Bose Noise Cancelling Headphones 700?

The Bose Noise Cancelling Headphones 700 leverage a six microphone setup and eye-catching design to offer improved noise-cancellation for phone calls and voice assistant usage. Unfortunately, it’s difficult to weigh these strengths against the premium price that the Bose Noise Cancelling Headphones 700 command and come away happy with the trade-off.

The Bose Noise Cancelling Headphones 700 are by no means bad - but they are too expensive and do little beyond preach to the converted and those with cash to burn. They do little to take back some of the ground that rivals like Sony have sapped from Bose in recent years.

In Australia, the Bose 700 Noise Cancelling Headphones have a recommended retail price of AU$599.

The Bose Noise Cancelling Headphones 700 leverage a six microphone setup to offer improved noise-cancellation when it comes to phone calls and voice assistant use. On these fronts, it’s a game-changer.

Unfortunately, when it comes to more fundamental things like sound quality, comfort and quality of life, the Bose 700’s fail to push back in the areas where the company’s like Sony continue to take ground.

For some, this will be Boses’ best and most-expensive option. For others, it’s a high-minded product that makes one assumption too many about how much you’re willing to pay and for what.

The Bose Noise Cancelling Headphones 700 are by no means bad - but they are too expensive and do little beyond appealing to the already-converted and those with too much cash to burn.

In Australia, you can buy the Bose 700 Noise Cancelling Headphones through the following retailers:

Bose’s noise-cans rarely stray from the blueprint laid down by their iconic QC35 noise-cancelling headphones. These are the exception. Not content with just bringing new technology to the table, it feels like Bose has gone back to the drawing board when it comes to form-factor and design.

I bet, if I looked, I could find some other headphones that play with a similar look as the Bose 700s. The thing I wouldn’t wager on, however, is that these facsimiles would approach the same level of build quality, material design and sheer polish that these headphones offer.

Rather than use the same XY-foldable headband design that’s been dominant in the category for a few years now, the Bose 700s opt for a metal (but leather-laced) unibody headband that slides up and down the ear cups as needed. In addition to making the process of packing the Bose 700s away quite different to what it would be otherwise, this design gives them a very different look & feel to most of the other options.

Overall, they feel more premium, elegant and distinct. Unfortunately, they also feel more experimental. What’s more, this quality doesn’t always work in their favor. After a few weeks with them, I’m not super convinced that they’re what the future of headphones ought to look like.

Even if they never outright broke on me,I often found myself worrying that the hinges that connect the earcups to the headband would snap off. There’s a knack to packing the Bose 700s away in their carry case but I’m not particularly convinced it’s a quirk that most will find endearing or bother to learn.

When it comes to controls, the Bose 700s opt for a mix of touch capacitive earcup sensors and traditional physical buttons. I’m sure that, given enough time, I’d become comfortable enough with them to juggle these two control schemes with ease. Unfortunately, based on the few weeks with them, I didn’t find either side of this equation to be particularly intuitive or responsive.

Aside from the power / Bluetooth pairing button and the NC-toggle, I found myself relying on my phone wherever possible.

There’s also a few smaller details that bother me.

The Bose Headphones 700 charge using USB Type-C, which is always good to see, and they do boast a solid twenty hours of noise-cancellation-empowered playback per charge.

However, the lack of a regular 3.5mm output does hurt the 700s a bit in terms of flight utility. It doesn’t come with a flight adapter and you’ll have to use the audio cable in the box in order to connect it to something else - which seems like an unnecessary deviation from the standard that serves to make the Bose 700 noise-cancelling headphones just a little bit more inconvenient than some of the other options.

It’s also worth highlighting that this twenty hours of playback puts them well behind rivals like Jabra’s 85h (review here) and Sony’s WH-1000X M3s (review here).

The Bose 700s haven’t really been designed with fitness in mind. They also lack any sort of sweat proofing or water resistance. You could probably still wear them to the gym but it’s not recommended. They’re intended to silence out your next flight, office workday or morning commute.

In line with the pitch, the biggest thing that the Bose 700 bring to the table is improved noise-cancellation tech. Specifically, when it comes to voice.

Basically, Bose are betting that voice assistants like Google Assistant and Siri are popular enough that the ability of your headphones to improve or enhance the experience of using them is something you’re going to want to spend more on.

Of course, the main outcome of this investment in voice is that the six microphones built into the Bose 700s make them really good for phone calls as well. Honestly, I don’t think I’ve ever used headphones that made hands-free voice calls sound quite so good. Even on windy days, Boses’ tech did a great job of cutting through the noise and keeping me voice clear enough for the other person on the line to easily understand me.

Unfortunately, unless you’re making a LOT of phone calls on these things, I just don’t know if I’m sold that those gains are really worth the premium price point, which sets the Bose 700s apart from even the nicest noise-cancelling headphones that Sony and others are fielding.

This isn’t to say that the Bose 700s don’t cancel out enough of the outside world - but, apart from that voice aspect, they don’t sound that good. I mean, if you’re already a Bose fan, you’re hardly going to be disappointed by the audio quality. They don’t sound bad by any stretch but if you’ve used noise-cancelling headphones before, you’ll probably know what to expect. On this front, there’s nothing particularly transformational about what the Bose 700 noise-cancelling headphones nbring to the table.

What’s more, they don’t sound nearly as good as something like Sony’s WH-1000X M3s. And the easiest culprit here is AptX. The Bose 700s don’t support it. Bose told us that the reason for this is that it drains too much battery life. However, if you’re happy to spend this much on a set of headphones, it seems absurd that you wouldn't want access to high-fidelity codecs like AptX.

Stuff like Montaigne’s “Losing My Mind” sizzles with energetic punch but, even on the max, it can’t cover up the snaps and cracks of my keyboard. Ahbi the Nomand’s “Hello Stranger” swerves and swaggers when brought to life by the Bose 700’s bass-friendly drivers but, when compared to even stuff like Sony’s WF-1000XM3s, I felt like the sound quality on these headphones fell a little short of where I expected it to be based on the price-tag.

Even if the Bose 700s do offer an entirely new set of drivers compared to the QC35s, the absence of AptX support puts them on the back foot compared to their biggest competition. You don’t even get the same sort of utility found in some of the other options either.

Boses’ latest headphones are eye-catching and a must-have if you’re looking to take your hands-free voice calls to the next level. Unfortunately, it’s hard to weigh these strengths against the premium price that the Bose Noise Cancelling Headphones 700 command and come away happy with the trade-off.

The Bose 700s find a new front that they can dominate in the war on noise but they’ve done little here to take back ground that rivals like Sony have stolen in recent years. They’ve won a battle that it’d be ludicrous to mistake for a war.